Every Thursday night a six block area of downtown Palm Springs is closed off to traffic.  Street vendors set up shop to sell their wares.

Well, the weather didn’t cooperate with our plan.  We could see Mt. San Jacinto outside of our rear window, and it had a cloud hovering over it all day long.  The tram website has live tram cams which showed foggy conditions at the top.

The tram is a bit pricey at $23 per person so we didn’t want to spend the money and not be able to see anything through the clouds.  We were told by a number of people that it was definitely worth spending the money on a nice day.  I guess we’ll just have to come back some time in the future :) 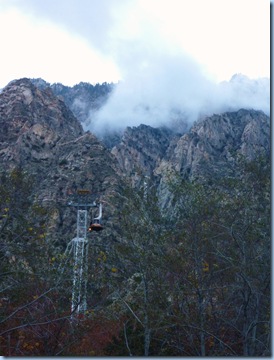 We did decide to go to the street fair.  We stopped at the tram visitor center just to check it out.  It was near dusk when we got there, but I got a picture of a tram ascending into the cloud.  It wasn’t as cloudy as it had been earlier, but we still didn’t go up because it was almost dark.  The trip is about 6,000 feet and takes 20 minutes. 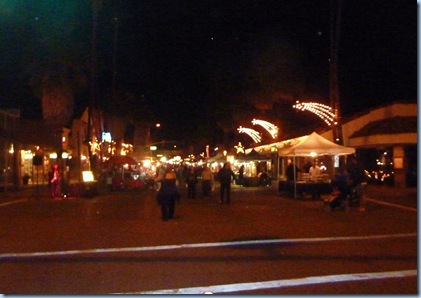 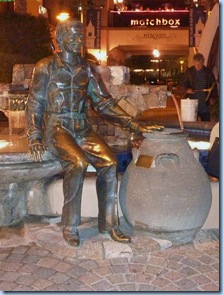 There was a fountain with a statue of Sonny Bono.  Some of you may remember him as Cher’s husband, but he was also the mayor of Palm Springs from 1988 to 1992 and a California Representative before he was killed in a skiing accident in 1998.

The fair had a wide variety of vendors selling all kinds of items including quite a few food vendors.  I bought a chocolate croissant baked by a French chef.  It was good, but not as good as the ones I had in Paris :)

We listened to several street musicians and watched an artist painting with spray paint and pieces of cardboard as his brushes.  He was amazing!

The people watching was fun, too.  But the dog watching was the best.  Lots of people had their dogs with them and there were several vendors selling dog accessories.  We saw dogs dressed as Santa, but the best was the little white long-haired pooch in a stroller wearing sunglasses :)  I wanted to take a picture, but I was afraid the owners might not like it.  It was one of the funniest things I’ve ever seen.

One guy was selling chair canopies.  They fit on all kinds of chairs, but at $35 each were a bit too expensive for our budget.

My favorite vendor was Moderustic, Inc. They had gas fire rings with glass instead of logs.  They were so cool.  This one had a water feature in the center and cost about $2,400.  The picture doesn’t do it justice.  The colors were amazing. 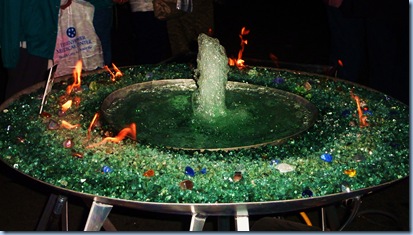 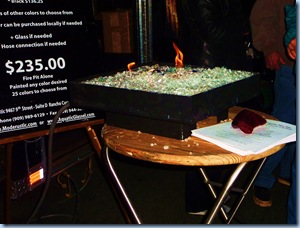 They had a portable unit specifically for RVers at a cost of $235.  Again, the picture doesn’t show the beautiful colors.  I need to get a job so I can splurge on one of these.

We left Caliente Springs around 10:30 this morning.  It’s about a two hour drive to Valley Center where we’ll be spending the next month at Woods Valley Kampground.  I think our weather luck is running out.   It’s drizzling as we drive and rain is forecast for the next 5 days.  I hope it’s nice when the boys come next week.