On Wednesday seven members of the quilting group here at the resort headed to Phoenix to attend a quilting trunk show presented by Jenny Doan. I was lucky enough to be part of the group.

Just a little information for those of you who are not quilters about just exactly what we were doing. First of all, Jenny Doan is a celebrity in the quilting world. She and her family own the Missouri Quilt Star Company in Hamilton, Missouri. She has hundreds of online tutorial videos on quilt making. Her story was fascinating. She spent most of her married life raising a family of seven children with her husband Ron. In 2007 when the economy tanked, they lost a large part of their retirement portfolio. They were empty nesters so she went to work doing the quilting on quilt tops others in her community had made. Her son encouraged her to post some videos on quilting topics, and a dynasty was born. They now own 17 storefronts in the downtown area of Hamilton. As with many small towns, most of the buildings were vacant. They've only been in business ten years, but now employ 400 people and have brought Hamilton back to life. Many quilters flock to their shops every year to meet Jenny, shop for everything quilt related, and attend workshops. This is Jenny. 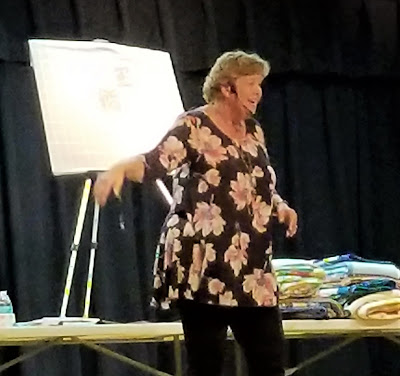 A trunk show is where a quilter shows lots of sample quilts they have made. Jenny spent about an hour and a half showing some of her quilts and telling us how easy they are to make. She was a great speaker with lots of humor and personal stories thrown into her presentation. Her husband travels with her and helped hold up the quilts. Here are just a few of the patterns she showed us how to make. My head was spinning with ideas. 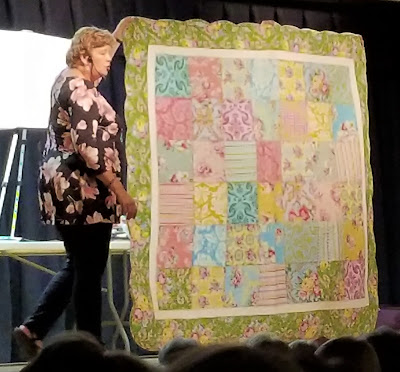 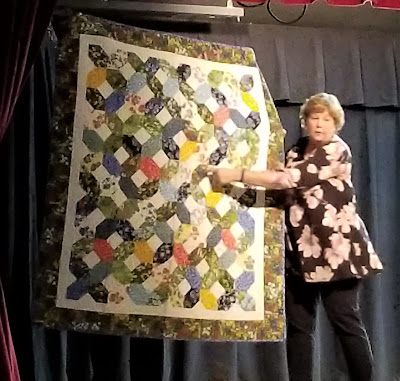 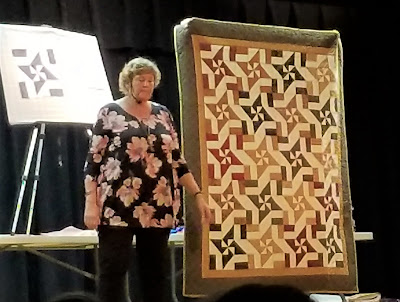 Each of the quilts was beautiful. Even though they may look complicated, Jenny has perfected techniques to make them quite easy to assemble. At the end of her presentation, she answered every single question asked from the audience of about 400 people. They she stayed and took pictures. Her husband did the picture taking with anyone who gave him a camera. Here's our group. 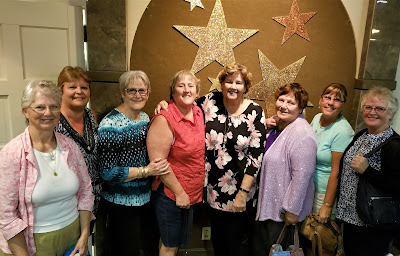 We left Yuma at 6 am that morning. We shopped at two nice quilt shops in Chandler and Mesa, suburbs of Phoenix. Then we attended the show at one of the sister RV resorts to ours in Mesa. It was a beautiful place, larger than our park. They're quilt room is to die for. We took lots of pictures, and will be encouraging the management at our park to make some improvements.

I had a really good time on the excursion with some new friends I've made in the quilting group. We got back home about 9 pm. A long, but thoroughly enjoyable day.

On Monday we joined the hiking group on a hike around Pilot Knob mountain. It's about 25 miles west of Yuma in California. In the early days when supplies were sent mostly by boat down the Colorado River, Pilot Knob was a well known reference point in their navigation. We didn't hike up it, but around it. 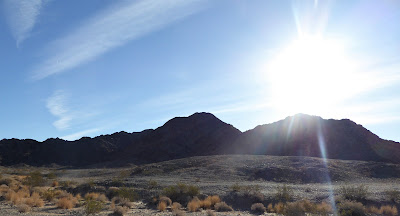 Here's our group. Kevin is in the middle at the back wearing a royal blue cap, behind the shorter lady in black with the teal cap. (You can always click on any of the pictures to enlarge them for a better look.) 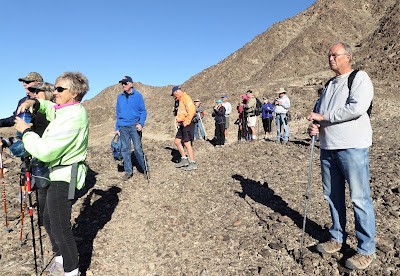 On the back side of the mountain, we had very good views into Los Algodones, Mexico. It's the border town that many snowbirds visit every winter for dental work, cheap prescription drugs, liquor and eyeglasses, along with some good restaurants, lots of margaritas and all the souvenirs your heart desires. We've been there several times over the years.

It's a small town, but I read there are somewhere between 500 and 600 dentists, the largest per capita amount of dentists in the world. Teeth cleaning is about $25 and a crown about $200. Many of the dentists were trained at colleges in the US. Some of them even live in the US, and cross the border each day to their clinic. The prices are so much cheaper because costs are much lower and the malpractice insurance is much cheaper. We've not had dental work done there, but many people we know have. I've never heard a bad word about any of the dentists there.

The parking lot on the US side is on Indian reservation land. They charge $6 a day to park, and then you just walk across the border. A nice income maker for the Native Americans. As you can see, there were many cars parked there. Lots of American and Canadian tourists flock to Algodones. 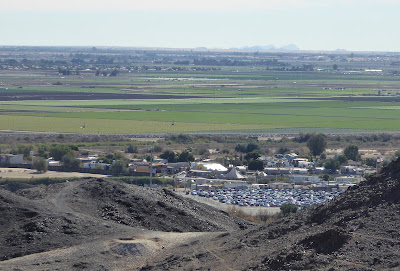 There is a long border wall that runs across much of Arizona and California along the Mexican border. Here's just a small part of it. It makes me sad to see it. I know it is a dream, but wouldn't it be wonderful if it wasn't needed or desired. 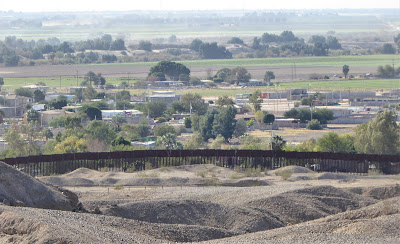 We're still working on the change I mentioned in the last post. It's coming together, and I should have definitive news in about a week. The cliff hanger continues.

The weather this winter has been phenomenal. Sunny with highs mostly in the mid 70s. Next week we will even see the low 80s. We sure are enjoying ourselves this winter.

Don’t wish upon a star – Reach for one!
Posted by RV Khronicles of Kevelyn at 9:48 AM No comments: Links to this post

As much of the country is in the big chill this winter, we have been so fortunate to enjoy some exceptionally beautiful weather here in Yuma. Temperatures have been above average, and we are becoming spoiled with consistent 70 plus temps. About every ten days, a little cold front comes through creating strong winds and temps in the low 60s for a few days. Then its right back into the mid 70s. Loving it!!!

We've been keeping busy with the same activities; golf, hiking, quilting, bocce ball, walking, biking, cards, visiting with new and old friends, and relaxing. We are also working on a pretty significant change in our lifestyle. However, it hasn't all come together, so I'm not ready to announce it quite yet. Hopefully, within the next two weeks, I will have a pretty big announcement. How's that for a cliff hanger.

There are about 1,200 sites at this RV resort. Most every site has some type of tree in front of it. I'm not sure what the name of the tree at our site is, but many of the sites have this same type of tree. We've been at this same site for a few years, and the tree has always looked like a bush rather than a tree. Kevin has to be very careful not to scratch the side of the truck when he parks the fifth wheel.

This winter some of the work campers have been going through the park and doing some major pruning on these trees. It is long overdue, and will help the trees grow taller, rather than bushing out. Here are the before and after pictures of the tree at our site. It should be much easier for Kevin to pull the fifth wheel out of the site this year without worrying about scratching the truck. 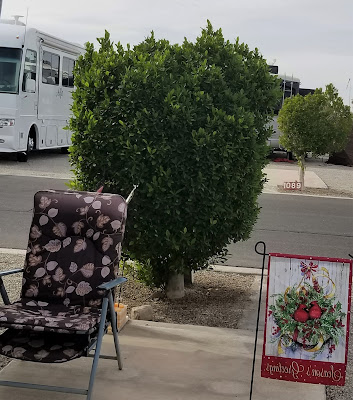 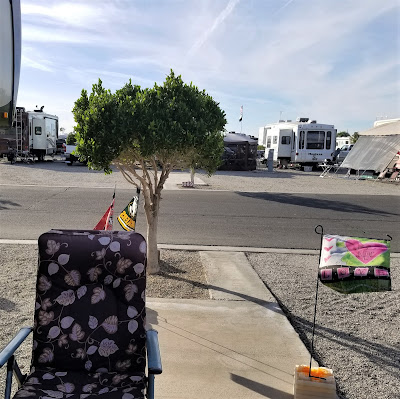 One of the facts of live at a snow bird RV resort is that many of the visitors are elderly. This year there have been several deaths at the park, and a number of people have been hospitalized; some of them having to go back home for further medical treatment.

On January 2nd, a fellow golfer died of a heart attack. Del had just finished playing nine holes of golf with the men's group and collapsed afterwards in the clubhouse. They were able to revive him, but he died on the way to the hospital. He was only 72 years old. His wife Joan is a quilter, so I have gotten to know her pretty well. Yesterday there was a celebration of life service for Del at the main hall. It reminds us that life is short, and we are so happy with the choices we have made in our lifestyle at this stage of our life.

I don't mean to be a downer, but remember to take time to smell the roses and enjoy every day!!