Yesterday we hit a small milestone. Our 2000 Pontiac Grand Am turned 200,000 miles. We bought it new in June of 2000. Kevin and I both drove it for a few years. Then, it went to our son Korey. He drove it for a few years until we became fulltimers. He then got our 2003 Pontiac Vibe with AWD which was better for him in Minnesota. We kept the Grand Am and have been using it in Wisconsin each summer as a second vehicle. In the winter we store it. 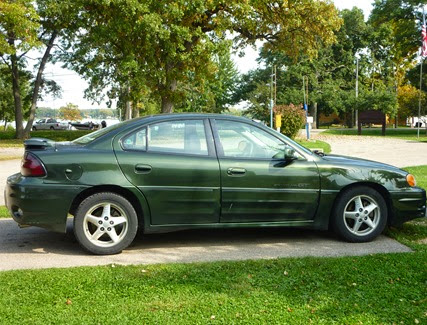 Kevin worked for Pontiac dealers his entire career. We have owned several of them, and have been very satisfied. This one has lasted the longest. None of the rest ever died; we just sold them to get something else. It makes me a little sad that Pontiacs are no longer being made.

We’ve been quite busy with lots of visitors the last two weeks. Last weekend the camping club we’ve belong to since 1981 camped at our park for the weekend. As usual, there was lots of drinking and eating going on, as well as great camaraderie. This week fulltime friends Bob and Susan from Texas spent three nights at our campground as they explored parts of southeastern Wisconsin. We were able to enjoy some happy hour time with them and have dinner at Culvers.

Tonight Kevin’s card group is coming to the park. They’ve been playing Sheepshead together for about fifteen years. A few of them are bringing their families and camping for the night. Our son Eric is part of the card group, so he will be coming as well and spending the night with us.  Busy, busy, busy!

I tend to wake up around 6 am. Kevin thinks I’m crazy, but my early morning paid off the other day. I witnessed one of the most beautiful sunrises I’ve ever seen. The picture just doesn’t do it justice. 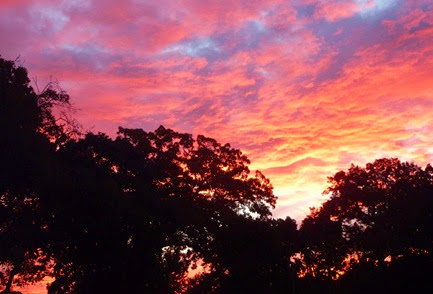 Last week I was sure surprised when I came out of Shopko and found this parked next to my car.

It’s a motorcycle pulling a coffin. The back of the coffin says Last Ryde, there is an arm hanging out the side, a very scary Chucky doll is on the back of the bike and there were all kinds of skulls on the entire thing. I guess they are ready for Halloween.

I finished another quilt that will be donated to Carol Joy Holling Camp’s quilt auction next summer. This is where our son Korey works, and I’m happy to help them out. I thought the cross theme was a good fit for a church camp. The quilt is the purple part. It’s on our bedspread which is the brown part. I should have taken the picture somewhere else. 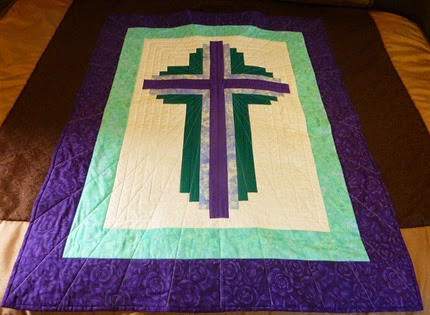 For those of you that shop at Amazon, I would ask a small favor. In the right column just under the header picture of the blog, you will see a small box with an Amazon search window. You can enter a search word or just click on the Go button. This will take you to the regular Amazon site where you can do your shopping at the same prices you would if you just logged onto their site. If you go to their site through my blog, I get a small credit for your purchases. It costs you nothing and gives me a little extra. This has nothing to do with whether we are working at Amazon or not, so the fact that we are not working there this year doesn’t matter.

Only ten days until we leave Wisconsin. We washed the fifth wheel yesterday to get it ready. Hopefully, all will go well. We picked it up in April, drove it 30 miles and have been here since. This will be our first road trip with the new unit. Keeping my fingers crossed it all works out!!

I know there are people in blog land who complain when someone writes about the weather. Sometimes, when the weather is rather drastic, I want to write about it. This week is one of those times.

Wednesday morning was warm and humid. It was 75 degrees around 2 pm. By 4 pm the temperature had dropped over 20 degrees. The last two nights have been in the mid 40s. Yesterday we reached a high of 54 degrees. That was a new record low high for the day. Today is supposed to hit only 50 with rain off and on all day. Tonight is supposed to drop to 38 degrees. I guess winter has arrived. I seem to have missed fall. Hopefully, it will make a comeback.

The past few years I have picked hickory nuts in the park and sold them on eBay. Last year, I sold acorns and hickory nuts and cleared about $500. I was all set to pick nuts again this year, but they seem to have taken a year off. There were some trees that dropped a few acorns, but nothing like we usually have. The hickory nuts are pretty much nonexistent. I guess I won’t be suffering from a backache this fall from stopping down and picking up nuts.

Last week fellow fulltimers and our good friends, Janie and John, stayed at our park for six nights. They are headed to work at Amazon in Kentucky and stopped by to visit with us. That was so nice of them. Janie and I went to the farmer’s market in Beaver Dam on Saturday morning and found some goodies. She is an avid knitter, so we also stopped at a local yarn shop where she found some treasures. We enjoyed several happy hours, some delicious meals, and some campfires. But, mostly we just enjoyed their company! 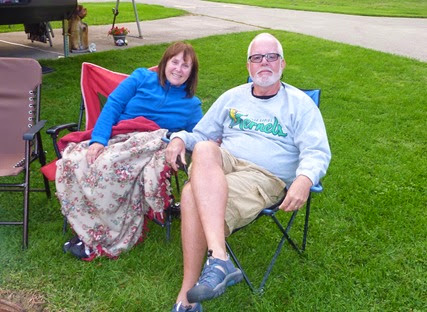 Yesterday we heard a loud noise outside. At first, I thought it was someone driving into the park. I looked out the window and saw this boat at the boat launch. It looks like one of the airboats you see in swamps. We’ve never seen this type of boat on Beaver Dam Lake. As far as I know, there are no swamps around here. You can see how cold it was from the way the person is bundled up. Probably wasn’t the best day for boating. 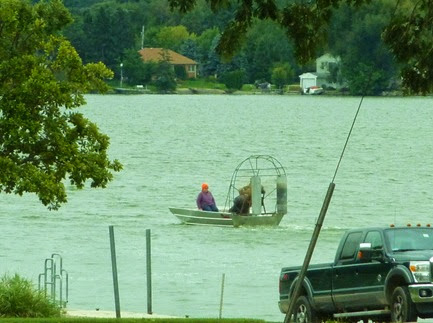 September is shaping up to be quite busy for us. We have tentative plans for some more visitors to be coming to see us at the park, as well as taking care of our annual dental visit, and some last visits with family. Before we know it, October will be here, and we’ll be packing up to leave. Based on the turn in the weather, heading south will be a good thing!!

Yesterday I was reading the blog of Kevin and Ruth, and it was mentioned that Ruth was doing the happy dance because the busy time of the season was over and they could slow down a bit in their campground managing position.

The main reason is that Amazon is in a dispute with the campground directly across the street from the warehouse, and they are not paying for the campers to stay at that campground. Although the campground is not ideal, we really appreciated the fact that we could ride our bikes to work. It was just so convenient. They also have full hook-up 50 amp pull-through sites, free wi-fi and on-site laundry. That’s all we need.

The other campgrounds in town would not take reservations. Since we were not going to be arriving until late October, we were concerned there would not be an acceptable site for us. The buzz on the Amazon Facebook page was that the other campgrounds were already mostly full. We were very concerned we would end up driving 800 miles just to find there was not an acceptable site available.

We found a great deal at the Fortuna de Oro RV Resort in Yuma, Arizona for the fall. They are running a fall special of just $595 for the months of September through December. We’ve made a reservation. Although we won’t be arriving until October, that is still a great price, and it looks like a very nice place. So, happy dancing for me!

Our campground was full for the Labor Day weekend. We have four couples that have been our friends for years bring their campers and spend the weekend with us. Although we had rain two of the days, we still had a great time. We really enjoy having visitors.

On Sunday our son Eric and some friends of his came for a visit. More good times. Everyone was commenting on how tall the corn is in the fields surrounding the park. It’s like we have a wall surrounding us. Eric and Kevin posed with me so you can see just how tall it is. I’m 5’3” and it looks like it is at least as tall as two of me. That would make it over 10 feet tall. Wow. 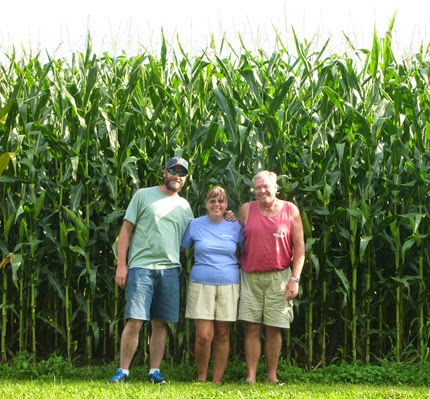 This corn was planted Memorial Day weekend. They sprayed some stuff on it as they were planting it. I’m wondering what type of steroid fertilizer they used.

This unusual looking cardinal was at the bird feeder last week. I’ve never seen such a mottled colored cardinal. Usually they are so red. I wonder if this one is molting. Sorry about the blurry picture. 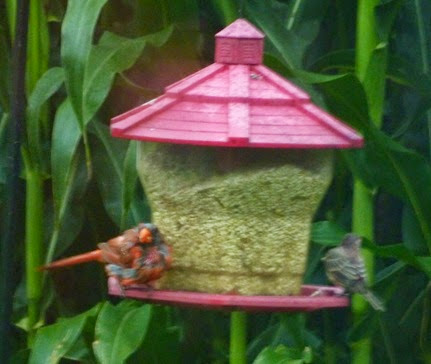