Our campground was almost full again this weekend. We only had one open site.  There was a little bit more activity than last weekend, but overall another very peaceful weekend. Have I told you we love this place!

Kevin golfed with a friend on Friday morning and that afternoon we went out for a fish fry at a place in Beaver Dam called Game On. They had a coupon for an all you can eat cod fish fry for $9.99 with a second one for half price. Well, the price was good, but the food not so much. The fish was heavily breaded and quite greasy. We won’t be going back.  Wisconsin is pretty well known for Fish Fry Friday. Most every restaurant and bar has it on their menu.  We don’t eat out often, but we do enjoy a good fish fry. We’ll keep trying new places until we find one we like. 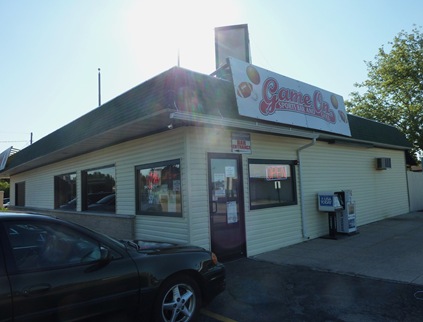 We haven’t been doing very much. It’s just been too hot and humid to really get out and be active. We have two rental paddle boats available at the park. We’ve only rented them three times so far this season. I guess no one wants to put forth the effort in this heat.  We have plans to go out in one of them ourselves, but not until it cools off.  The same goes for bike riding. There’s a bike trail not too far from us called the Wild Goose State Trail that we’d like to explore, but not until it’s cooler.  I guess we’ll be busy once this heat breaks.

I have been walking early some mornings or doing my Wii exercise program. The new EA Sports Active 2 gives me quite a workout. Much more than the Wii Fit does. I’m trying to stay fit for our job at Amazon.

I’ve been seeing signs for a Farmer’s Market in Beaver Dam so yesterday morning Kevin and I drove into town and checked it out. I bought some delicious pecan rolls from the Amish vender. They make the best bakery and it’s so reasonable. As you can see, there were several vendors, but nothing else caught our fancy. 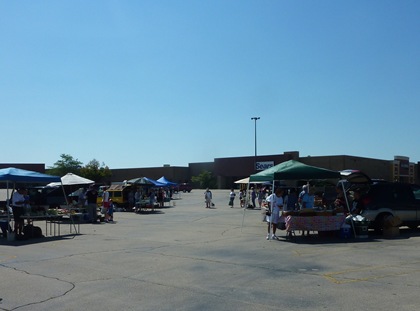 Kevin needed a new golf glove so we stopped at Dunham’s Sporting Goods. They had some great sale prices, so we both ended up with a new glove and Kevin got some covers for his irons.  I forgot my head covers in the golf cart the last time we golfed. Hopefully, someone turned them in. If not, I’ll be back at Dunham’s. You get a 10% discount with your AARP card. Being old has it’s advantages :) 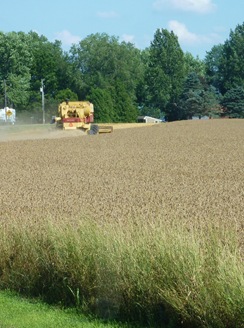 The farmer has started cutting the wheat in the field behind our camper. Even though we’ve lived in a somewhat rural area, it was mostly corn that was grown around our house. This is the first time I’m seeing a combine in action.  So far, he’s  been on the far end away from us. I’m thinking there will be quite a lot of dust and noise when he gets directly behind us.

Here he is shooting the wheat onto the tractor carts to be pulled away.  Cool! 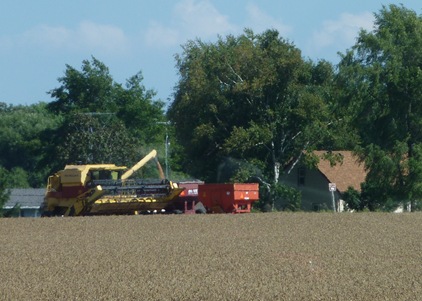 The beginning of this week is predicted to be hot again. It’s supposed to cool off later in the week, but we’ve heard that before. Maybe we’ll get in some golf late in the week, maybe not. I’ll do my two hours rocking the babies and spend a day painting at Eric’s house. Not much else going on.