We stopped in Asheville, North Carolina on our way back north because I really wanted to visit the Biltmore Estate. It is the largest privately owned home in the country with 250 rooms, including 33 bedrooms, 43 bathrooms and 65 fireplaces. In the 1880s George Vanderbilt visited Asheville with his mother and fell in love with the area. He purchased 125,000 acres of land overlooking the Blue Ridge Mountains and had a mansion built. It took six years to complete, and he moved in on Christmas Eve in 1895 as a 33 year old bachelor. He named it Biltmore from "Bildt", Vanderbilt's ancestors' place of origin in Holland and "more", for open, rolling land. 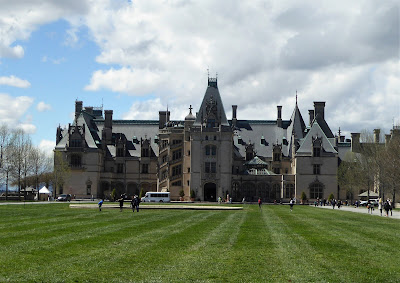 This is one of the more expensive tourist attractions we've visited. Regular admission is $65 per person, then you can pay more for special tours, audio tour, and lots of other options. They were running a special in March for a $10 discount if you wore your favorite team's apparel, which we did. Also, if you order your tickets online at least 7 days in advance, you also save $10. We purchased one 90 minute audio tour for an extra $11 which I listened to and filled Kevin in on the highlights. They give you a very nice booklet which explains much of what the audio tour covered.

I'm not one to usually spend this much on a tour, but I couldn't resist this place. I'm not alone as over 1 million visitors come each year; that averages out to over 2,700 per day. If you go, arrive early. We went at a slower time of year, and it was plenty crowded.

Upon entering, you see the winter garden room. There were lots of orchids growing in there, which I know are a hard flower to grow. Lots of gardeners working at the estate. 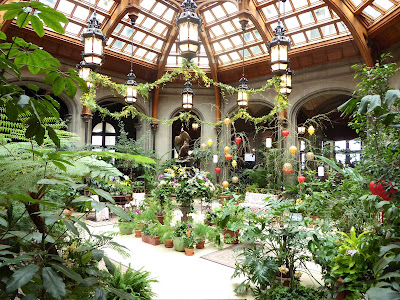 Next was the Banquet Hall. The room is so large, it's impossible to take a picture depicting the entire space. There are three fireplaces at one end, and an enormous pipe organ in the loft on the opposite side. Currently, the estate has costumes from recent period movies on display, so those are the mannequins you will see in some of the pictures. George Vanderbilt married Edith in 1898. They had one daughter, Cornelia born in 1900. Dinner usually took about two hours. 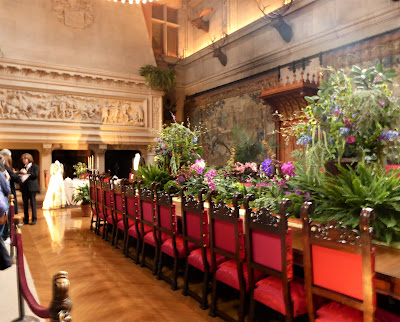 The Music Room was never completed in George's lifetime. It was a hidden room and was used by the US Government during WWII to hide treasures from museums in Washington DC. It was completed by the family in 1976. The detail in all of these rooms is amazing, from the ceilings, wall coverings, fireplaces, furnishings, window treatments and art objects. 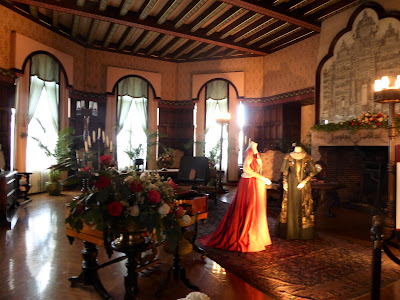 This portrait of Cornelius Vanderbilt is on display in the Breakfast Room. He was George's grandfather who borrowed $100 to buy a ferry boat and built his shipping and railroad empire into $100 million dollars upon his death. 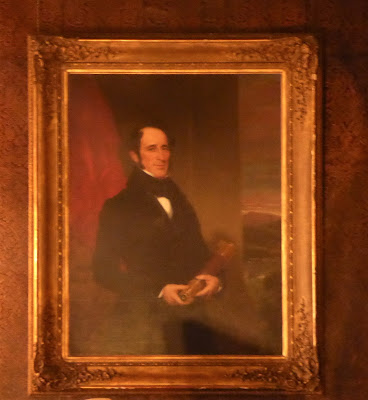 The library is a testament to George's passion for books with half of his 22,000 volume collection. The painting on the ceiling is The Chariot of Aurora, painted in the 1720s by Italian artist Giovanni Pellegrini, originally in a palace in Venice. Flash photography was not allowed, so the pictures are not the greatest. 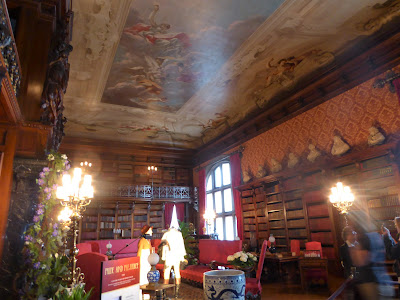 Of course, every home needs a Tapestry Gallery. This one entitled Faith is from the 1530s, and is part of a set called The Triumph of the Seven Virtues. Tapestries of this magnitude took five years to plan and design and another five years to weave. There were many tapestries throughout the entire house. 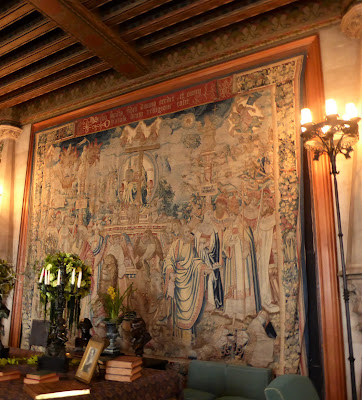 Edith Vanderbilt had a beautiful bedroom. Rich couples in their time period always had separate bedrooms with a sitting room between them. This was because both the men and women changed clothes up to six times a day with a servant helping them. The servants could not see the spouse undressed, so separate bedrooms. 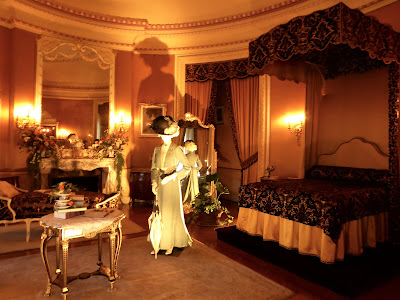 The second and third floors had many bedrooms and living rooms for guests. This bedroom called the Louis XV room was where Edith chose to give birth to their daughter. In their time, women were frequently confined for weeks before and after a birth. This room was very elegant and had beautiful views of the estate. Not a bad place to spend a few weeks. The daughter Cornelia also gave birth to her two sons in this same room. 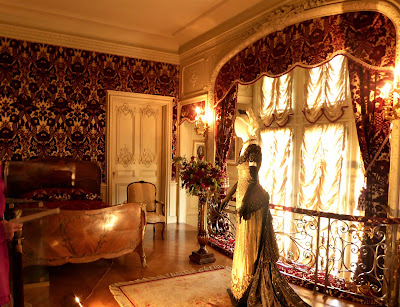 The basement level housed the three massive kitchens and some of the servants bedrooms, as well as a bowling alley, swimming pool and workout gym. 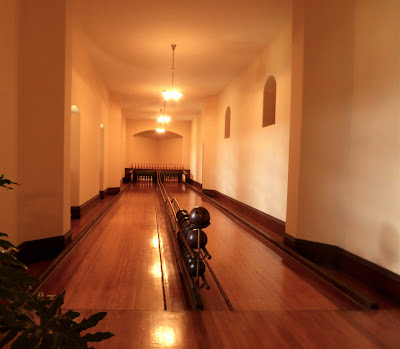 The swimming pool still has the original underwater lights, but is no longer filled with water as it leaks. Water was brought in from a nearby reservoir and heated before guests went swimming. There were no pool chemicals or filtration systems in those days, so after about three days, the water was emptied and then refilled for the next pool party. There were changing rooms for both men and women next to the pool, as it was inappropriate to walk through the house in your bathing suit. 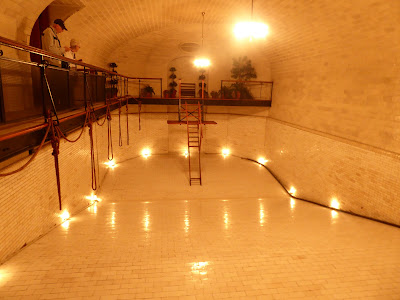 This is the main kitchen where a dozen servants were working all day to feed the family and their guests. The copper pots are original. The Vanderbilts treated their servants very well. Each had their own bedroom and were paid a good wage for the time. The estate reminded me very much of Downton Abbey. The Biltmore Estate had many modern conveniences at the cutting edge of its time such as electricity, indoor plumbing, refrigeration, central heating and electric drying racks. 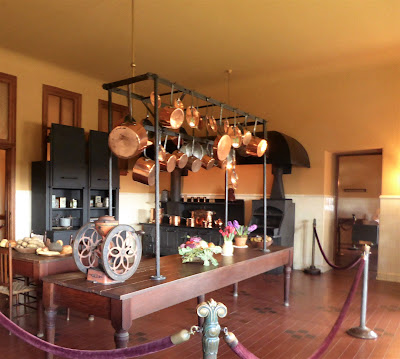 Vanderbilt hired landscape architect Frederick Law Olmsted to design his gardens. Olmsted also designed Central Park and the US Capitol grounds. The walled garden has beds of tulips and daffodils. There is also an azalea garden, but they were just starting to bloom.  There is a massive conservatory with all kinds of plants growing in the multiple greenhouses. 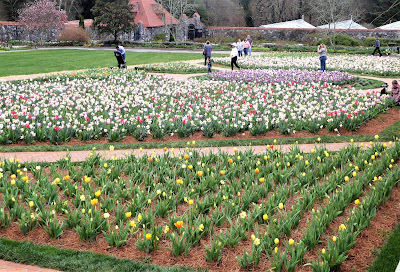 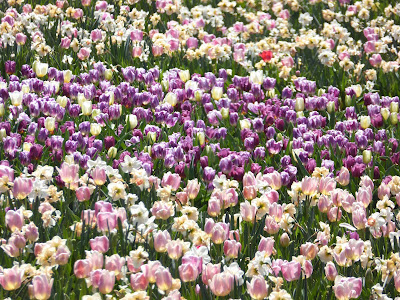 The red buds were blooming. They are one of my favorite trees. I love their lacy and delicate look. I've really enjoyed seeing all the red buds in bloom as we're heading north. 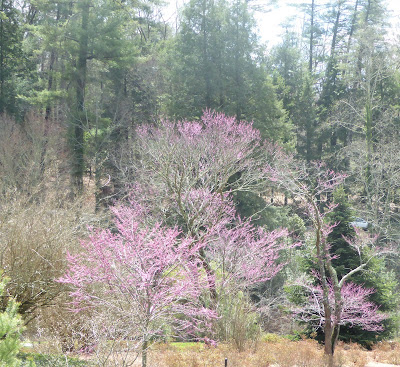 The view of the Blue Ridge Mountains from the terraces of the estate are breathtaking. I'm sure it is even more beautiful in summer and fall. If I lived near here, I would buy an annual pass to come see the gardens during the different season, and to see the house decorated for Christmas. 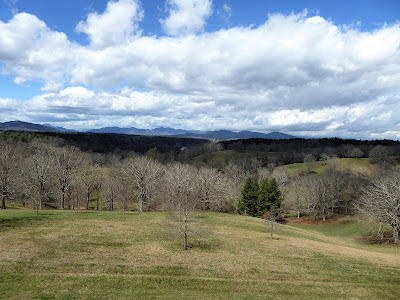 It took us over two hours to tour the house and gardens. Then we drove about 2.5 miles to Antler Hill Village and Winery on the other side of the estate. We went for a free wine tasting at America's most visited winery, The winery was established in 1985 and inspired by George Vanderbilt's passion for fine wines. The original estate was a working farm and dairy, which is how money was raised to support the estate.

There is a farm area with displays of vintage farming equipment, as well as demonstrations. We also visited The Biltmore Legacy exhibit where wedding displays showed the weddings of George and Edith and some of their heirs. Jackie Kennedy's wedding veil is on display here. It turns out Jackie wore her grandmother's veil for her wedding. A few years later, Jackie's first cousin married a Vanderbilt and wore the same veil. All of these rich families are somehow related. 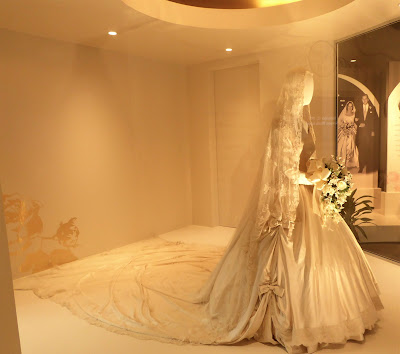 George Vanderbilt died at the age of 51 from complications of appendicitis. Edith lived on the estate for a few years, but moved away after she remarried. She sold off the majority of the land to the US government to become part of a national forest. Cornelia and her husband opened the estate to the public in 1930, responding to requests to increase tourism during the Depression and to generate income to preserve the estate.

Upon Cornelia's death, the estate was divided between her two sons. One inherited the house and 8,000 acres; the other inherited the dairy and 7,000 acres. The dairy has since been sold and the estate now covers 8,000 acres with two hotels and employs 2,000 people. The estate belongs to fourth and fifth generations heirs of George and Edith. They have certainly found a way to fund the enormous cost of keeping up such a massive property, and to share it with the public.

After leaving the estate, we made a quick stop at the Blue Ridge Parkway Visitor Center. The parkway runs for 469 miles between The Great Smoky Mountains National Park in Tennessee and Shenandoah National Park in Virginia. Roadway construction began in 1935 as a public works project to bring jobs and tourism to rural Appalachia. We watched a very informative movie about the construction of the parkway and all that can be seen along the way.

The Asheville area has beautiful scenery, and we could easily have spent a few more days exploring. However, we are on a mission to get to Lincoln, Nebraska on a roundabout trek back to Wisconsin. Our kids Korey and Cathryn have bought a home, and we are going to spend a week helping them move, paint and strip some wallpaper. Can't wait to see it.

We're spending the weekend at the East Nashville/Lebanon KOA on our way west. When we arrived, we were greeted by these residents. The rooster was doing a lot of crowing. Fortunately, he has been quiet this morning. 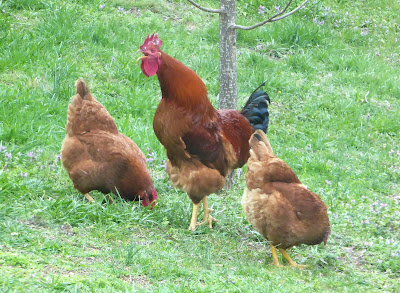 Don’t wish upon a star – Reach for one!
Posted by RV Khronicles of Kevelyn at 8:22 AM 4 comments: