You’ve all heard the saying about how one person’s junk can be another person’s treasure. If you’ve ever looked at items for sale on eBay, you would definitely agree with that saying.

This brings me to tell you about what I’ve been spending some of my time doing the last two weeks. Our park has lots of hardwood trees including hickory and oak trees. Our first year here I noticed some people were coming to the park in fall and picking something up from the ground. I asked one couple what they were doing. They told me they were gathering hickory nuts. I asked what they did with them. They told me they taste good in bakery, and that they sold some of them at flea markets.

That got me thinking. I had done quite a bit of selling on eBay when we were getting rid of the stuff in our house. Would people buy hickory nuts on eBay. Sure enough. I’ve been earning over $100 each fall just by gathering some hickory nuts in the park.

This year I thought I’d see if anyone would buy acorns. Sure enough, people were paying for acorns. We have tons of acorns on the ground in the park every year in late August/early September. In fact, we have a few sites that campers avoid this time of the year because the acorns are constantly hitting the roof of the campers.

I couldn’t believe people were willing to pay for acorns. Growing up in Wisconsin, they are everywhere. You can find them for free with just a little bit of looking. I started listing them last week, and I’ve already sold over $100 worth.

One lady in California told me she wanted them to feed to her “sweet pet squirrel”. Another buyer plants them and then sells the seedlings on eBay. A third person wanted them for a wedding favor craft. I even had a request for how much it would be to ship them to Brazil. That turned out to be $25 just for the shipping. I’ve haven’t heard back from that person.

So, a little time spent gathering acorns has certainly paid off. The hickory nuts have just started falling, so I’m gathering them as well. I hope I don’t turn into a squirrel :)

Last week my friends Sue and Judy came to visit me. The three of us used to work together at Kennedy Middle School in Germantown, Wisconsin. We went to lunch at Culver’s and then sat outside and enjoyed lots of great conversation. It was such a fun day. Sue brought a craft they’ve been doing to show me. What a cute idea for giving someone some wash clothes as a gift. 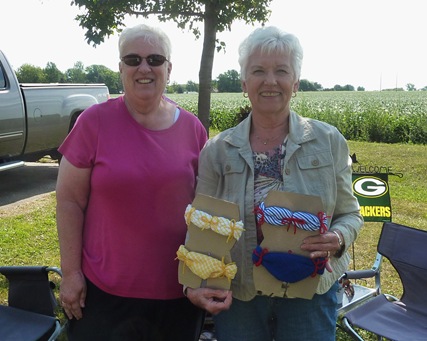 We also had five couples camp with us over Labor Day weekend. We met all of them in a camping club we have belonged to since 1981. We’ve been friends for over 15 years and always have a great time together. This time was no different. Lots of laughter, golf, card playing, games and eating. The campground was almost full for the Labor Day weekend. The weather was very nice.

This past weekend was hot again. The campground was over 1/2 full. Today and tomorrow is predicted to have temps around 90 degrees with high humidity. It’s also been very dry for several weeks. I’m ready for a fall cool down and even some rain.

We leave Wisconsin four weeks from today. Today we’re going to have our drug screens done for work at Amazon. We’ll start working there in mid-October. Then we’ll take the winter off and have some fun exploring the Gulf Shores area from Louisiana to the Florida panhandle. In January we’re going on a cruise with our kids. Lots to look forward to!

Posted by RV Khronicles of Kevelyn at 7:44 AM 2 comments: Links to this post