Today we traveled from Carlsbad, New Mexico to Amarillo, Texas along highways 285, 70 and 60. This is a route we haven’t taken before and I saw some interesting sites. 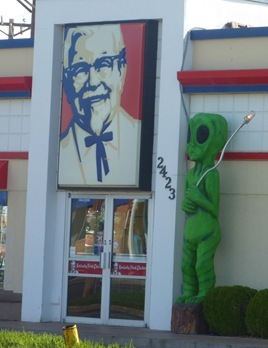 Roswell, New Mexico had lots of aliens and spaceships. Even the Colonel is hanging out with aliens.

Hereford, Texas has a sign claiming it’s the beef capital of the world. There were several areas with pens of cattle as far as you could see. I was sure sorry when I opened the window to take a picture. The smell was horrendous! 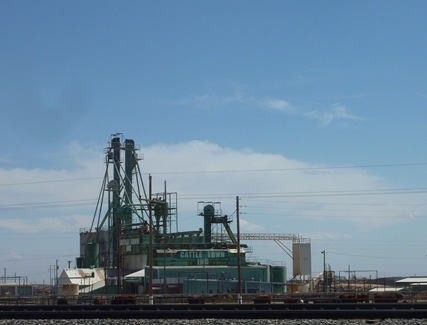 I’m not sure what town we were in when I saw the biggest cowboy I’ve ever seen. The wall along the road was in the way so I couldn’t see what he was advertising, but he sure was big. I guess they’re not kidding when they say everything is bigger in Texas. 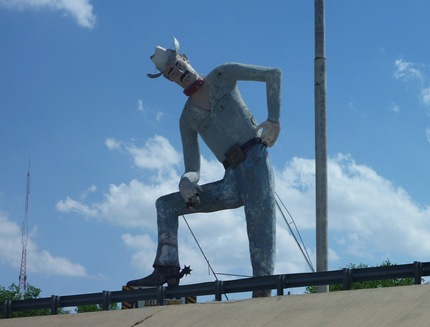 We stopped at a wayside to use the bathroom in the RV. Everything inside was fine. When we got to the campground, I had quite a surprise when I opened the door. The cabinet I keep our dishes in opened.

Our first year fulltiming we used plastic dishes. Last fall while working at Amazon I bought some Corelle dishes using our discount. They are supposed to be break resistant. Well, the eight dinner plates and six of the saucers didn’t break. However, two of the saucers shattered all over the place. There were tiny little shards all over the floor and counter. Pieces had flown everywhere. Here’s what the floor looked like when I opened the door, and that was only part of the mess.

I’ve now got a bungee cord so I can strap the cabinet door closed while we travel. We’ve only had one other instance of a cabinet door opening en route. That time some of our board games spilled on the floor with little pieces all over. I guess it’s one of the hazards to expect while traveling. 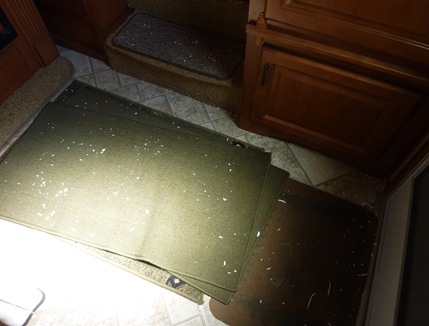 Kevin also noticed that the spring on the latch of our screen door was broken so he temporarily rigged it to work until we can get a new spring. Then he knocked over his beer. Luckily, it was already empty :)

I’m sure hoping that we used up all of our bad luck a day early since tomorrow is Friday the 13th! At least we weren’t in Amarillo yesterday. They had some massive hail in this area last night.