Yesterday we went back to downtown San Antonio for some more sightseeing.

We started at the Alamo. The Travis Letter was gone, so this time there was no line to get into the sanctuary. This building was originally a mission built in 1724 and called Mission San Antonio de Valero. In the early 1800s the Spanish military used it as a fort and named it Alamo in honor of their hometown.

We had already been here in October of 2002, so we looked around a bit and watched the movie. There were lots of school groups, and the grounds were still quite crowded.

The Alamo is located right in the heart of downtown. I read there is a law that doesn’t allow tall buildings to be built near it. If you take a close-up picture, it looks like there is nothing around it. 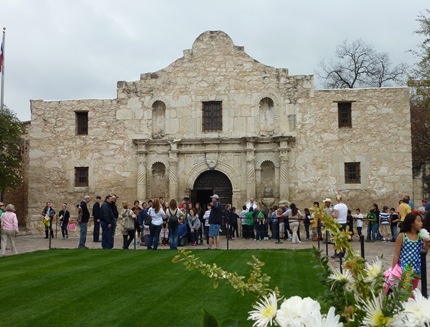 But, if you step back a bit, the view is quite different. 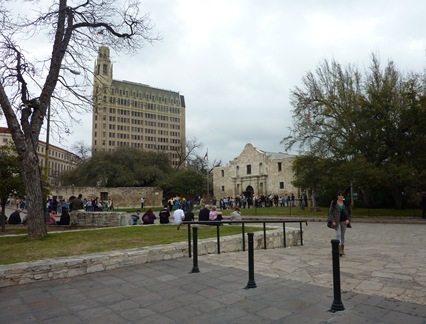 There is a bronze reproduction of The Travis Letter in front of The Alamo. I finally got a chance to read it. Travis was the commander during the famous thirteen day siege in 1836. It is a powerful letter, but I would not have stood in line for hours to see the original. 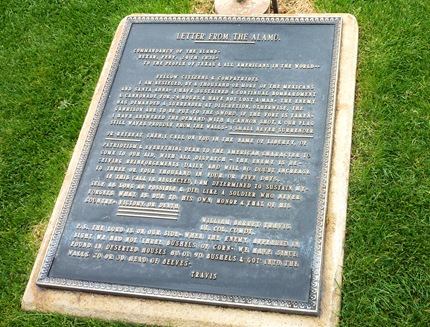 We left and went to the River Walk to have lunch at Joe’s Crab Shack. I really like crab but wasn’t going to spend $30 to $40 to eat them. They had a limited lunch menu, so I had coconut shrimp instead. It was very good. Kevin had fish and chips which was also good. Kevin also had a mug of beer. The total bill with tax and tip was $28. Now that’s more like it.

After lunch we decided to take one of the trolley tours of the city. We had already visited everything we wanted to see, but I like just listening to the narration on these tours. We had a $2 off coupon so it was $18 each for an hour tour. Our driver was very informative, and we feel we have now learned everything we want to about this city. I doubt we’ll come back. 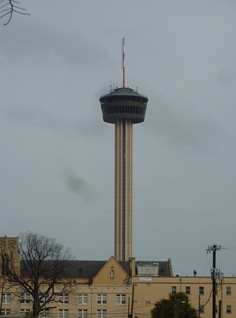 One of the points of interest on the tour was the Tower of the Americas. It was built for the 1968 World’s Fair. We went to the top while we were here in 2002. There is a revolving restaurant up there. We also learned that although the River Walk was begun in the 1940s, it wasn’t until the World’s Fair that most of the restaurants and shops were added.

After the tour, we walked a couple of miles south on the River Walk. This took us to a neighborhood called King William District. The area was inhabited by German immigrants in the 1800s. They built some beautiful homes. Our tour guide had told us that tin roofs and wrap around porches were the German style of building.

This one has been turned into a bed and breakfast. 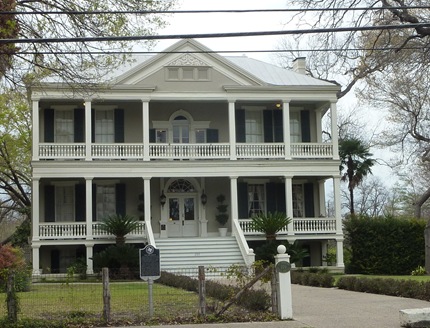 We made our way back to the main touristy area of the River Walk and had some happy hour margaritas at Café Ole. The regular price is $8, but the happy hour price is $3 and that includes a basket of chips with salsa. Since we had such a large lunch, this was all we needed for dinner. There were lots of people about on a Friday night.

Couples would probably enjoy a romantic ride in Cinderella’s carriage. I’m guessing its not a cheap date. 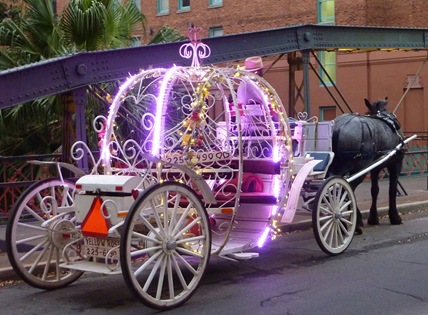 We walked around a bit more and then headed home. We definitely enjoyed visiting San Antonio again. The River Walk is really a gem. Traffic on a Friday night was a nightmare. Today we are staying home. After three straight days of touring, we need a do nothing day!