After the morning whale watching excursion in Juneau, we were taken back to the dock. There were several eagles hanging around, perched on the nearby buildings and trees. 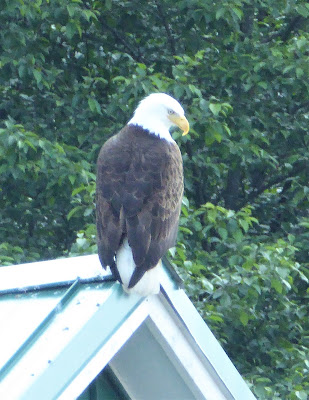 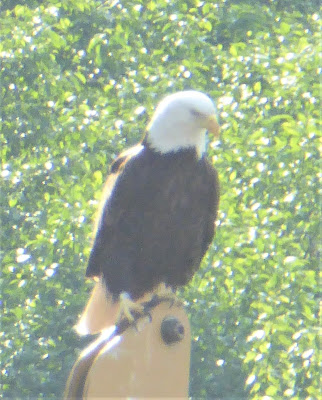 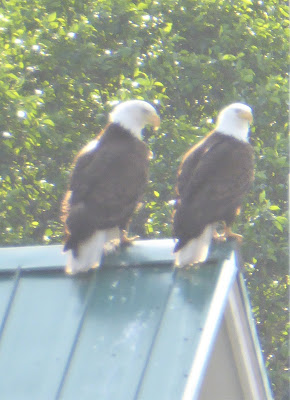 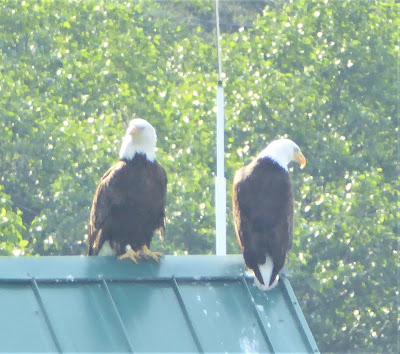 We walked about six blocks up the hill to the Alaska State Capitol Building. It was opened in 1931 as a federal building until statehood in 1959. Juneau is the only state capitol that is not accessible by road, only plane and boat. The building is old and not at all ornate as most state capitol buildings are.

There is a small park in front with a statue of William H. Seward. He was the secretary of state who organized the purchase of Alaska from Russia in 1867 for about $7 million. At the time, many believed it was a mistake and it was referred to as Seward's Folly. When gold was discovered in Alaska, it became obvious that it was a great decision. 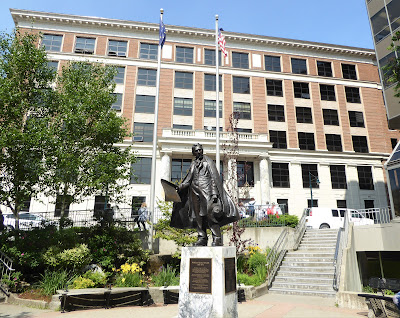 Here's the view of Juneau from the ship. As you may have noticed, all the cities we've visited are built into hills. There are a lot of hills and mountains in Alaska. 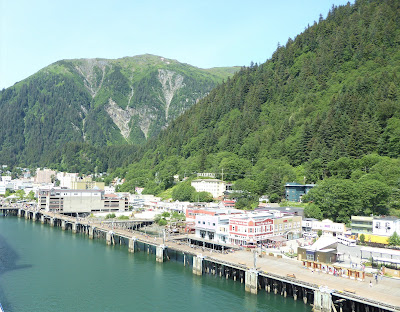 We went to a river where the salmon  have just begun arriving to spawn. The guide told us that they had seen bear there the day before, but when it's sunny the bear stay in the cool woods. No bears for us. We did see more eagles. 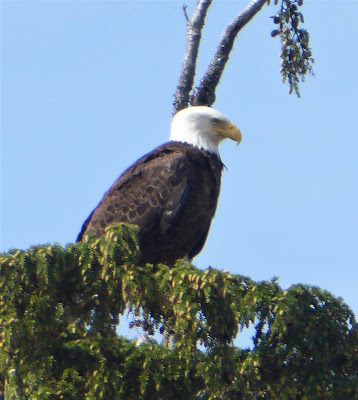 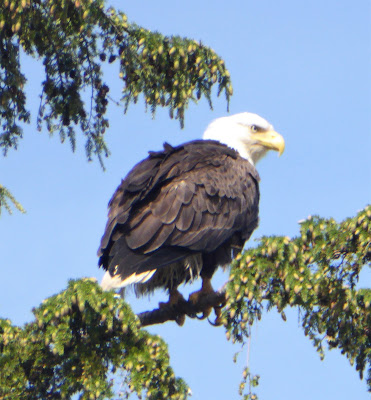 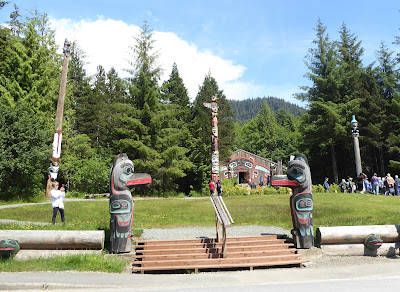 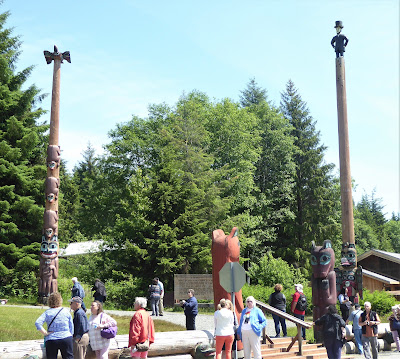 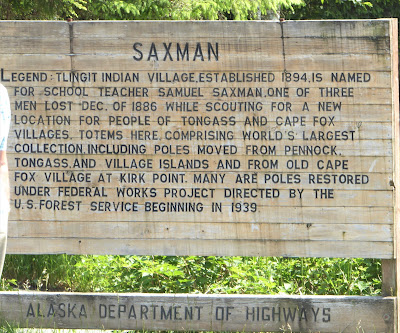 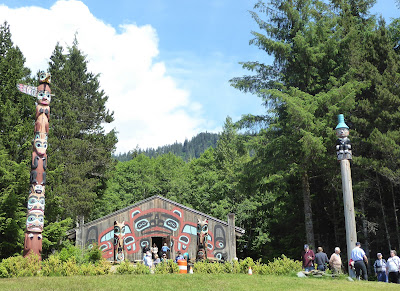 After the tour, we walked around. Ketchikan is on Revillagigedo Island, and the Ketchikan Creek runs through it. From the boardwalk, we saw these red and maroon starfish in the creek. I thought starfish were only in the tropics. 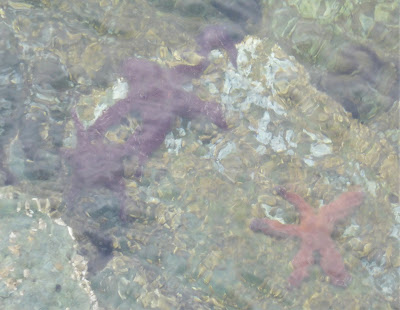 One of the oldest parts of town has been restored with lots of shops and restaurants. This was originally the red light district, and there is a brothel museum. We didn't feel the $10 per person entrance fee was worth a visit. 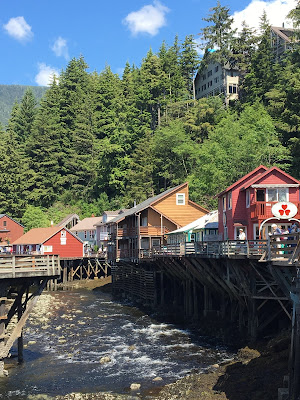 Marijuana was legalized in Alaska in 2014. I thought this was a clever name for a pot shop. 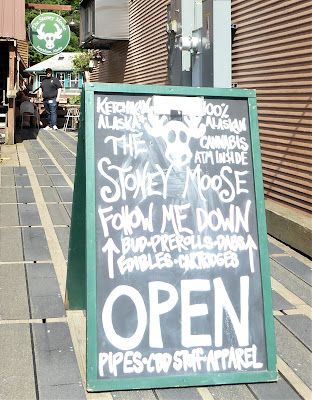 Here's the view of Ketchikan from the ship. More houses built into the hillside. 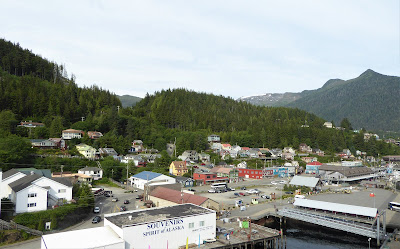 Our last day on the ship was another at sea day headed to Vancouver, Canada. It was again cool and overcast. We spent the day looking out one of the large windows watching the beautiful coast of British Columbia go by. Late in the day the clouds broke up, so I got a few nice pictures. 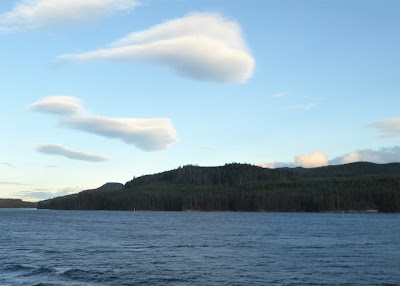 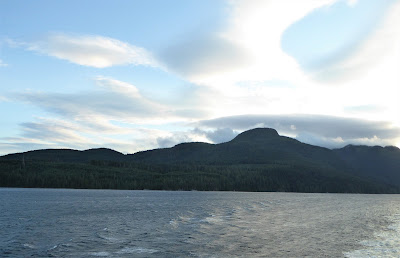 We had a fantastic trip to Alaska. I strongly recommend a land and sea package for anyone thinking about booking a trip. Also, most of the ports we stopped at are small towns. I think the best excursions are on boats or planes to see the magnificence of Alaska. Those trips are quite expensive, though.

We chose not to take our RV. Our main goal was to see the highlights. We definitely think we accomplished that. Most of the RVs we saw were small, but there were some big ones as well. Our fifth wheel is 42 feet, and we just didn't want to deal with finding places to stay that would accommodate that size.

Don’t wish upon a star – Reach for one!
Posted by RV Khronicles of Kevelyn at 11:15 AM No comments: Links to this post