Today we joined the hiking group for a hike known as Telegraph Pass. The day started out cloudy and the tops of the mountains were actually hidden, so we couldn’t see where we were going when we started out.

It took us about two hours to hike about three miles to the top of the mountain ridge. There were two choices once we started climbing. There is a concrete road that is very steep. The road is for workers who service the cell towers up at the top. Most of us chose the second option of a rocky path that had lots of switchbacks to get us to the top. We all chose the road to come back down. It was very steep, but at least there were no lose rocks coming down.

I would call this a strenuous hike because of the elevation. We climbed about 1,150 feet and hiked about five miles round trip in three hours. By the time we got to the top, the sun was shining, and the views were spectacular.

This is the back side and looks into what is known as Dome Valley. You may remember that in mid December we did another hike with the group that went up a different route. We didn’t finish that one because there was no path and we were climbing on loose rocks. If we had finished that hike, we would have gotten to see Dome Valley, so it was nice to be able to finally see it. There are lots of farm fields all around Yuma, and Dome Valley is full of crops. 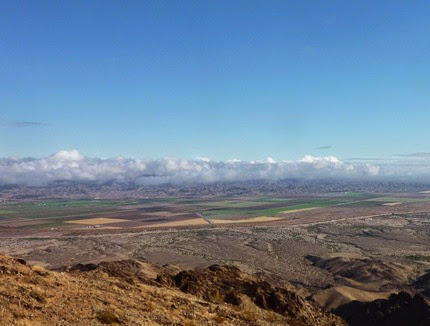 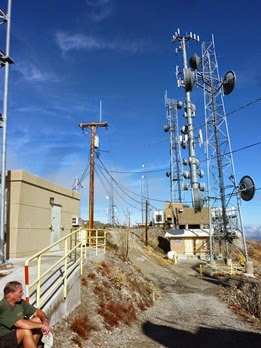 Here are some of the cell towers at the top. Kevin is resting on the side. Those are some big structures up there. 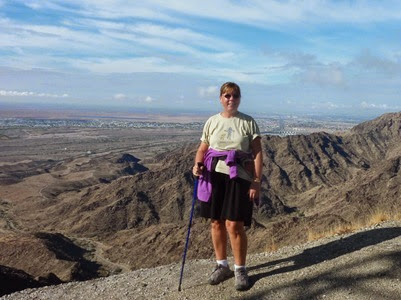 Here’s me on the other side. That is the Yuma foothills down below. The city of Yuma is actually way at the back at the horizon.

We finally got back to the truck feeling proud of our efforts, but also quite tired. Those five towers way up there is where we were. 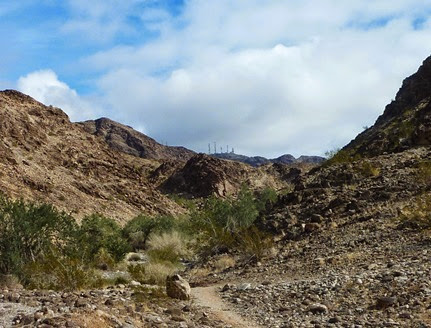 I soaked my sore muscles in the hot tub this afternoon. That sure felt good.

We’ve been at The Palms RV Resort now for almost two weeks. Our opinion is that while it is a very nice park, it is not our cup of tea. All of the lots are for sale in this park. There are about 450 sites, but only 150 have been sold. Some sites have houses built on them, some have RV pads with sheds or casitas and others are just RV pads.

We were walking around one day and a few of the houses were having an open house. We did some investigating and this is what we found out. A basic unimproved lot is $79,900. We saw a nice 1,200 sq. ft. 2 bedroom, 2 bath furnished house that was selling for $289,900. The taxes on that house are about $2,500 a year; taxes on just a lot are around $1,500 a year. HOA fees for everyone are $160 a month. The common areas and pools are very nice, however we don’t see the value here. We’d rather rent and have the option of moving around.

Here’s our site. The site to the right of us is empty, so that is nice. 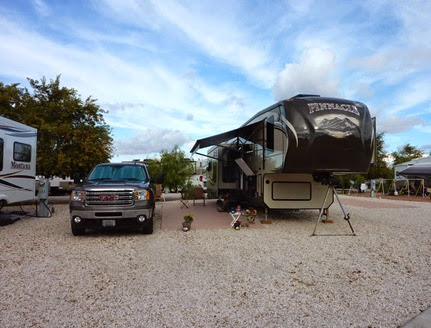 Here are some of the houses that are for sale just down the street from us. 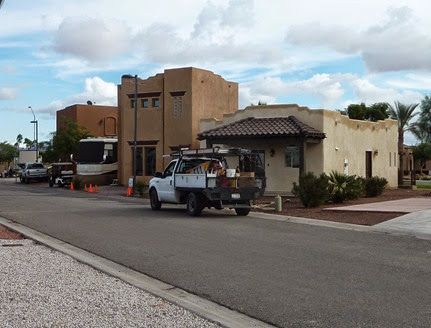 There has been construction going on at these sites since we’ve been here, usually starting early in the morning. Since there are still so many lots not sold, I’m guessing there will be construction noise happening in this park for many years to come. Kevin has not been happy about the early morning noise.

Yesterday our friends Dick and Wanda came over to watch the Green Bay Packers defeat the Dallas Cowboys. That sure made everyone happy. They’re coming again next Sunday to watch the Packers play the Seattle Seahawks in Seattle. That’s going to be a tough game.

We’ve been keeping busy playing pickle-ball and golfing with our friends Bernie and Cathy at Fortuna De Oro. We sure are enjoying the sunshine, although it rained most of the day yesterday. That’s rare, but good for the plants, I guess. Maybe we’ll see some blooming cactus in a while.

Posted by RV Khronicles of Kevelyn at 7:56 PM No comments: