Yesterday we headed to Jackson to tour the Mississippi State Capitol. On the way, we passed the Old Capitol which is now a museum. 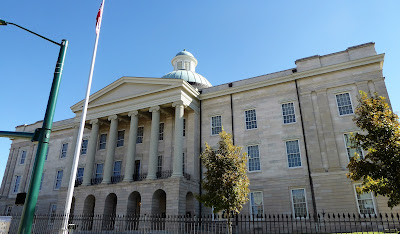 The current Capitol was opened in 1903 at a cost of $1 million. The money came from a lawsuit by the state against the Illinois Central Railroad for back taxes. In 1982 it was restored at a cost of $19 million. It is a beautiful building. 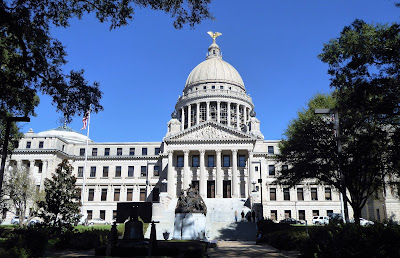 The eagle on the top is 8 feet high and 15 feet wide. It is made of solid copper and covered in three ounces of gold leaf.

Here's a picture of the rotunda from the inside which is 180 feet high. 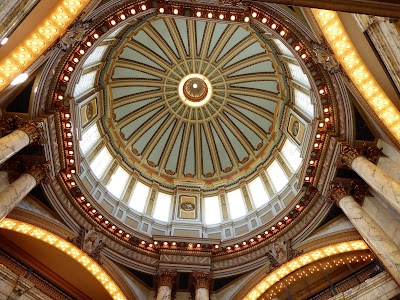 There is quite a bit of marble in the building, but much of what looks like marble is actually man-made art marble called scagliola. Due to many years of smoking inside, the man-made marble is more yellow looking than the real marble.

We joined a tour of the capitol when we got there. We've been to several state capitols, and many of them seem pretty empty and not much is going on. Usually, you are given a sheet of paper for a self-guided tour. The Mississippi Capitol was buzzing with activity. Southern hospitality was evident in everyone we talked to. There were several meetings going on. The Senate and House Chambers were full of high school students participating in a mock government exercise.

The ceilings of the Senate and House Chambers are gorgeous stained glass. This is from the Senate chamber. 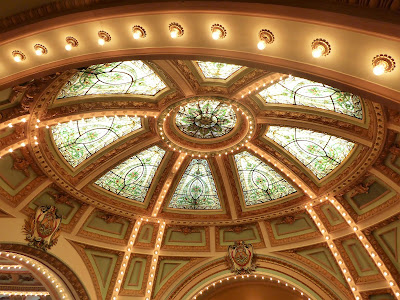 Notice all of the light bulbs? Electricity was pretty new in 1903 and the architect was excited to add lots of electric light. There are 4,750 original light fixtures. Also, notice the colorful palette of the walls. Originally, most of the walls and ceilings were white plaster. In 1934 a major painting program was undertaken, funded by the Civil Works Administration. This was just one of the programs during the depression to put people to work; in this case artists.

In the House chamber hallway there were pictures of all of the house members for each term session. One of those included the author John Grisham. I knew he was an attorney, but didn't realize he had been a politician as well. Our tour guide told us he served from 1984 to 1990, and it is rumored he wrote much of A Time to Kill while in office.

We've been staying at Springridge Mobile Estates and RV Park. The RV portion is an asphalt lot with hookups in the middle of the older mobile home park. Nothing to get excited about, but fine for a few days to explore the area. Our neighbors have a motor home toy hauler. You don't see those too often. Their little smart car fits right inside. 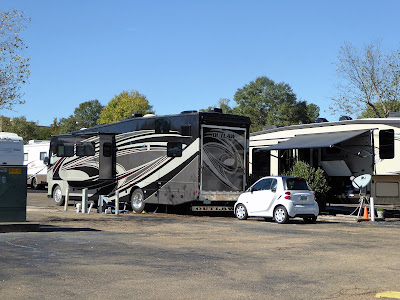 We've been in tourist mode and quite busy for the past month. Today we head to Gulf State Park in Gulf Shores, Alabama where we will be until the end of December. We're looking forward to some relaxing, biking, and beach time.

Don’t wish upon a star – Reach for one!
Posted by RV Khronicles of Kevelyn at 7:14 AM No comments: