Our first island stop was at Hilo on the Big Island of Hawaii. My main goal for this stop was to see Volcanoes National Park. The six of us had prearranged a rental mini-van for this stop through Hertz. The shuttle was at the pier when we got off the ship and the entire rental process was very smooth and quick.

Kevin did the driving. We had our GPS with us, and it worked great. We made our way to the Visitor Center and watched the movie which was very interesting.

Next, we drove along Crater Rim Drive to the viewing area of the main crater called Kilauea Caldera. About half of the loop road was closed due to a recent fissure opening up in the volcano which is emitting dangerous levels of sulphur dioxide. As you can see, there is a lot of gas coming out of the crater. 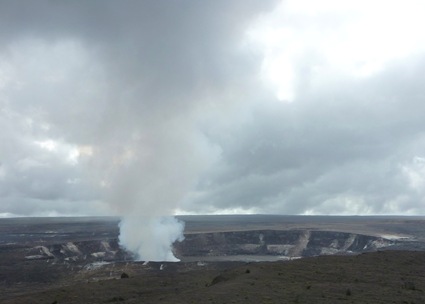 Our next stop was at the Steam Vents Overlook. It’s amazing to me that all of this steam is coming up out of cracks and holes in the mountain, and we were able to walk right through the area without breaking through. You could literally put your hand right up next to a vent and feel how hot the steam was. It was a very surreal experience. 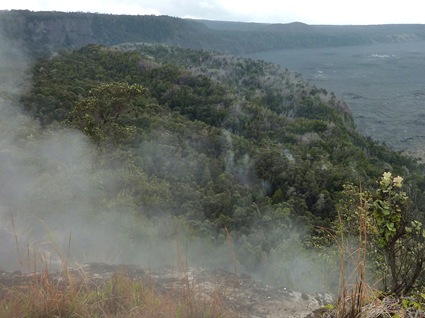 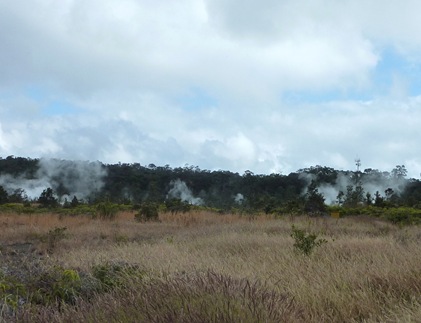 We hiked on a short trail to see the Sulphur Banks. This area reminded me of some areas of Yellowstone National Park. 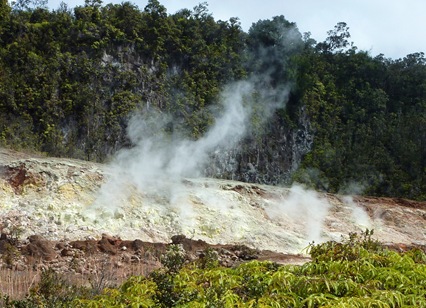 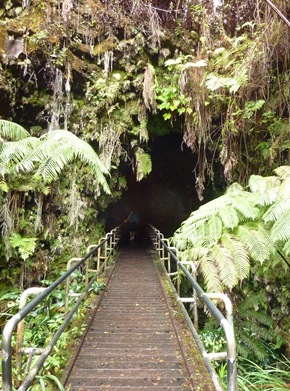 Our final stop in the park was the Thurston Lava Tube. A lava tube is formed when the outer layer of the lava hardens and forms a crust as lava is still flowing through inside. Once the lava inside drains, a tube is created. This particular tube is big enough to drive a bus through!

I was somewhat disappointed that you couldn’t actually see any lava in the park. According to some people I talked to, the lava is still flowing on the other side of the island. The only way to see it is by air or sea. Apparently, some cruise ships sail by at night so passengers can see the glowing lava. Our ship did not do this. 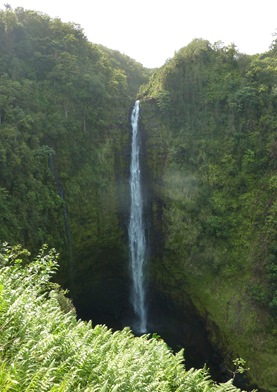 Our next stop was at Akaka Falls State Park. We hiked a short loop trail where we saw a small waterfall and then Akaka Falls. What a gorgeous site with lots of lush vegetation all along the trail.

The next day we toured the island of Maui. I got up early to see if I could spot any whales as we came into port. No luck, but I did witness a beautiful sunrise. As you can see, the picture looks a bit hazy. That’s due to VOG (volcanic fog). The gases from the volcano on the big island is currently causing VOG on all of the other islands. Our tour guide told us that it can be quite a problem for people with respiratory issues. 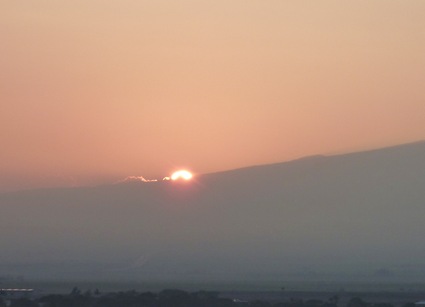 We had booked an excursion for Maui through Roberts Hawaii Tours touring the Road to Hana. The cost was $35 per person less than through the ship’s excursions and was basically the same tour. The nice thing about Roberts is they work with the ship’s itineraries. You tell them the ship you’ll be sailing on, and they guarantee they will have you back on time. We were a little delayed getting off the ship, but they were right there waiting for us. I would highly recommend them.

When Kevin and I were on Maui in 1987, we had a rental car and drove the Hana Road ourselves. This time I wanted Kevin to be able to enjoy the scenery and we wanted to get the narration from a tour driver. Our tour was over 8 hours long, and our driver gave us interesting narration the entire time. The road has 617 turns and 45 bridges with amazing scenery at every turn. 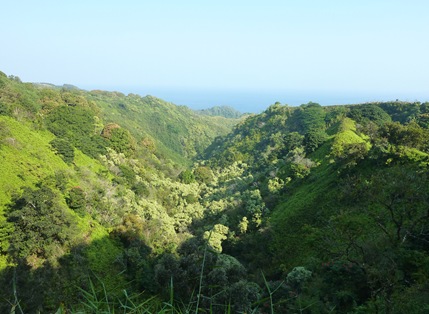 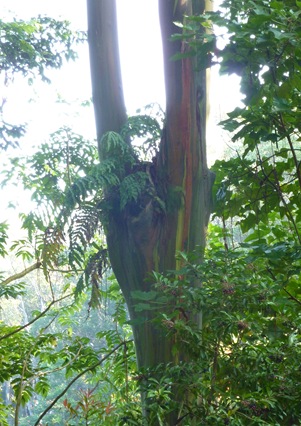 These trees are called Rainbow Eucalyptus and the trunks are naturally multi-colored. So cool!! 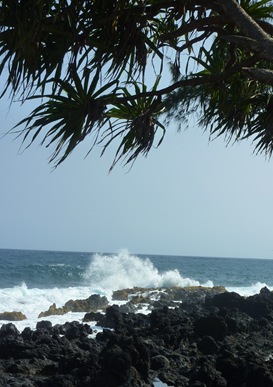 There were some beautiful beaches along the road with black lava rocks.

And, this beach with black sand and some sea caves to explore. 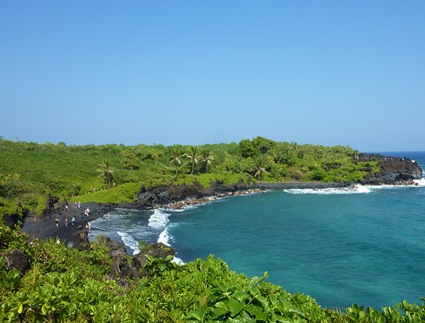 We stopped for a short time at the Kipahulu area of Haleakala National Park. When we were on Maui in 1987, Haleakala National Park included only the summit of the extinct volcano on the island. Since then it has been expanded to include these waterfalls along the ocean. They were formally called The Seven Sacred Pools. Unfortunately, we didn’t stop long enough to walk to the falls. The majority of the people on the bus were more interested in stopping at a wine tasting spot later in the tour, so we only stayed about 15 minutes. I’m often amazed at what people are thinking. There are wine tasting places all over the country, but this is probably the only time they’ll be at this spot. 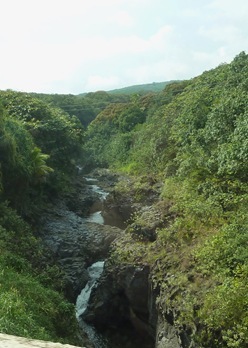 Here’s part of the falls from the bus window. On our trip in 1987, the road ended at these falls. Since that time, it has been opened up to all traffic. Parts of it were unpaved, and it was quite bumpy at times. I’m amazed these mini-buses make this trip every day.

The other side of the island is very different. From lush tropical rain forest we emerged into dry ranch lands. This is the Maui Canyon. It’s hard to believe this is the same island. 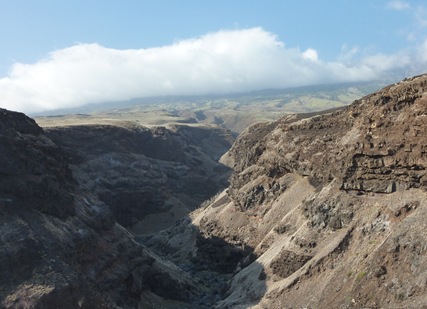 Back on the ship we watched a beautiful sunset as we sailed out of the port. Do you see the outrigger canoe in the harbor (click on picture to enlarge)? Our guide told us that many people enjoy these canoes for exercise. There are clubs that compete throughout all of the Hawaiian Islands. 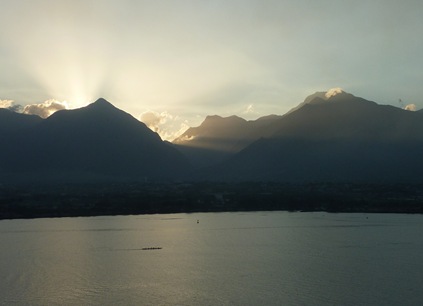 My next post will cover Oahu, Kauai and Kona.

Posted by RV Khronicles of Kevelyn at 3:11 PM 3 comments: Links to this post