Yesterday we took another road trip to two National Monuments within an hour's drive of Billings. Our first stop was the Little Bighorn Battlefield National Monument. We started off by watching a very well done 20 minute video about the battle. At the end, the narrator summarized by saying both sides were fighting for what they believed in at the time, trying to protect their culture and people.

This battle took place on June 25, 1876, just a few days before our country celebrated its centennial. By the next day over 260 soldiers were dead. The park has a unique feature where you call a number on your cell phone, and then dial the different talking points along the way. By listening, we learned a great deal about the battle.

At the time of the battle a village of over 1,000 tepees was set up along the Little Bighorn River in this valley consisting of about 7,000 Lakota, Cheyenne and Arapaho Indians including 1,500 to 2,000 warriors.

The war between the Army and these Indians began because the treaty of 1868 had been broken by the United States. That treaty included the land in the Black Hills in South Dakota. When gold was discovered, thousands of white gold seekers swarmed into the region in violation of the treaty. The Indians left the reservation and resumed raids on settlements and travelers. The Indians were ordered back to the reservation. When they didn't comply, the Army was called in to enforce the order.

After the battle, the soldiers bodies were buried in shallow graves and marked. In 1881 the remains were moved to a mass grave, and a monument was erected with their names engraved on all four sides. Lt. Col. George Armstrong Custer was the commander of the 7th Cavalry. I'm sure you've all heard of the famous Custer's Last Stand. This was the place. 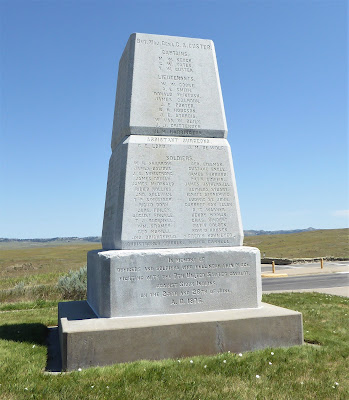 In 1890 the Army erected 249 headstone markers across the battlefield to show where Custer's men had fallen. This is the only National Battlefield that has individual markers for all soldiers lost. It is an eerie feeling looking out over the grassy plains and seeing these markers scattered about. 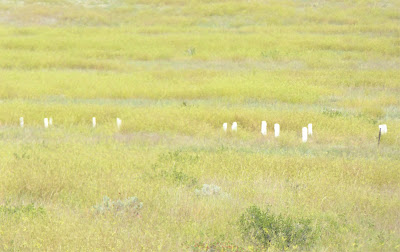 On a hill that has become known as "Last Stand Hill", 210 of these men died with Custer. The markers are very close to each other. It must have been awful!!! 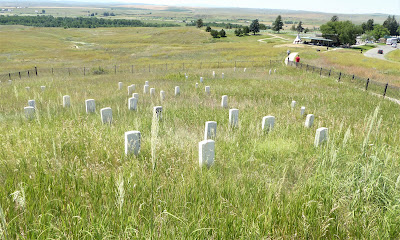 The Indians took their dead warriors away with them. There is no exact count, but in 1999 the National Park Service began erecting red granite markers at known Cheyenne and Lakota warrior casualty sites providing visitors with a balanced perspective of the fierce fighting that occurred. 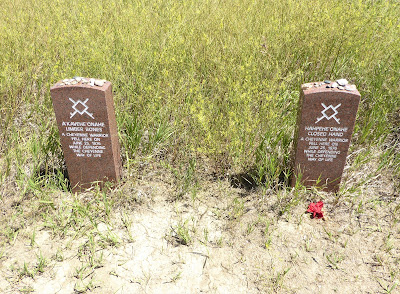 In 2013 an Indian Monument was erected across the road from the Army monument. It is built in a circle which is a sacred symbol. The inside walls display the names and words of those who fought here. I thought this quote by Crazy Horse made a lot of sense. 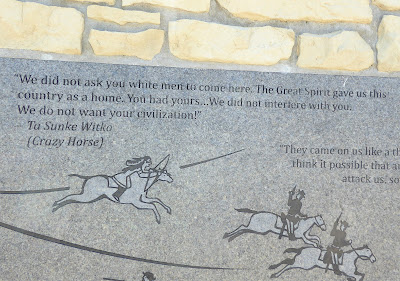 A Spirit Warrior sculpture is also part of the memorial. 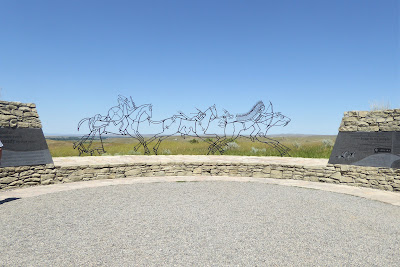 Our second stop was at Pompeys Pillar National Monument. It is the only site along the Lewis and Clark trail where the public can see visible evidence of the expedition. 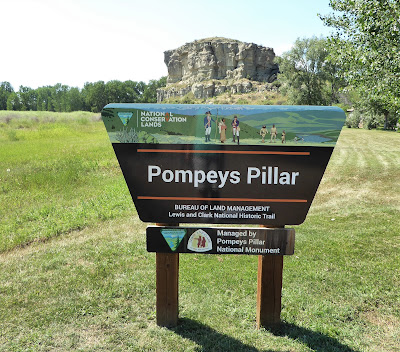 Since we left Seattle, we have been seeing many markers along our route referring to the Lewis and Clark Expedition. On their return journey, they split up for part of the trip. Clark's group stopped along the Yellowstone River near what is now Billings, Montana. At this 150 foot sandstone pillar, William Clark carved his name and the date into the rock on July 25, 1806. Years later when the railroad came through, the carving was covered to preserve it. Thank you railroad!!

Clark named the pillar Pompy's Tower in honor of Sacagawea's son, nicknamed Pomp. It was later changed to Pompeys Pillar. 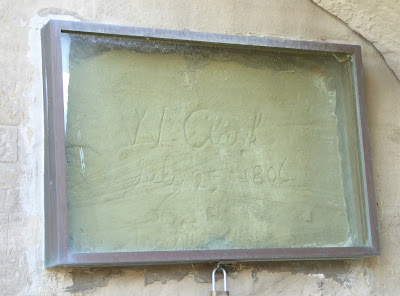 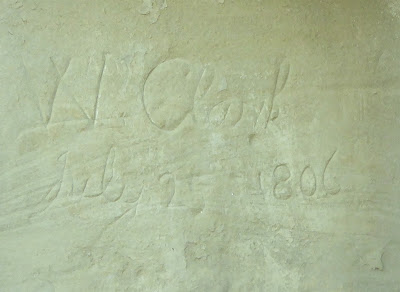 We climbed over 200 steps in 96 degree temperatures to see the carving. Sometimes, it's just worth it. The view from the top was beautiful. Here is the Yellowstone River. 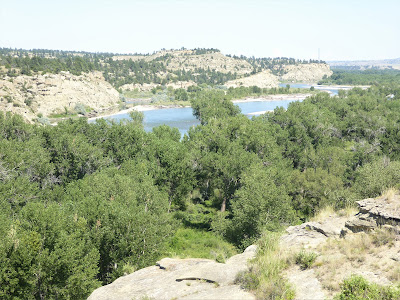 Clark's group carved two canoes out of cottonwood trees while they were here. Up to this point they had been on horseback to cross the Rocky Mountains. These replicas are on display. 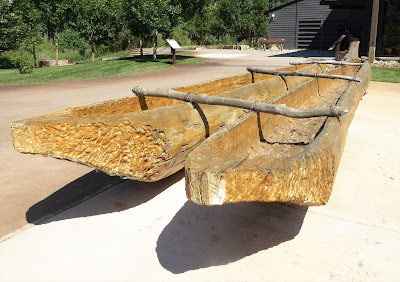 President Jefferson organized the expedition to explore the lands purchased in the Louisiana Purchase. In a two year period, Lewis and Clark covered 8,000 miles from St. Louis to the Pacific Coast and back. They kept detailed journals and maps. Amazing!!!

So, I had conflicted feelings about our visits. In 1806 our country was excited to be exploring this vast country. In 1876 the same country was fighting wars with Indians. I know there are two sides to every story, but this just made me sad.

Today we did a little exploring of downtown Billings. We didn't find much of interest. The Moss Mansion which was built in 1903 for the Moss family who made their fortune in banking, utilities and other ventures. It's a beautiful building which is now a museum. We didn't go inside. 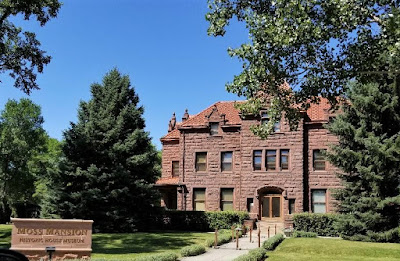 We also visited Thirsty Street Brewery and Montana Brewing Company breweries. I had a huckleberry ice cream cone instead. Much better than beer.

Don’t wish upon a star – Reach for one!
Posted by RV Khronicles of Kevelyn at 7:00 PM 2 comments: Links to this post