On Saturday we drove to Capitol Reef.  This area is located on what’s called the Watermark Fold which is a 100 mile wrinkle in the earth’s crust.  It looks just like the sandstone walls were thrust out of the earth.  As you look along the horizon, it looks kind of like large ships lined up. 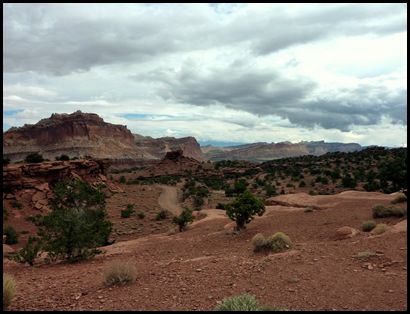 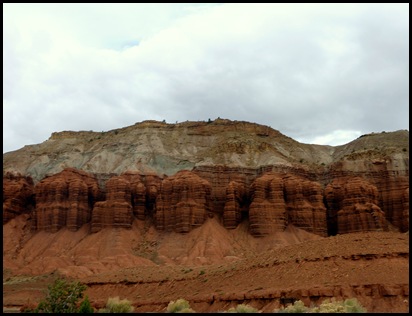 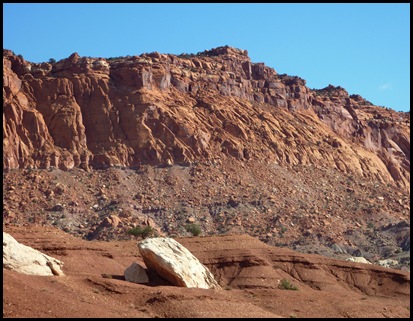 The road travels along the bottom of the cliffs.  There are some dirt roads that branch off the main paved road.  The lady at the visitor’s center told us the dirt roads were safe for cars so we thought we’d have no problem with the truck.

The truck did fine, but I didn’t like bumping along over rocks and through potholes.  This entire state of Utah  is full of off-road trails with Jeeps and ATVs everywhere.  I definitely don’t think it would be my cup of tea.

In the late 1800s the Mormons established a community in the valley and named it Fruita.  They planted fruit trees, many of which are still bearing fruit to this day.  There is a historic home to walk through.  They sure had a nice view, didn’t they. 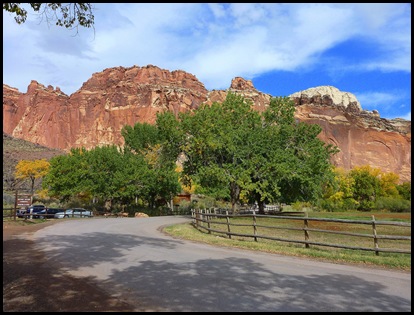 This park was very beautiful, and I loved looking at the scenery as we drove through it.  I think Kevin and I are pretty done with rocks, though.  As he said, after a while they all look the same.  So we only spent a few hours driving through.  The ground was pretty wet, so we didn’t do any hiking.

As we’re been driving all over Utah, I’ve noticed a lot of animals out grazing.  It’s been mostly cattle, but I’ve also seen horses, sheep, llamas and even a bison farm.  When we drove from Colorado to Utah I also saw several Elk reserves.  Hunting must be a big business in both states, as I’ve seen signs welcoming hunters on many of the businesses.

I want to thank those of you that have been leaving me such great comments.  My goal is to keep some balance in my blog.  I try to keep the pictures to a minimum showing you the highlights of the area we’ve visited so your computers don’t take too long downloading them.  I’ve also tried to keep my descriptions brief giving you a general idea of what we’re seeing, but not asking you to read a novel about it.

It’s rather windy and cool today so we’re just chilling out watching football and doing a little laundry.  I’m playing around with Picasa trying to figure out how to do a collage.  If I’m successful, I’ll show you.

Tomorrow we head further south in Utah.  The snow in the mountains is beautiful, but it’s time to find warmer weather.

Posted by RV Khronicles of Kevelyn at 4:13 PM 4 comments: Links to this post