When we left Kansas, we had over three weeks until our reservation in New Orleans on January 17th. One of the places I wanted to stop was Anahauc National Wildlife Refuge to meet fellow blogger Judy who writes the blog Travels With Emma.

So, I booked five nights at Turtle Bayou RV Park near the refuge. It’s a Passport America park and is pretty dumpy. The discounted price is $18 a night. Even that is a bit high in my opinion, definitely not worth more. It is right off of I-10 so there is plenty of road noise. The hook-ups are adequate, and they do have very good free wi-fi.

Judy is currently a volunteer at Anahauc. She spends most of her time as a full time RVer volunteering at various wildlife refuges. We made plans to meet up with her yesterday afternoon for a tour.

Two years ago they built a very nice new visitor center at Anahauc after Hurricane Ike destroyed the previous one. While we waited for Judy to return from her duties at the hunter checkpoint, we watched the two short movies about the refuge. You sit in a retired air boat to watch the movie, and it vibrates and makes engine noises so you feel like you are really riding in a boat. There is even a little breeze blowing in your face. The movies were very informative, and some of the best we’ve seen at visitor centers.

We followed Judy in her truck to the auto tour section of the refuge. From there she hopped into our back seat and gave us a personal tour. Judy definitely knows her stuff. She is affectionately known as the bird lady of blog land. She often helps other bloggers identify birds they have seen in their travels, including several I’ve seen. I’ve learned so much about birds and wildlife refuges from reading her blog. I would encourage you to take a look.

We saw several alligators sunning themselves along the way. 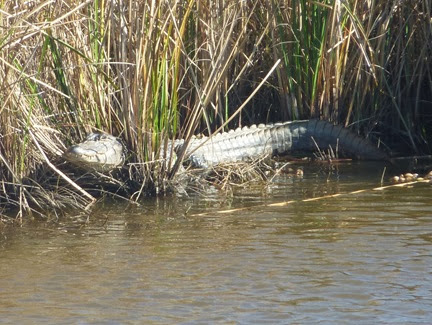 Judy showed us where a mother alligator hangs out with her babies. There were five cars parked at the spot when we arrived. Just as we got there, the mother slid into the water. You can see her big head sticking out of the water below. Judy said there were too many people around. 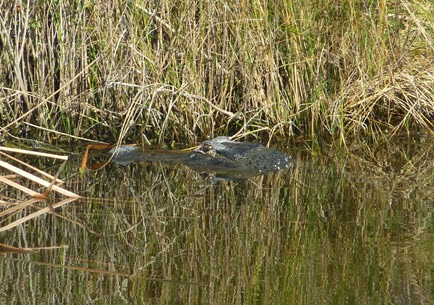 We did see two of the babies in the reeds. That was pretty cool. They look like little dinosaurs to me. 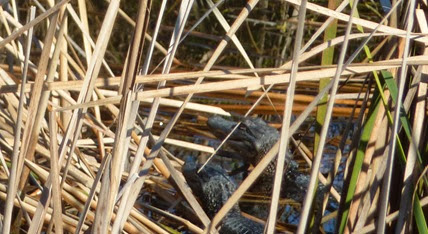 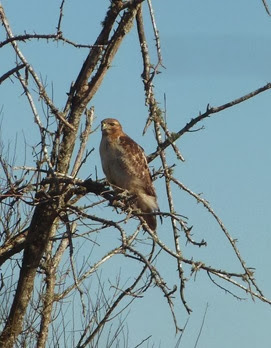 Next we drove to the area that borders Galveston Bay where you can see the Bolivar peninsula. We were now seeing the bay from the opposite side we were on while in Galveston. There were several people fishing and crabbing along the way. We saw lots of coots and different types of ducks on our drive. This Red-tailed Hawk looked very majestic sitting in a tree beside the road.

Our last stop was at the Skillern Tract. A short hike along a path takes you out to an observation platform overlooking a large pond. Judy had been telling us about a couple of Vermillion Flycatchers that have been spotted on the refuge lately. One of them put on quite a show for us at this last stop. It flitted between a couple of the tall trees for quite a while. Unfortunately, I do not have one of those cameras with the gigantic zoom lenses, so I couldn’t get a real good close up, but I think this picture is still pretty good. It was a beautiful bird, and a real treat to see it 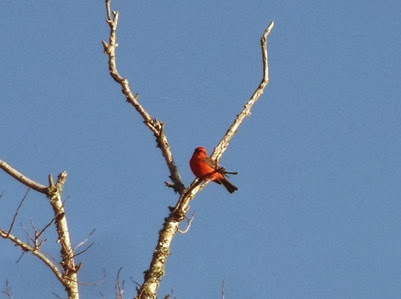 By the way, thanks to reader Contessa who suggested I tap my camera on the counter to see if I could dislodge the dust that was on my lens. It worked, and no more dark spots on my photos!! 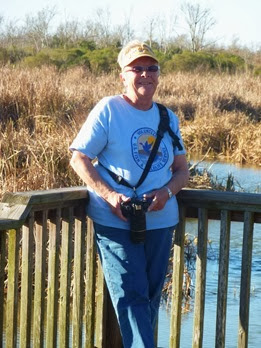 Judy spent about three hours with us. As we slowly drove around the refuge, we shared some details about our lives and she told us some of the history of the refuge. It was great meeting her, and we certainly appreciated the personal tour. What a neat lady!!