Due to the rain we had last week, the powers that be decided to lift the fire ban at our campground for the time being. It may be reinstated if we continue to stay dry.

On Friday Kevin and I gave the campers the good news as they pulled into the park. Many people were very happy, and they were quite willing to keep the fires small. For many people, it just isn’t camping without a campfire. We were back to being busy Friday night selling firewood.

Since we’ve been fulltiming, we don’t have fires all that often anymore. RV parks in the southwest don’t allow campfires. Many campgrounds don’t have fire rings. But, for the weekend campers in Wisconsin, its part of the experience.

All of our sites were full again this weekend. Even with the extreme heat this summer, we have been near capacity almost every weekend. I believe our numbers are definitely up from last year. It seems more people are discovering our peaceful little gem of a campground!

Most of our customers have RVs or pop-ups, but we do get a smattering of tents, especially during the warm summer months. Now that we’ve been here for two years, I’ve noticed a trend. During spring and fall we tend to get mostly fishing people. Then, once school lets out and the weather gets warmer, we get more families and groups of friends. I think the fishing isn’t very good during the warmer months. Once school starts again, we’re back to more fishers and an older clientele. Keeps things interesting.

We had one site with an unusual tent this weekend. This type of tent makes me think of the Civil War. I can’t imagine where you could buy one of them. It looked like it was fairly new. 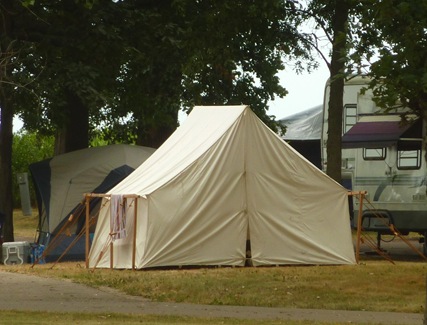 On Saturday afternoon, a sheriff’s car drove into the park and dropped off the young couple staying in that tent. As the car came back around, I stopped him and asked if there was a problem. He said he had found them walking along the road, so stopped to see if they needed help. Apparently, they had been with her mother, had a fight with her, and were walking back to the campground. He gave them a ride.

Every so often we’ll have a sheriff deputy do a drive through. I thanked him for that service. It’s a good deterrent for people to know that there is a police presence in the park. Although, like I’ve said before, this park is so quiet and peaceful. We’ve never had a problem with any of our campers.

Thursday morning Kevin and I went golfing. The forecast was for skies to be overcast in the morning, but there was not rain predicted. We ended up having a light drizzle on the first three holes, but it didn’t stop us from having a very good round. I shot my best round of the season with a score of 57. That’s very good for me! In fact, that may be my best score ever. Kevin also had a great round with a score of 46. I think we may be ready for the tour :)

I only play 9 holes because it has always been just too much effort to play more when I wasn’t very good. If this keeps up, I may be willing to play 18 holes sometimes.

Posted by RV Khronicles of Kevelyn at 9:30 AM 5 comments: Links to this post