The weather this spring has been cold and rainy. Finally, this past week things began to improve. And, we couldn’t have asked for better weather this Memorial Day weekend. It was sunny and in the high 70s each day. Today was actually in the 80s. As I write this post, it is thunder storming outside. That’s a good thing for the garden I planted last week.

Due to the cold spring, flowering of plants was delayed. Lilacs and flowering crabapples usually bloom a few weeks earlier. As you can see from this photo, the crabapples are just in full bloom now. They sure are pretty. 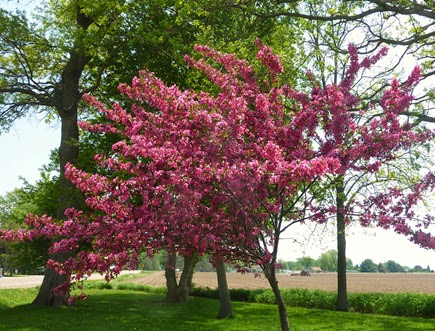 If you look carefully, you can see the tractor in the background. They were planting today; also later than usual. Another latecomer this spring was the lake flies. Normally, they have come and gone by Memorial Day weekend. This year they came out just a few days before the big weekend. They don’t bite, but there are LOTS of them. Keep your mouth closed, or you may be getting some extra protein. Such an annoyance for us humans, but yummy for the birds traveling through!

The last few weeks have been pretty uneventful. I’ve started a new quilting project, planted my garden, took walks and just lived our life. Kevin has been busy with his 24 hour a week job as caretaker of the park and golfing a few times. We did take in a Milwaukee Brewers baseball game with Eric a few weeks ago. We had a great time, and the team won.

All 24 sites in our park were booked for the weekend. There were four groups, and everyone behaved very well. We don’t sell as much firewood when there are groups like that, but that’s okay :)

Two of the sites were occupied by our friends Jim and Wendy and Ralph and Ann. It was so nice to have our friends camping with us. Our son Eric came up Sunday afternoon and stayed overnight. So, lots of good company, great weather, yummy food and delicious beverages. What more can you ask for??

We did have a few odd questions. Two young boys came over with a baby squirrel in their hands. They had found it on the ground, and their parents told them to ask us what to do with it. I told them to put it back where they found it in case the mom squirrel was looking for it.

It amazes me the questions we get. Apparently, we are park rangers, DNR representatives, fishing experts, Chamber of Commerce employees, naturalists, and anything else someone wants to know.

A gentleman who looked to be about in his 60s drove into the park and stopped to talk to us. He will be biking across the state in a few weeks and wanted to know if he could hammock camp for free in the park for a night in some trees in the common area.

I wasn’t sure what to say. I told him to call the park office. I’m guessing anyone who stays overnight in the park has to pay whether they are on a camp site or not.

I asked him what hammock camping was. He explained that it was far more comfortable than sleeping in a tent on the ground and it was covered in case of bad weather. So, I did a little search. Sure enough, there are all kinds of hammocks for camping. Pictures are from the web.

You can get one with a canopy.

Or, you can get one with netting and sleep totally enclosed.

Who knew. In my quick search I found them ranging in price from $150 to $300. If I was biking that far at that age, I think I’d spend that money on a couple of hotel rooms and have some comforts of home. But, that’s me. I’ve never been a fan of roughing it type camping.

So, that’s about it. Not much else to report.

Posted by RV Khronicles of Kevelyn at 2:11 PM 3 comments: Links to this post