We were invited to visit cousin Mark and his family on Wednesday.  They live in Arvada, Colorado which is about 60 miles from Estes Park.

I have a book that I bought several years ago that describes 120 most scenic drives in the US.  One of these was from Estes Park to the Denver area, so we decided to take that drive.  The route is called the Peak to Peak Scenic Drive.  It takes you from Long’s Peak in RMNP to Pike’s Peak.  It was a beautiful drive with mountains, canyons and glowing aspens.  It took us 2.5 hours, but it was worth it.

We made a stop at Camping World and Wal-Mart and then we headed to Red Rock Park and Amphitheater.  It’s an area with huge red rock formations.  In the early 1900s several groups of citizens and politicians had an idea to build an amphitheater between some of these large red rocks because of the excellent acoustic sound.  During the depression, the CCC built this amphitheater without any machines.  They hauled thousands of yards of cement and rock up the hill.

Time and time again I am amazed what the CCC accomplished in the 1930s.  Roosevelt had the right idea when he spent “stimulus money” on forming that group.  No money for Wall Street banks and large corporations.  He put young men to work.  We are still reaping the rewards.

The visitor’s center is perched high on top of the amphitheater.  We climbed 393 steps to the top.  I was sure huffing and puffing.  There was a chart at the visitor center that explained how at that altitude there was 80% less oxygen than at sea level.  Also, because the air is so much drier, it also makes it harder to breathe.  I feel better.  I think of myself as being in pretty decent shape, but I have been running out of breath so easily here.

I forgot my camera and I wasn’t going back down to get it :)  I did have my cell phone and took a few pictures with it.  Unfortunately, I’m having trouble syncing my phone to my laptop so I can’t download the pictures.  I did take a few from the bottom.  This was an incredible place to see.  I’d love to attend a concert here someday.  Acts such as The Beatles, Willie Nelson, The Grateful Dead, Mariah Carey, U2 and many others have performed there. 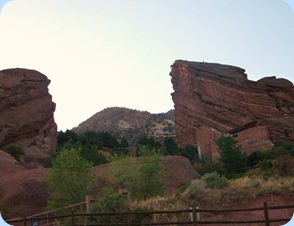 The u-shaped area at the base of the huge rock on the right is the visitor center and amphitheater. The fence in the foreground is at road level.  That’s where the climb begins. 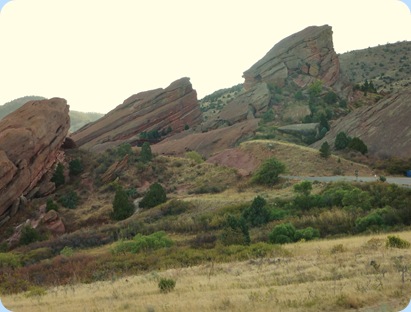 We spent the evening with Mark and Dolly and helped their son, Daniel, celebrate his 21st birthday.  It has been really wonderful spending time with them.  Kevin has fond memories of going to Mark’s families house in St. Louis for Easter each year.  Another bonus of this lifestyle is an opportunity to meet up with distant family and friends.  Thanks Mark and Dolly for your incredible hospitality and to Daniel for letting us share in his special birthday.

We are now driving to Canon City, Colorado to the next 4 days to explore the Royal Gorge area.  We’re traveling on I-25 because Kevin feels it is the safest way to get there.  Many of the state and local highways are in the mountains, and we didn’t want to take any chances.  Driving on the interstate makes me nervous.  I hate that people can switch lanes in front of us.  We again had an idiot today that zipped right in front of us.  Kevin had to hit the brakes hard.

I think all vehicles should come equipped with a paintball gun in the front grill.  When a moron zips in front of you and is driving like an idiot, you should be able to zap him with a paintball.  That way everyone would know who the most dangerous drivers are!