It's been about three weeks since I posted a message. Since we spend six months in one location in the summer, I don't post as often because I don't want to bore all of you. We've been at this same park for seven years, and not that much excitement happens. That's probably a good thing.

I've been asking for new wood chips in our playground for the past few years. We were down to just dirt in there. It's shaded, so often damp. I'm sure kids were getting pretty dirty. Part of the reason it took so long to get them is because the mound system is next to the playground, and it was pretty much impossible to get a big truck in there to dump the wood chips.

This year the powers that be decided the huge truck would dump the chips on one of our least used sites. They brought over a tractor with a bucket on the front. They filled the box on the back of our Gator at the park, and brought buckets over with the tractor. There were five of us from the county working on this project, and we got it done in about five hours. It was forty yards of wood chips. That's a lot!! Thank goodness they brought over the tractor and extra help. If Kevin and I had to move all of them with a wheelbarrow, we would still be at it next year. Just look at that huge pile. 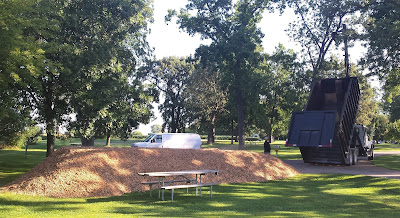 The campground has been very busy again this summer. We were full or nearly full all weekends between mid May and Labor Day. This weekend we only have eight sites in use. It was a beautiful weekend, so I'm a bit surprised by the low turnout. Next weekend is also supposed to be fantastic weather. We'll see how many campers show up.

I must say I'm happy for the slow down. We really have very few problems, but it's so nice and peaceful in the park when there is not much business. Of course, we wouldn't have a job if it was always empty. Darn!

A few weeks ago there was a group here that we recognized. We belonged to a Jayco camping club for over thirty years before becoming full timers. There are a few other Jayco clubs in the state, and the Central Rolling Jaybirds had their August outing at our park. We had met some of them in past years at state rallies. It was fun catching up. 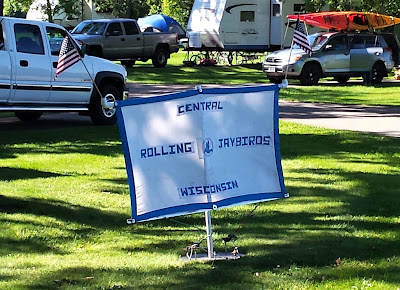 We are going to be homeless for the next two weeks. Our Pinnacle fifth wheel began showing signs of oxidation on the front and back caps last fall. I contacted Jayco, and they said they would pay to have it repainted. The problem was finding someplace to do it in a timely manner. Most of the Jayco dealers I called either wouldn't do it at all or wanted us to bring it in winter and leave it for at least a month. That just wasn't going to work for us at all. 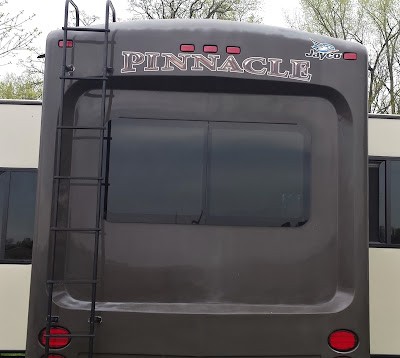 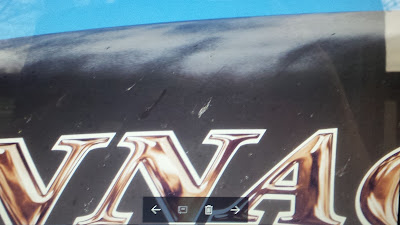 After much research, I found Budget Truck and Auto Repair in Janesville, about 1-1/2 hours from here. They specialize in truck, auto and camper accident repair and painting. We knew two people who had work done there and were very satisfied. It took some doing to get Jayco to allow us to get the work done at a non Jayco dealer, but I convinced them that the dealers just wouldn't work with us.
So, today we are packing it up and dropping it off at the repair facility.

While it's there, we are having all four tires replaced as well. We've had our current China bombs for two years, and don't trust them for another trip to Arizona. We are getting the new Goodyear Endurance tires. They are supposed to be much better for fifth wheels. We'll see how they do.

We have become friends over the past few years with a couple that own a lake home across the road from the park. They have very generously offered to let us stay at their home while our fifth wheel is getting repainted. They are going to be on vacation, so weren't planning to come to the lake during this time. Thanks so much Tim and Pam. They certainly are making it easier for us to be homeless. We will be able to walk across the road to the park to do our jobs.

I'll post pictures of our newly painted front and back caps when we get our fifth wheel back in a few weeks. Hopefully, it will look much better.

Don’t wish upon a star – Reach for one!
Posted by RV Khronicles of Kevelyn at 7:13 AM 5 comments: Links to this post