On Thursday we headed about 40 miles to Avery Island to tour the Tabasco factory with our friends Kim and Harland. The tour is free, but there is a $1 per car charge to enter the island.

In 1868 Edmund McIlhenny started producing Tabasco pepper sauce from capsicum peppers he was growing on Avery Island, his families home. Five generations later the same family is still operating the factory using the same recipe. The factory itself has been rebuilt a couple of times. The present factory was completed in 1980. 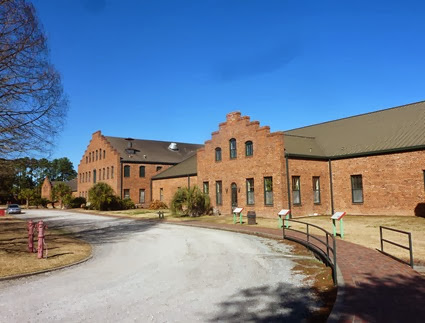 There are now several varieties of pepper sauce sold in over 165 countries and labeled in 22 languages. The day we visited, they were bottling sauce to be shipped to Germany. 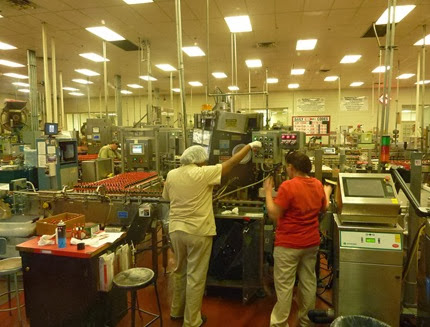 The capsicum peppers are still grown on Avery Island. Those peppers are used for seeds which are shipped to growers in Central and South America to produce enough peppers to produce and bottle all of the sauces.

Once the peppers are processed, they are placed in oak barrels which have a few holes in the cover. Then a layer of salt is placed on top of the barrel. The pepper sauce in these barrels ferments for three years before it is mixed with the remaining ingredients and bottled. I had no idea it took that long.

The salt comes from under Avery Island. The island is on the largest of five salt domes in Louisiana. The salt goes down as far as Mount Everest is high. That’s a lot of salt. The salt mines are leased to the Cargill Salt Company. Annual production tops 2.5 million tons, and the extracted salt is 98.9% pure.

We were each given four small sample bottles of different types of pepper sauces including the original, buffalo, green pepper and chipotle. There was also a free tasting area where you could try all of their sauces, chili with their chili sauce, jalapeno flavored ice cream, pepper flavored soda, and some pepper jellies. I’m not a big fan of spicy hot stuff, but I did like their new sweet and spicy pepper sauce. We bought a bottle of that, a bottle of mild bloody mary mix and a bottle of garlic pepper sauce which Kevin liked and is going to use for marinating. The tour was fun, and we all enjoyed our visit.

On our way back home we saw this camper. They put anything on stilts around here. Interesting!! On Friday we headed to New Orleans. We are staying at Jude Travel Park. We’re staying for a month and wanted someplace where we could leave the fifth wheel while we were on the cruise. This is a family owned small RV park with a fence and security gate. The owners live on site and will be personally watching our truck and fifth wheel. It’s a no frills place, not in the best part of town and the sites are tight; but it works for our needs this time.

As we were driving to New Orleans, we crossed the Atchafalaya Basin Bridge. It’s 18.2 miles long and crosses over a couple of lakes, rivers and swamps. It seemed like that bridge would never end. It is the second longest in the US and the fourteenth longest in the world. Then as we got close to New Orleans, we crossed another long bridge over Lake Pontchartrain. There sure is a lot of water in Louisiana.

Today we did some grocery shopping. There are definitely some different types of food here than we are used to seeing. As Mardi Gras is just around the corner, the stores are all selling King cakes. It looks like a big cinnamon roll with colored frosting. I would have like to buy a small piece to try, but all of the ones we saw were too big for us. 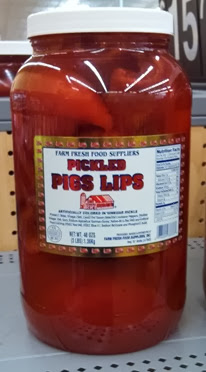 This bottle of pickled pigs lips definitely caught my attention. Who eats this stuff??? On Monday we’re going on a guided walking tour of the French Quarter. I bought the tour on Groupon a couple of weeks ago. I also bought a swamp tour on Groupon which we will do after the cruise. Our boys arrive on Friday, and on Sunday we start cruising. We’ll have a busy couple of weeks. I sure am looking forward to seeing my kids!!