As They Say “Time Flies”

The five days our boys were here flew by.  We had a great visit, but I think they were ready to go home.  As much as we love our home, it’s cramped in here with four adults.  We’ll see them again at Easter.

We took them to the airport yesterday morning.  They both had uneventful flights and arrived home safe and sound.  After seeing all the airport delays on the news, I think they were lucky.

It was a good thing that we went to Disneyland last week.  They closed admission to the park after just two hours yesterday and the day before due to capacity crowds.  I can’t imagine it being any more crowded; crazy!

After leaving the airport, we had lunch with Merikay and Craig.  Merikay writes a blog titled “Merikay’s Dreams are Written in Smoke”.  They were visiting their daughter in San Diego so we made plans to meet in person.  This is our second face-to-face visit with fellow bloggers.

We had a great time getting to know them.  They both grew up in Wisconsin and are dreaming of fulltime RVing in a year or so.   I was touched when Merikay told me that she printed my blog entry the day we closed on our house as inspiration for selling their house.  We wish them all the best on their quest! 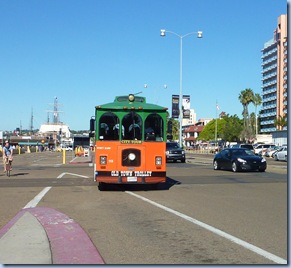 On Monday we spent the day touring San Diego on the Old Town Trolley Tour.

It’s a fully narrated tour.  It takes about 2.5 hours if you stay on for the entire route and just listen.  There are several stops where you can get on and off.  We’ve done these trolley tours in Boston and Washington, DC.  It’s great to hear the history and stories about a city. 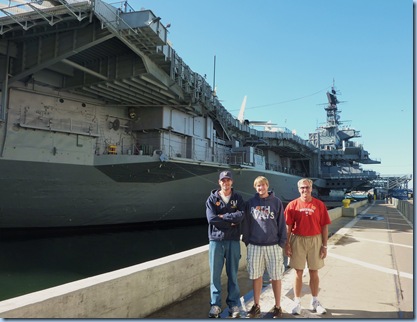 We stopped at the USS Midway which is an aircraft carrier museum.  Included in the admission price is a self-guided audio tour.  If you listen to the entire tour, it takes 3.5 hours.  We were somewhat limited on time, so we spent 1.5 hours checking it out. 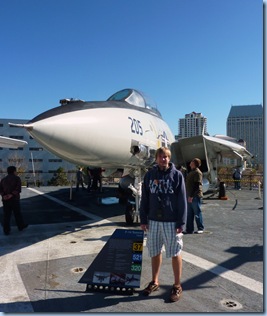 This is the type of aircraft used in the movie Top Gun.

We had no idea how big the museum was and how much there was to see.  It would probably be best to save an entire day to tour the ship. 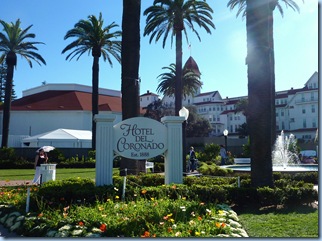 We hopped back onto the trolley and our next stop was The Hotel Del Coronado on Coronado Island.  The island has some of the most expensive real estate in the world.  The hotel has been featured in many movies and TV shows. 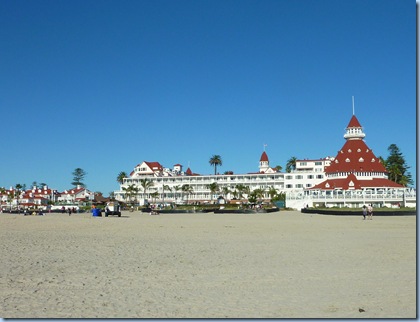 The condos on the left sell for 2.5 million dollars and you can only stay up to 30 days a year.

The bridge to the island is 250 feet tall so that Navy ships can quickly cross under it.  The view of downtown San Diego from the bridge is great.  Because of the proximity of the airport, downtown buildings cannot exceed 500 feet in height. 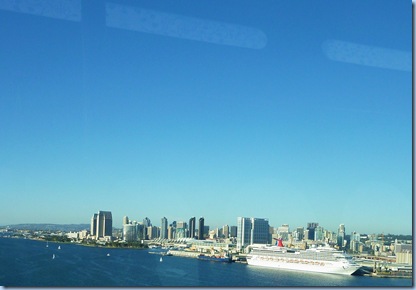 The Carnival cruise ship Splendor is docked for repairs.  You may remember seeing it in the news several weeks ago.  It’s the one that had the fire, and passengers were stuck without power for days as it was towed back to San Diego.

We finished the tour at Old Town State Park in the heart of the city.  This three block area is the original site of San Diego and has many restored historic buildings which house museums and shops.  We wandered around for a while and then ended the day with a Mexican dinner at Cafe Coyote.  Good food and margaritas! 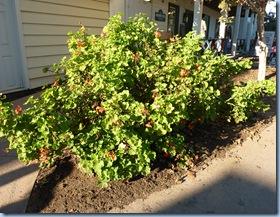 This geranium was growing in the ground outside one of the buildings.  I had no idea geraniums could get this big!

It’s raining again today.  The average annual rainfall is 10 inches.  We’ve had that in less than 2 weeks.  Hopefully, this will be the end of it.  The last 2 days were sunny and in the 60s so I’m not complaining.

Today will be a catch up day.  Some cleaning, laundry, shopping and whatever.  Nothing too exciting.

Posted by RV Khronicles of Kevelyn at 11:26 AM 3 comments: Links to this post