A couple of weeks ago we picked up a Tucson bike route map at one of the Visitor Centers. There are several paved bike trails throughout the city. Yesterday Kevin loaded the bikes on the truck and off we went to ride one on of the trails. 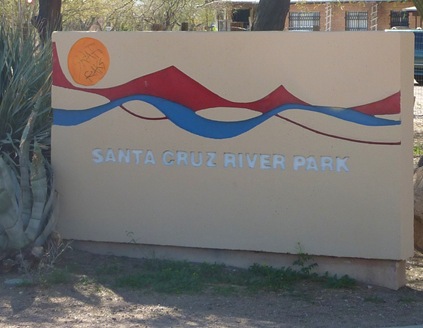 The trail we rode on runs along both sides of the Santa Cruz River as you can see from the above sign. I took a picture of the sign so that you would believe me when I tell you the trail runs along a river. See if you can find the river. Also notice the graffiti in the top left corner. There was graffiti all along the trail. Such a shame. I saw on the news that Tucson has a real problem with graffiti and they’re trying to crack down on it. What’s wrong with people. 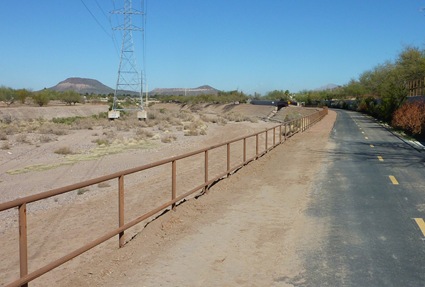 As you can see, the trail is paved and very nice. The mountains in the distance were a pretty site as we rode along. But, the river is dry as bone. I can’t imagine this ever actually having running water in it. In fact, we saw a cowboy riding along the river bed. That’s definitely something you don’t see every day. 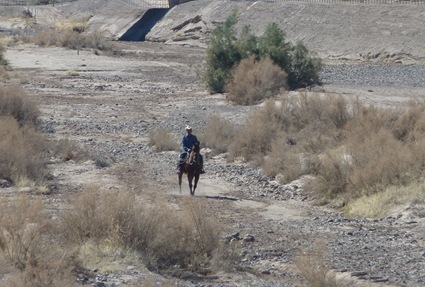 We also saw a couple of roadrunners. This guy ran right in front of Kevin’s bike on the path. I guess he only wanted to show me his back side. 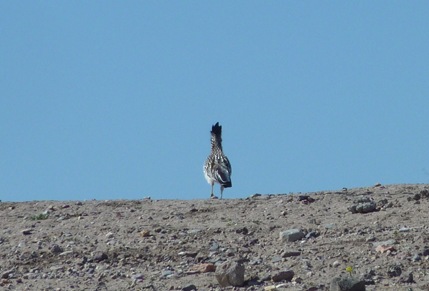 The section of the path we were on is not very long. We rode up and down both sides in a little over an hour. Next week we plan on going to another section of the trail that goes from the city center to the very north end of town. My odometer on my bike is broken so I don’t know how many miles we actually covered.

Yesterday and today were gorgeous days with sunny skies and highs around 80. The weathermen have been going on and on about polar air that is coming in this week. Highs on Tuesday are only supposed to be around 59. Brrr!  :)

Tonight we went to Kevin’s favorite eatery, Texas Roadhouse, for an early Valentine’s dinner. We went early at 4:45 and the place was packed. I guess everyone else had the same idea. We waited about 30 minutes and had a nice dinner with enough leftovers for another meal for both of us.

Both of us cut way down on our eating this week after all that cruise eating. We also tried to eat healthy foods and walked an hour each day. This morning was the weigh-in. Both of us stayed exactly the same. What’s up with that! Why is it so easy to pack on the pounds and so hard to lose even an ounce? One of life’s little inequities. Of well, we’re not giving up.

Remember, when the title of one of my posts has *s around it, it’s a blogsvertise.com ad. Yesterdays post took me about one minute to post, and pays $10. If you see the *s, it’s up to you if you want to read it or not. I’ve been posting ads for them for about a year and earned $200 in that time. I’m not getting rich, but I like it better than the Google ads.