Knee High By The 4th Of July

With the drought and extreme hot temperatures, I’m really surprised the corn in the field behind us is doing so well. Look how tall it is. I’m 5’4” tall, and its as tall as I am. Too bad it’s field corn. No sweet corn suppers for us from this corn. 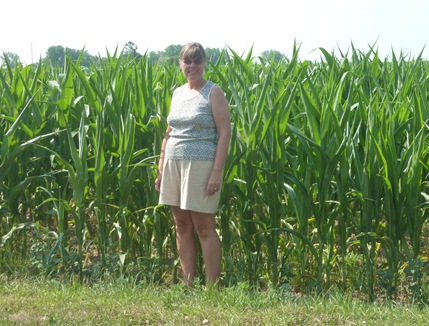 My garden is also doing well. I water it every day to keep it going. We’ve already had several meals from the lettuce. Today I picked my first beans, and the cherry tomatoes should be ripening pretty soon. The tomatoes are taking over. The beans are behind the tomato plants, there are cucumbers on the far side and pepper plants in front of the tomatoes. 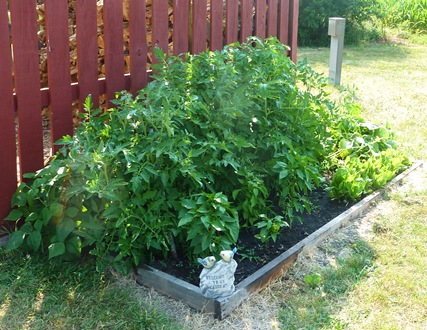 I read on Pinterest that peppers need magnesium. They suggested spraying them with an Epsom salt and water solution. I did it once and the peppers seem to be growing better. I did a second application today. We’ll see how it goes.

I hope everyone had a happy 4th of July. Ours was very quiet. It was actually rather strange. Since the 4th was on a Wednesday, we have had people coming and going all week. Due to the heat, we’ve had a few cancellations. On the 4th we had only 8 sites occupied. They were all RVs with air. The high was 102*. I went outside a few times and there was no one around. Everyone was inside their RV. Even the boat launch was eerily empty. Apparently, it was too hot even to go out on the lake.

Yesterday the high was a record breaking 104*. We spent the day with a group of friends that were camping together at Fountain Lake RV Park near Waupaca. This group of friends has been camping together over the 4th for many years. We used to camp with them, but due to our hosting duties, we aren’t able to camp. Instead we’ve visited for a day last year and this year.

Their park has a club house with an air conditioned library room. We spent all day inside playing games and visiting. We even ate dinner in there. It was just too hot to be outside. It was great to see everyone, and we had a good time. Kevin even managed to win a few bucks playing cards. One of the couples, John and Carol, celebrated their 54th wedding anniversary yesterday. John made an amazingly delicious cheesecake for desert. Congratulations John and Carol, and we’re wishing you many more happy years together.

Today’s high is predicted to be 102* with dew points in the 70s. Sunday this heat wave is finally supposed to break with highs only in the 80s. Who would have thought that 80s would sound cool :)

Although the temperatures are supposed to drop to more tolerable levels, there is still no rain in the ten day forecast. I have a feeling the burn ban will continue for some time. One advantage of the burn ban, is it’s easier for us to be gone from the park. Since we don’t have to be selling fire wood, its not as big a deal if we’re gone in the evening.

So, yesterday we were able to stay for dinner with our friends. Tonight we’re going to fish fry with some of Kevin’s former co-workers. Next Saturday we’re going to a birthday party. I guess every cloud has a silver lining :)