First, I'd like to wish everyone a Happy 4th of July weekend. The park was fully booked, but we had two last minute cancellations. I always feel bad for all the people who wanted to make a reservation but couldn't because we were totally booked, only to have sites sit empty on such a busy holiday weekend because people cancel last minute. 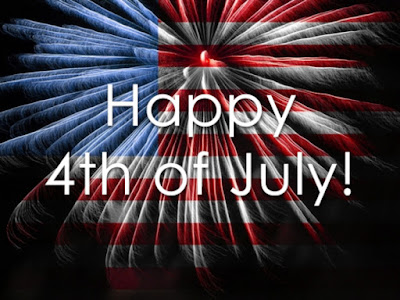 Last Thursday I was headed to Eric's house at 6:45 am to let the DirecTV technician in for some upgrades to Eric's equipment. When the appointment was made, I was told it would be between noon and 4 pm as its over an hour drive for me to get to his house. The night before, they sent Eric a text saying it would be 8 am to noon. I tried to get it changed to the afternoon as was promised, but no luck. That's why I was on the road so early in the morning.

A few miles from the park, a deer came flying out of the ditch and smashed right into the passenger side of my car. I never saw it until it was right next to me, and then I just saw it out of the corner of my eye. I pulled over and didn't see the deer anywhere. It left a huge dent in the front quarter panel of the car, knocked the mirror off and broke the front headlight. Stupid deer.

We bought this car new in 2000. It has 218,000 miles on it, and has been a fantastic car for us. It makes me mad that a stupid deer damaged it. Kevin has a friend coming to visit next weekend who is an auto technician. He's bringing a special hammer to bang out the fender so it won't rub on the tire. At least we'll be able to continue to drive it, just not at night with the broken headlight. We haven't insured it for collision for the last few years because it doesn't have much blue book value anymore. At least we have the truck to drive at night. We store the car during the winter, and only use it in the summer while working at the park. 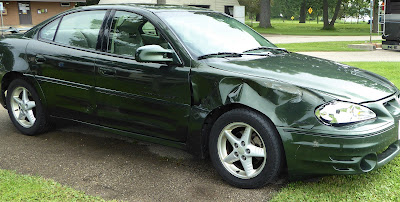 The fender was rubbing on the tire, so I limped the car back to the park, switched my stuff to the truck and hightailed it to Eric's. He was able to wait for me and be a bit late for work. Of course, as luck would have it, the technician was there right at 8 am. They're never on time unless you're running late. At least the new equipment got installed, and everything was working great.

We had also scheduled a new internet connection through AT&T which is now the parent company of DirecTV. Eric has internet through Time Warner, and when they merged with Charter to become Spectrum, they raised his rates $20 a month. The internet guy showed up as was scheduled, but said there was no signal coming to the house and something down the line had to be fixed. That appointment has to be rescheduled. Overall, not a very good day.

Last weekend we had somewhat of a celebrity in the park, although I didn't really know anything about it. For the last few years a group of people have camped at the park the 3rd weekend in June to attend the World of Outlaws race at the Beaver Dam Speedway. I thought it was just some local racing, not any big deal. I knew one of the drivers stayed here, but didn't think much of it.

I found out this year that's it's actually a pretty big deal with driver, Shane Stewart, being sponsored by Larson Marks racing. It's a sprint car and Stewart won the race last Saturday in Beaver Dam and he also won the night before in Iowa. The picture is from the web. Shane travels with his wife and daughter in a motorhome. 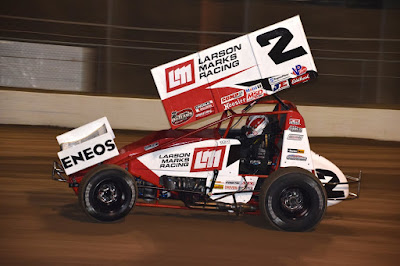 Posted by RV Khronicles of Kevelyn at 7:54 AM No comments: