Yesterday we decided to run some errands before we leave for Nevada tomorrow.  We think we are going to be rather isolated at our next location so we stocked up on food and supplies in case we’re far away from shopping.

As we pulled out of the campground, we had to stop because the road was full of sheep.  That’s a new one!  It appears sheep dogs and horses have been replaced by trucks and ATVs.  There were two pick-up trucks and one ATV herding about 100 sheep down the main road.  I’m not sure where they came from, but they were being herded down the road and turned onto a side street.  A few were straggling, but as soon as the ATV came up behind them, they got right back to the group.  Too funny!!  I didn’t have my camera so I had to use my cell phone camera.  This is the best picture I could get. 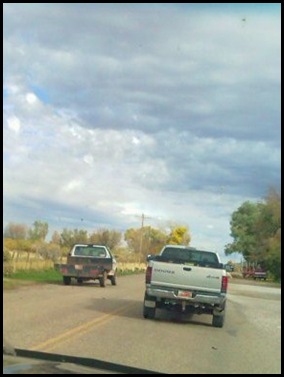 Today is football watching day.  Kevin’s Packers won so he’s one happy camper.  I can’t just sit and watch football so I did laundry, washed the windows on the outside and have been messing around on the computer.  Supper is cooking in the crock pot, so what more could we ask for :)

Tomorrow marks the six month anniversary of our full time RV life.  So far, so great!!

Now that we have six months under our belt, I have a few observations.  Financially, I think we’ve been doing a good job of being frugal but still enjoying the things that we want to.  Kind of the same as we have always lived.  I do think it will cost a bit more than I had expected.

There really is very little I miss from our old life.  I miss seeing family, but we talk often, and the boys are coming for Christmas in less than two months.  I also miss having a dishwasher.  It’s really the only convenience I wish I still had.  I know they now have them for RVs and maybe someday I’ll have one again.

So those are my great words of wisdom after six months :)

The weather is gorgeous today, around 70 degrees and sunny.  I hope everyone is having as great a weekend as we are!

Posted by RV Khronicles of Kevelyn at 5:09 PM 3 comments: Links to this post