Welcome new followers Randy and Pam!  Also, thanks for the many birthday wishes and the comments regarding my magic mushroom post.  You made me laugh!!  I was in grade school in the 60s so am not familiar with those types of mushrooms :)

Last week, we had two wonderful days of visiting with our son, Korey, and his girlfriend, Cathryn.  On Thursday the four of us played 9 holes of golf.  Cathryn has just started playing this year, and she did great.  The rest of us didn’t have the best of rounds.  I blame it on the heat and humidity.

That night we had dinner at my mom’s house with the rest of the family.  It was a great day.  I haven’t had my boys together since April.  A mom can’t ask for much more :)

On Friday we headed to Lakeview Campground in Chilton, Wisconsin to camp with our camping club.  The campground is near Lake Winnebago and has some very nice views. 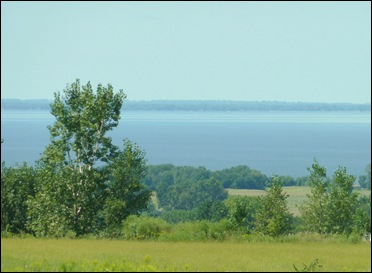 There are two camping sections.  One is in the woods, and the other is wide open.  Many of the sites in the woods would be very difficult to get into, and the roads in there are not very wide.  Our group of 15 units were camped in the wide open area.  This is a new area.  They have planted some trees, so in about ten years it should be a very nice camping area.  For a private campground, the sites were quite spacious. 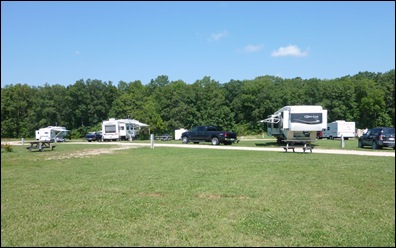 They had 50 amp service with water, but no sewer.  The cost was $31 a night.  We’re the 2nd from the left.  There was a very nice office building with a small restaurant attached.  I heard the fish fry was very good.  There was also a nice pool behind the office. 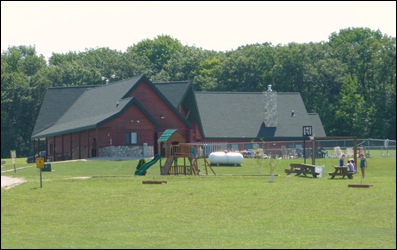 On Friday afternoon, a group of us were sitting around enjoying a cocktail before dinner.  We knew there was a possibility of some thunderstorms, but we weren’t expecting what came next.  There were some dark clouds overhead, no rain, no thunder, no lightening.  Within seconds, the strongest winds I have ever encountered were upon us.  Everything was flying.  Awnings were standing straight up in the air.  We later heard on the news that these were 50 to 70 MPH straight line winds.

Kevin and I ran to our awning.  We have an electric awning so it does not get staked down.  It was literally straight up in the air and possibly over the top of the roof.  It happened so quickly, I’m not sure how far back it went.  Kevin grabbed onto the arm next to the door, and I ran inside and began pushing the button.  We were able to get it rolled up without any damage.  The literature for the awning says it can withstand up to 50 MPH winds.  We now have proof that they are telling the truth!

Next, we ran to our neighbor.  He also had an electric awning.  He was alone, and couldn’t get it rolled up.  He was literally hanging from the middle of it.  He and Kevin grabbed the arms, and I pushed the button.  We also got his rolled up without any damage.  Every camper was able to get their awnings up without damage.  It was truly a miracle.  As we were running around finding the stuff that had blown away; windsocks, flags, tablecloths, etc, the heavy rains came.  We lost power for about four hours.

We were actually very lucky.  There were a number of nearby areas in Wisconsin that had severe damage and flooding, including one tornado.

We did suffer a casualty, however.  Kevin had set up our satellite dish so he could tape the Packer game Friday night.  The wind knocked it over, even though he had 20 pounds of weight attached to the tripod.  Now it doesn’t work.  Luckily, we purchased the extended warranty for it.

Sunday afternoon we headed to Cliffside County Park in Racine, Wisconsin.  We are staying here because it is close to Burlington RV where we have an appointment for warranty service on Wednesday.  This is a very nice county park with water and electric sites.  Some sites are 30 amp and some 50.  The sites have many nice mature trees for shade, but it’s not so shaded that it feels dark all the time.  The cost is $23 a night. 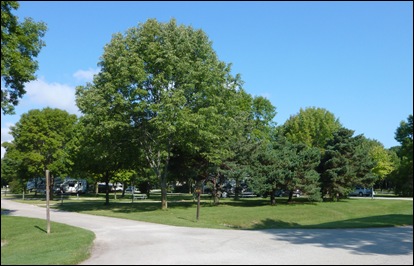 We ran some errands today.  While we were out, we drove along the shore of Lake Michigan for a while.  There sure are some beautiful views.  I forgot my camera so no pictures.

I’ve noticed something that is kind of sad.  Both Milwaukee and Racine have serious problems with crime.  Each city has this beautiful natural resource called Lake Michigan.  As you drive along the lake in both cities, you see huge, expensive homes.  In parts of both cities, just a mile or so inland, the neighborhoods become run down and dangerous.  Crime, drugs, murders are every day occurrences.  These parts of the city are dangerous to drive through to get to the lake.

I’ve lived within 20 miles of Milwaukee and the lake all my life.  We rarely went there because it just didn’t seem like a safe place to go.  What a shame!!!