On Monday we visited Yuma Territorial Prison State Park.  This area has an interesting and diverse history.  The prison was built in 1876 and operated as a prison until 1909 when it was closed due to overcrowding.  It housed a total of 3,069 prisoners including 29 women.

This is part of the main cell block area.  Originally, the hospital was built above these cell blocks. 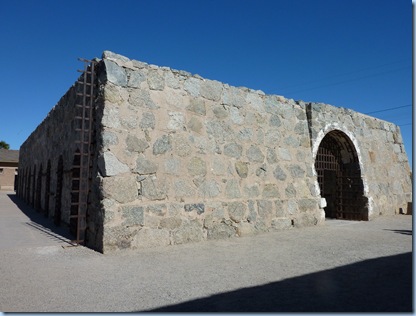 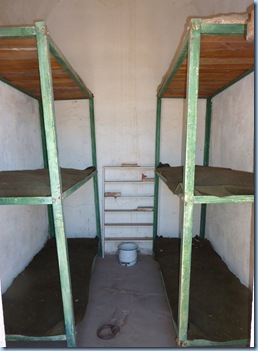 Six prisoners shared each cell.  They slept on two sets of bunk beds.  They shared one small chamber pot.   If one of them caused trouble, all six were chained to the ring in the floor.

The majority of them were between 20 and 30 years old and single.  Most common crimes were burglary, assault, forgery, murder, liquor to Indians, robbery, rape and adultery.  Over 100 prisoners died, mostly from disease or suicide.

Townspeople called the prison the Country Club on the Colorado because the prison had electricity, a ventilation system, flush toilets, a hospital and a library.  Prisoners called it hell.  I guess it’s all a matter of perspective.

During the Great Depression, many homeless people camped out in the exercise yard of the prison.  The entire area is surrounded by a wall and protected from the wind.  The area has been restored, but the wall on the right is original.  These cells were used for the solitary confinement prisoners. 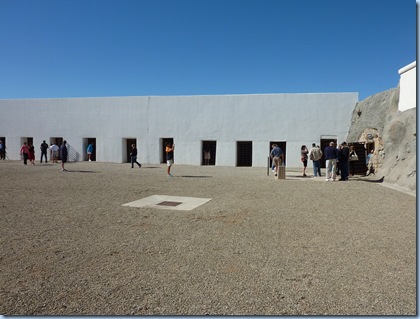 Prisoners were not locked in their cells during the day.  Instead they all had jobs working in places like the rock quarry, kitchen, garden, sewing shop, adobe yard or wood yard.  On Sundays they had time for reading, arts and crafts, education and relaxing.  Prisoners were taught to read and write and many learned a trade.   There was even a prison band. 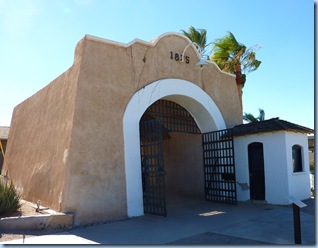 The prison was built along the Colorado River.  The grey bridge is part of the “Ocean to Ocean Highway” and was completed in 1915.  It was the last link connecting the Pacific and Atlantic Ocean.  It is still only a one lane bridge with stop lights on each end.  Across the other side is California.  The black bridge in front is for trains. 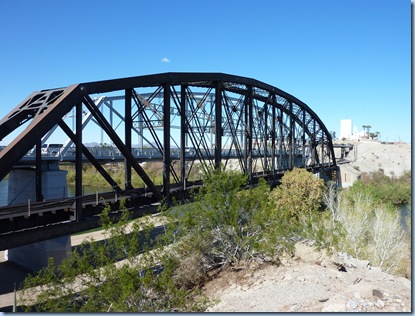 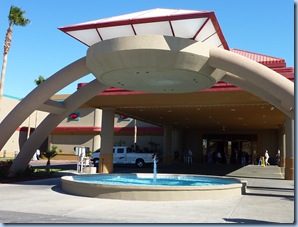 We left the prison and crossed the bridge into California to spend a little more time at The Paradise Casino.  Mondays is 50+ day with $10 in free slot play for anyone over 50.  It was very crowded.  We got our free play and won $12.50 between the two of us.  That covered our $10 admission to the prison.  I think I’m liking this free casino money :)

My thoughts are with our Wisconsin family and friends who are expecting a blizzard today and tomorrow.  Seems like the whole country is experiencing cold or snow.  Our weather is supposed to be cooler for the next few days with highs in the high 50s and lows near freezing.  I know none of you are feeling sorry for us.

Today is our oldest son’s birthday.  So Happy 30th Birthday to Eric.  I remember being in high school and thinking that 30 was really old.  Now I’m the mom of a 30 year old.  Where did the time go?  Eric, we hope you have a great day, snow and all.  We love you and are proud of the man you’ve become!