Canyons of the Ancients National Monument

On Saturday we started our day at the Anasazi Heritage Center.  It is the gateway to Canyons of the Ancients National Monument.  The center is an excellent museum with many interesting displays about Ancestral Puebloen life on the Great Sage Plain.  We walked along the 1/2 mile path to see a view of the McPhee Reservoir. 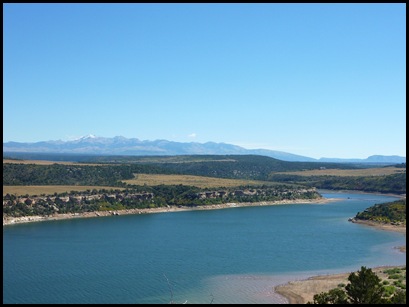 This bush called a Gambel Oak was growing all along the trail.  I never realized oak could grow as a bush.  I’ve only ever seen oak as very large trees.  The leaves had the same shape as those of an oak tree only smaller. 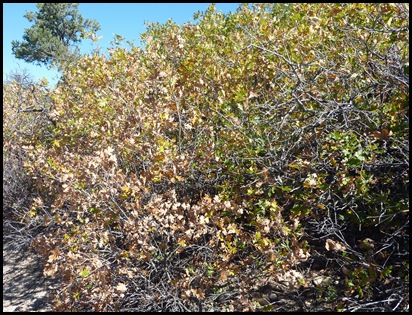 This mountain is called Sleeping Ute Mountain.  Legend has it the mountain is a sleeping warrior god and some day he’ll wake up and help the Ute people again.  His head is on the right, the large hump are his folded arms, further down are his knee and then his foot.  The next picture is the same mountain from the other side.  Now his head is on the left.  For some reason, I’m fascinated with natural wonders that are supposed to be in the shape of something else.  I look for shapes in clouds, too :) 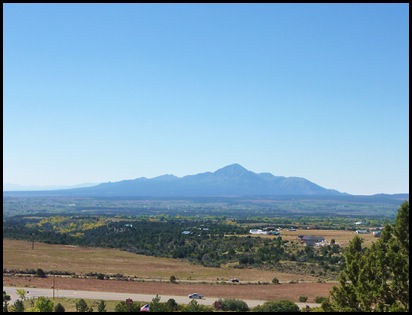 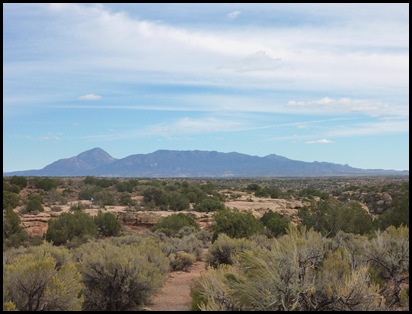 Canyon of the Ancients National Monument was established in 2000 and covers 166,000 acres.  More than 6,000 archaeological sites have been recorded.  This area has the highest known archaeological site density in the nation.  We drove through a good portion of it.  I’ve never seen so much sage and juniper.

We visited Lowry Pueblo which is the only developed site within the monument.  It has been excavated to give visitors a chance to see the 40 rooms at this site.  A roof has been added to help preserve the site.  Otherwise, it looks much as it did when it was excavated. 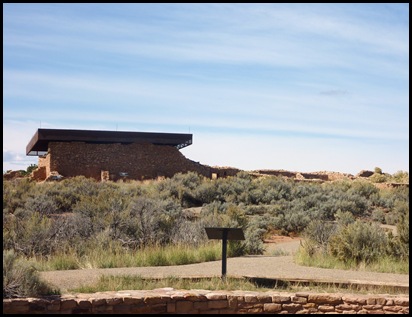 Visitors are allowed to go inside through small doorways.  These people were small.  Average height for men was 5’3” and for women 5’1”. 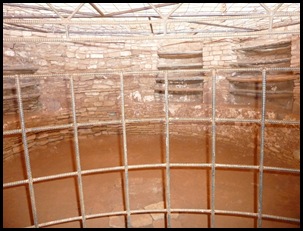 This is a kiva inside the structure.  A kiva was a large room used for ceremonies and group events. 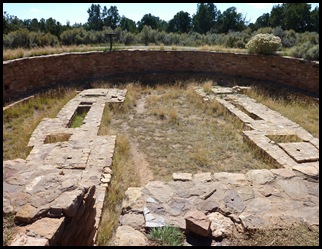 There was also a large kiva.  The stones on the floor represent a winter and summer figure.

Our last stop was the Hovenweep National Monument.  This is a canyon with a number of towers built by the Pueblo people about 700 years ago.  The masonry skills of these people is amazing.  There are a number of different sized towers along this canyon suggesting there was an entire community living here. 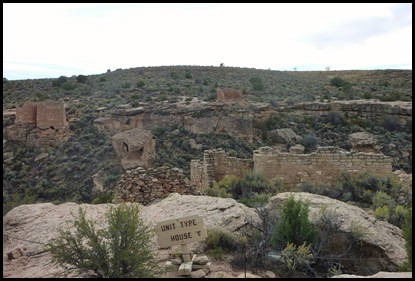 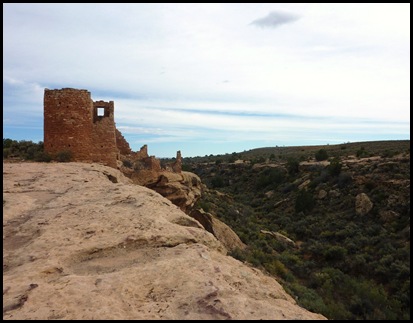 It was another beautiful day with temperatures in the upper 60s.

Posted by RV Khronicles of Kevelyn at 11:07 PM No comments: Links to this post

Yesterday we traveled about 220 miles from south central Colorado to Cortez in the southwestern corner of the state.  It took us about 5 hours.

We had heard on the news that there had been some snow in the mountains on Thursday night, but reports were that it was just an inch or so and that there were no road problems.  We also knew we were going to have to travel through the Wolf Creek Pass at 10,800 feet.  There have been a few other times on this trip that we’ve traveled over or through mountains which made me nervous.  Those were nothing compared to yesterday!

I must say the road was great.  There were many semis, and it was definitely a road designed for large vehicles to use.  It was just so long, and we kept going up and up and up.  The views at the bottom were beautiful with the snow on the top and the aspens still in fall color further down. 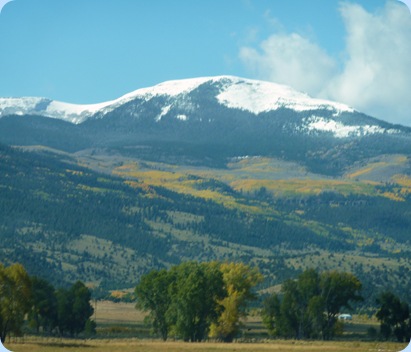 The truck performed like a champ again.  There was another stretch where our top speed was 30 MPH, but most semis were going just as slow.  As we neared the top, we were surrounded by snow.  The road was a bit wet in places, and I was concerned it could be slippery.  I was gripping the door handle so tight, my palms were sweating.  We made it across the top just fine, and then we headed down.  I don’t know which was worse, going up or coming down :) 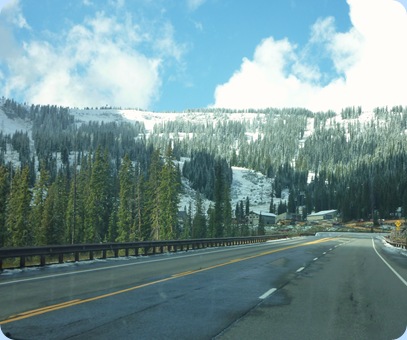 About half way down we stopped at a pullout to let the brakes cool down.  I’m so thankful for Kevin’s driving skills.  There is no way I would attempt that drive.  He’s had enough of the mountains, though.  For the rest of this trip, we’re heading for flatter areas :)

Here’s a picture from the bottom.  Yikes, we just drove over that mountain! 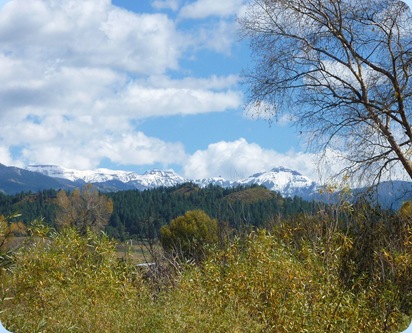 There was a definite change in the terrain as we headed west.  Everything was much greener.  It didn’t seem as desert-like.  There were many ranches with cattle and horses grazing the land.

We’re staying seven nights at the La Mesa RV Resort in Cortez, Colorado.  It’s another Passport America park, and it’s the nicest one we’ve encountered so far.  It’s older and small with only 38 RV sites.  But it’s clean and has full hook-up sites with 30 amp service and is conveniently located to many places we want to visit. We have a picnic table with a vinyl tablecloth and bench covers.  Sometimes, it’s the little things that make a place nice.  Also, the lady in the office was very helpful in pointing out places of interest and telling us how to get to them.  There is no wow factor, but since we’ll be gone most days, it’s a perfect place to stay while touring the area.

We’re paying the weekly rate which is $120 plus $11.30 tax.  We have an end site so are not looking at any other RVs.  They have wi-fi, but it only works near the office.  We have a strong enough signal to use our own internet connection.  The place is also peacefully quiet.   The last place we stayed was right off the highway and there was a train track on the other side of the campground. 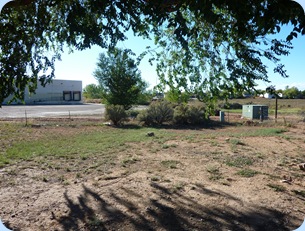 View from our front door. 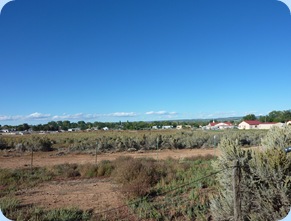 View out of our back window. 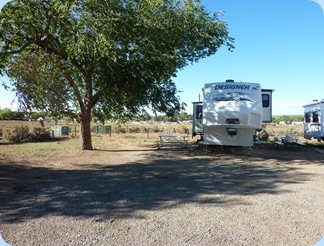 Wishing everyone a great weekend!

Posted by RV Khronicles of Kevelyn at 9:40 AM 5 comments: Links to this post