Sunday morning we decided to take a hike on the Tunnel Drive Trail on the outskirts of Canon City, Colorado.

As an aside, Canon City is pronounced Canyon City.  When the town was established, a newspaper reporter wrote the new name using the Spanish spelling which has that little symbol over the first n (I forget what it’s called).  Most every place I saw it written, it was without the symbol.  Funny how one little mistake can change things forever.

We checked out the trail online, and it was said to be a 2 mile hike with a steep incline at the beginning.  I figured this would be a great time to try out my new hiking pole.  The first hundred yards of the trail were somewhat steep, but not that bad.  Once you got to the top, the rest of it was a nice flat, wide gravel trail right along the side of the cliff.  I liked using the hiking pole on the uphill and downhill part of the trail.  I ended up carrying it on the flat portion because it felt like it was slowing me down.  It’s collapsible so at least it wasn’t a problem carrying it.  I also think I might end up with a blister on my thumb if I used it for a long time.  Now I’ll probably need a hiking glove :) 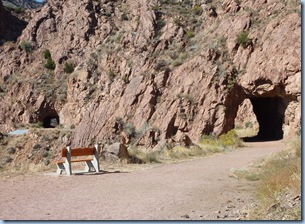 Near the beginning are three tunnels right through the rock.  This picture is of the first two.  The third is a little further down the trail and is the longest one. 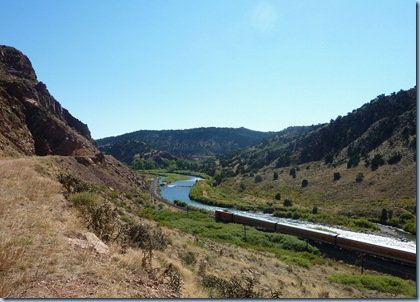 The entire hike was on a cliff along the Arkansas River with some beautiful views.  This train is the Royal Gorge Train which you can ride from the Royal Gorge Bridge to Canon City (about 10 miles). 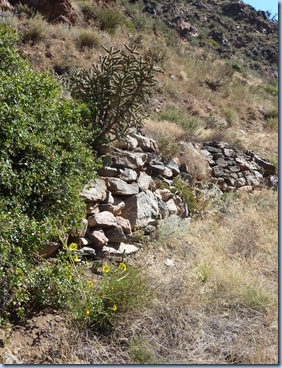 This area of Colorado is considered to be high desert.  They’ve had an unusually warm and dry fall so everything is quite brown and dusty.  Along the trail were quite a few cactus as well as these little sunflowers. 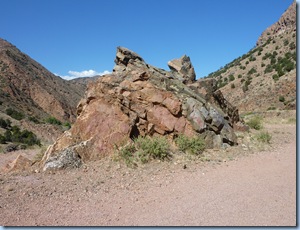 This rock formation looks like a stegosaurus to me.  His head is laying down on the right, then you have his spikes on his back and his tail on the left with a spike.  Either you see it, or you think I’m crazy :)

It took us about 1-1/2 hours to finish the 4 mile hike.  We headed back home to watch the Green Bay Packers win their game and spent the rest of the day relaxing.

Posted by RV Khronicles of Kevelyn at 1:44 PM 3 comments: Links to this post