We’ve had cool and rainy weather two weekends in a row.  I’m sure many of you are crying for me right about now :)  Last night was pretty windy.  It’s been a while since wind has been an issue for me.  But last night it was blowing at the back side of us causing the bedroom slide topper to make noise.  Luckily, once the rains started, the winds died down somewhat.  We had about 1/2 inch of rain overnight.

Today it’s cold!  The high is only supposed to get to 53 degrees.  Brrrr!  Scottsdale even had a dusting of snow.  We just got rain.  Okay, so I’m being a bit sarcastic.  I know our Wisconsin readers would love to see 50 degree temps in February.  I am glad to see that the forecast is calling for high 70s by the end of the week.  Now that’s what I call baseball weather.

The clouds yesterday did help in creating a gorgeous sunrise. 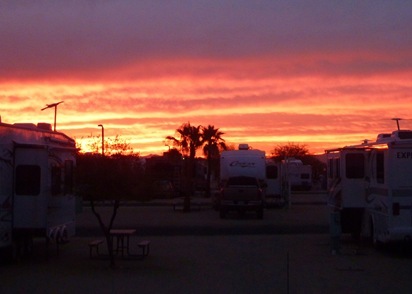 Here’s our site at Leaf Verde RV Resort in Buckeye, Arizona.  This is another typical desert campground.  Basically, a large gravel lot with hookups.  But, that’s how most of them are.  There are some trees between the sites. 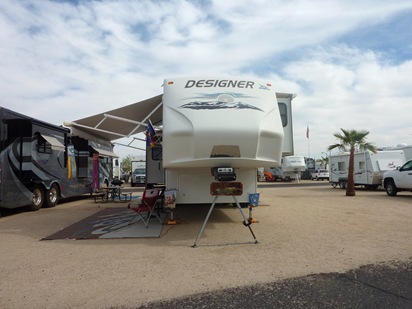 We do like the price at this park.  The cost is $350 a month plus electric.  They only charge 9 cents per KW hour which they said is what the electric company charges them.  That’s almost half of what we were charged for electricity in Yuma.  We have a full hookup site with free wi-fi.  The park has a pool, rec hall, shuffleboard courts, a basketball court and laundry.  They also have some organized activities, but not too many.

This is not a “senior” park so there are families with children.  It’s kind of nice to see kids again.  The sites are closer together than we would consider ideal, but acceptable.  Our main reason for coming to the Phoenix area was to see some Spring Training games.  This park is about 30 minutes from the Brewers facility.

On Friday we drove to Marysvale Park where the Brewers play to buy some tickets.  As we walked up to the entrance, we saw a small crowd of people.  They were waiting for the players to come back to the clubhouse from the practice fields so they could get autographs.  I was quite surprised by the number of older adults seeking autographs.  Many of them had binders with baseball cards in them.  I didn’t recognize any of the players.  Kevin said they were all minor leaguers hoping to make the big league squad this year. 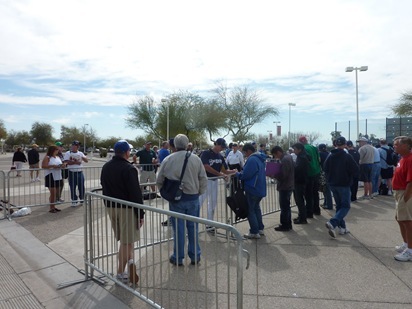 The lady at the top left of the picture was getting her picture taken with any player that would cooperate.  Too funny! 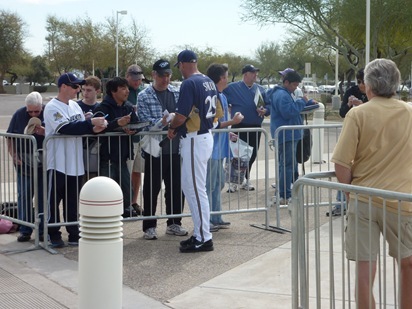 The only player I recognized was Dale Sveum and he’s no longer a player, but a coach.  I guess I’m getting old.  I had thought about getting a job with the Brewers during Spring Training in Arizona and then hopefully working for them in Milwaukee as well.  I made numerous calls to them this winter, but no one ever called me back.  The young man who sold us our tickets gave me the name of the person to talk to.  He said they usually hire a year in advance.  I’ll see if I can talk to him while we’re here.  The same guy hires in Milwaukee, so maybe I’ll get lucky.  I think it would be fun to work at the ballpark.

We bought tickets for Monday’s home opener.  Our friends Paul and Ann from Wisconsin are supposed to be coming to Phoenix for some games.  We look forward to seeing them!

The Nascar race is in Phoenix today.  Kevin enjoys watching the races, so I thought we should try to get tickets.  He didn’t think it was worth spending the money.  It’s probably a good thing since it won’t be very warm today.

We got the movie Red from Redbox yesterday.  It’s about a group of retired CIA operatives who come out of retirement.  It stars Bruce Willis and Morgan Freeman.  We both really enjoyed it.

Posted by RV Khronicles of Kevelyn at 9:57 AM 4 comments: Links to this post