On Monday Korey drove us to Moorhead, MN to show us his new apartment and one of his offices. Korey and his roommate, AJ, moved into the apartment in May and then both left to work at camp for the summer.

It’s a very nice apartment with 2 bedrooms and 2 baths. They are on the top floor with a nice little balcony off the living room. The building is only a few years old. All the rooms are very spacious. They have a 2 car garage which is practically essential in the cold winters. There is also an indoor pool and exercise room. I think they’ll like living there. Now they just need time to unpack and get a little more furniture :)

Monday evening we took Korey and his girlfriend, Cathryn, out to dinner at a restuarant called Granite City to celebrate Korey’s birthday. The restaurant has it’s 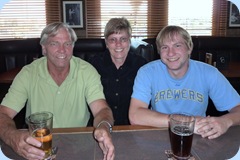 own microbrewery. The guys enjoyed the beers. Here’s a picture at the bar. Cathryn wasn’t there yet when the bartender took the picture for us. Happy Birthday, Korey! I can’t believe my baby is 26 years old!

Both guys ordered the “bedda chedda” burgers. I have never seen such a large burger with so much cheese piled on top. They managed to eat the whole thing and said they were very tasty. I had a french dip type sandwich. It was just OK. Cathryn had the chicken wrap and said it was a bit dry. The guys really liked the restaurant. I wasn’t as impressed.

After dinner we went to Cathryn’s parents house for birthday cake. It was the first time we met them. They are very nice people with a beautiful home. They live a few blocks from the Red River.

You may recall that two summers ago there was terrible flooding along the Red River in Fargo and Moorhead. The water came close to their house, but they were spared from any flooding. Many of their friends and neighbors were not so lucky. There are still houses along the river that are up on blocks waiting to be moved to a different location.

Yesterday Korey drove us to Bemidji to see another of his offices. I also wanted to see the statues of Paul Bunyan and Babe, the blue ox. Here’s Korey with the statues. 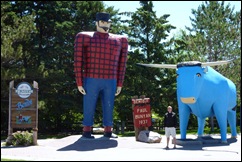 The tourist center next to the statues has a variety of Paul Bunyan memorabilia including his axe, gun, fishing pole and boxer shorts :) ace of States is also located in the tourist center. It is made out of stones from every state in the Union, every province of Canada, and from Mexico and other countries. One of the stones is from the original US Capitol in Washington, DC. You can see Paul Bunyan’s hammer and fishing net in the picture.

We’re now headed to Fountain Lake Campground in Waupaca, WI to visit our friends Dick and Wanda who own a lot at the campground. Each year a group of 10 of us get together for the 4th of July at Fountain Lake. Lots of game playing and eating takes place while we’re there. (Maybe a little drinking, too!) We’ll all have a great time. The weather is forecast to be spectacular!