Happy to be Back in Yuma

I can't believe it's been over three weeks since we've been back in Yuma. Our home weathered the summer well. The new windows we had installed last year made a world of difference in how much dust and sand got into the park model. There was almost no dust on any of the furniture. The windows were definitely money well spent.

A few days after we returned the resort had an Octoberfest potluck party. They provided the brats and beer, and everyone else brought a dish to pass. In early October there aren't that many people back yet, so it was a nice gathering for a potluck. With over 1,200 sites here, there is no way a potluck would work once it gets busy. We enjoyed the food and catching up with friends. 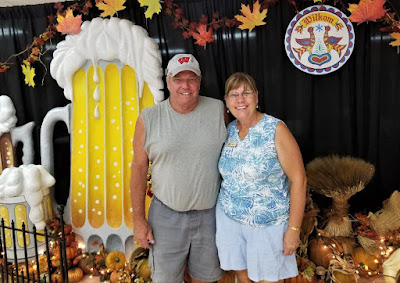 We brought some bins back with us of treasures from our former house that were stored in Eric's basement. In 1982 I went to Germany with my mom and baby Eric to visit my grandparents. We were gone five weeks, so Kevin stayed home and worked. All he asked for was a coo coo clock. After almost ten years in storage, it is now hanging our our wall again. Amazingly, it still works great. 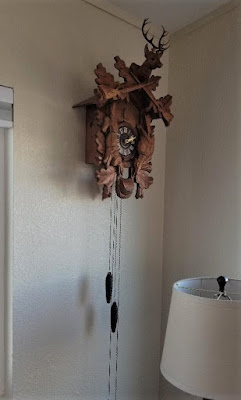 After my dad retired, he took up woodworking. He created many beautiful pieces. We hung a cabinet and shelf he made. The angel on the shelf was part of his casket, so has special meaning. 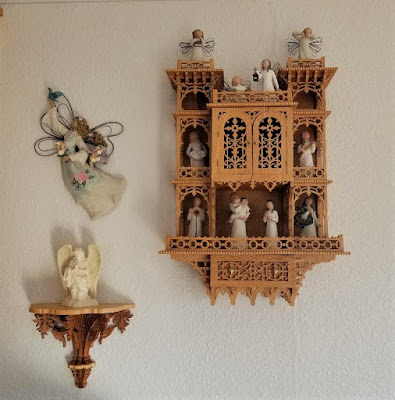 Last March Kevin had a hole in one on the fourth hole at the golf course here at the resort. The management gifted him a large beer mug with his name, the date and hole number engraved on it. On the other side is the name and logo of the resort. That was sure nice of them. He also gets free drinks in his mug for day. That could leave a mark!!! 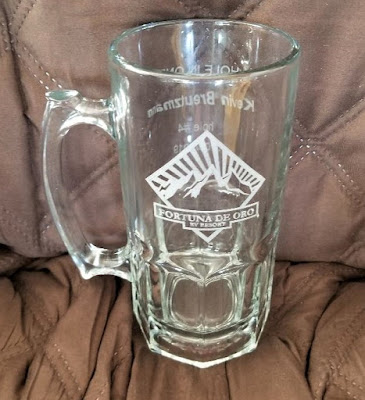 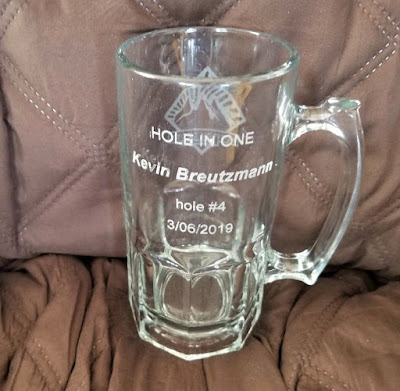 Last Sunday we Skyped with Korey and Cathryn. It was the much anticipated day when the beer they brewed was ready to drink. Korey and Kevin opened a bottle and tasted together. Both said it was flat. Boo!! Korey had brewed some hard cider before, but neither had brewed beer. The recipe they had didn't say anything about adding priming sugar to the bottle when filling. They didn't know they were supposed to do that, so it didn't carbonate like it was supposed to.

I read online that if you place the bottles upside down for at least three days, the remaining yeast will get stirred up and create some carbonation. Kevin did this, and he is going to try it today. Otherwise, he will have 20 bottles of flat beer to drink. The good news is that the taste was good. A little hoppy for Kevin's tastes, but all in all drinkable. A decent outcome for the first try.

They learned a lot, and the next batch will be better. We plan on being back in Lincoln at the end of June next year. They plan to try again.

Since we've been back, the temperature has been pretty much in the 90s. Next week is predicted to cool off with highs in the 70s and 80s. That will be wonderful. We've golfed a few times. I had my best score ever for 9 holes. I finally broke the 50s and had a 49. Of course, we won't talk about the back nine. Much harder.

Our golf leagues start up again this week. The resort has hired a work camper whose job is to give free group golf lessons and clinics. I'm looking forward to learning something that may help my game a bit.

I went to the first woodcarving session. They have a couple of interesting projects planned for this season. I'm still working on finishing one I started last year.

So, we are looking forward to all the fun activities the resort offers each winter season. Plenty to keep us busy and entertained! We also have a few more projects on our park model to complete. Main ones are replacing the flooring on our front porch and repairing and painting the shed.

Don’t wish upon a star – Reach for one!
Posted by RV Khronicles of Kevelyn at 11:02 AM 1 comment: Links to this post