Eric arrived Tuesday evening after an uneventful Southwest flight. Although, the plane was 30 minutes late leaving Milwaukee, they made up the time in the air and arrived on time. Way to go Southwest.

This trip is all about Milwaukee Brewers Spring Training games. On Wednesday we watched the Brewers defeat the 2014 World Series champions San Francisco Giants at the Giants stadium in Scottsdale. Its interesting how the prices vary at different ball parks. The Giants charge $16.50 for lawn seating. Most other teams charge $8 for lawn seating. 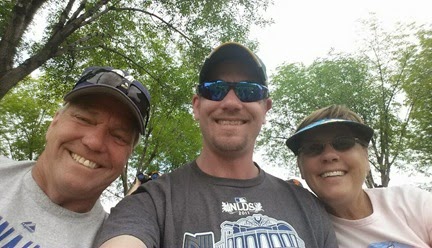 On Thursday we watched the Brewers defeat the Colorado Rockies in Maryvale, the Brewers home park. We really enjoy going to our home park. It’s a nice atmosphere, and there are several spots to sit in the shade. Some of the parks have no shade unless you buy the more expensive tickets. 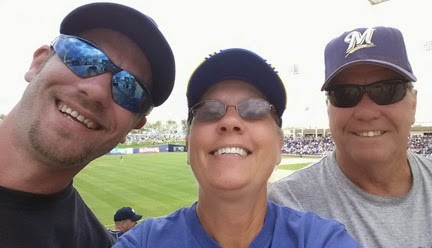 There were some celebrities at the game. The Ninja Turtles were lined up watching the game. 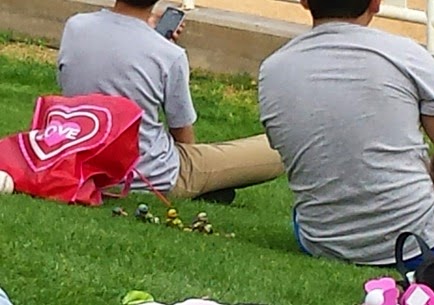 Today we’re going to Peoria to watch the Brewers play the Seattle Mariners at their home park. Hopefully, the Brewers can continue their winning streak, and we can find some shade. It’s supposed to be near 90 the next several days. Even though its dry heat, that sun is hot!!

Yesterday morning we taught Eric how to play pickle ball. Kevin, Eric, Janie and John played together, while I encouraged them from the sideline. I’m still not able to play, but my ankle is definitely getting better.

Janie and John are also beginner players. I think everyone caught on quickly and got better as they played. It’s a nice way to have some fun and work up a sweat. I can’t wait until my ankle is better, and I can play again.

While we were at pickle ball, we heard a loud bang. We looked over to the exit road, and saw what had caused the noise. A fifth wheel going over the speed bump came off the hitch and fell onto the back of the truck. Several of the RV park employees quickly went over to help, and they got it back on its way pretty quickly. You always hate to see these kind of accidents. 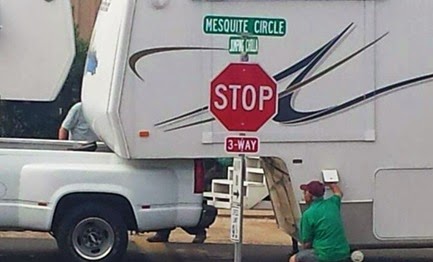