Yesterday we drove to Gateway Park in downtown Yuma to ride our bikes on the Yuma Crossing Bike Trail. The three mile paved trail runs along the Colorado River and a wetlands area. It is not a loop so we actually rode six miles out and back.

With all the desert around us here in Yuma, it was refreshing to see some fresh water. I didn’t realize there was a wetlands area here. Part of the bike path is between the wetlands and an irrigation canal.

This egret was enjoying a beautiful sunny southern Arizona day. 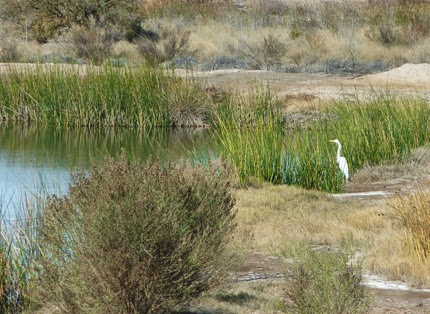 There were a few ponds along the way. We saw mostly American Coots, but there were also a few ducks swimming around. 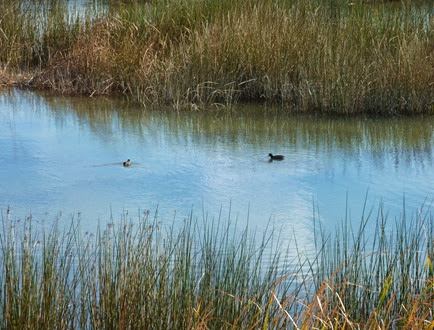 The Ocean to Ocean Highway Bridge is next to Gateway Park. The bridge is celebrating its 100th birthday this year. At the time of its opening in 1915, the bridge provided the first safe, economical crossing of the river at Yuma, and it was the only vehicle bridge across the Colorado River for 1,200 miles. It was a critical link in joining the Atlantic to Pacific Oceans with a highway. Can you believe it only cost $72,150 to build!

Only one lane of traffic can cross at a time so there are stop lights at each end. There have been several restoration projects over the years, but it is pretty amazing that it is still in operation after 100 years. In fact, the original timber was covered in concrete and remains to this day. 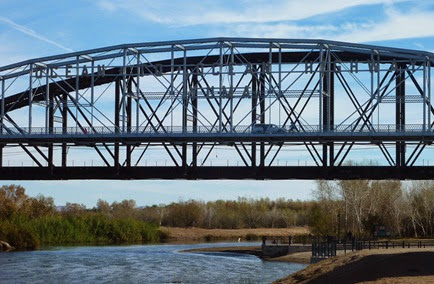 There is a second bridge behind the Ocean to Ocean bridge that I believe is for trains. If you click on the picture to enlarge it, you will see the six foot tall letters with the name of the bridge. Hanging from the center of the bridge was a doll hung by its neck. What’s the matter with people!

We chose to go biking yesterday rather than join the Monday hiking group because my knees have really been bothering me. I did some research online and found that hiking down a steep slope is just about the worst punishment you can give your knees. That’s just what we had done the week before.

I have some arthritis in my knees, but they’ve never really given me much trouble. I thought I could just ignore the pain and keep going, so we played pickle-ball last week, and I went to Aqua Zumba. No wonder my knees weren’t improving. My research said I need to rest and elevate them. So, I’m taking it easy this week. I figured biking wasn’t too hard on them as I wasn’t putting as much pressure on them.

On Sunday Dick and Wanda came over again to watch the Packers play the Seahawks for a spot in the Super Bowl. The Packers were winning all the way through, and it looked like our team was headed to the Super Bowl again. Kevin and Dick were even making plans to go to Phoenix to take in some of the activities the week before the big game.

Unfortunately, our team totally self-destructed in the last five minutes and ended up losing in overtime. That was sure a big disappointment. Oh well, baseball season is just around the corner.

This morning I saw this hot air balloon out the window as I was reading blogs on my computer. We’ve seen quite a few of them in the area since we’ve been here. I saw an ad to ride in one for $250 a person. I believe I’ll continue enjoying them from the ground. 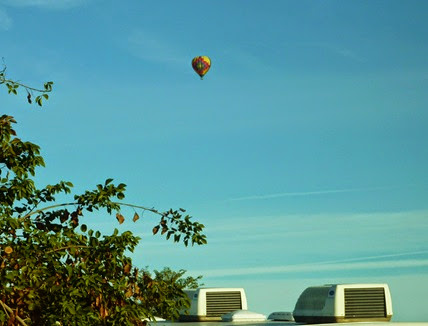 As you can see, the sky is blue. Our weather has been fantastic this past week with highs in the upper 70s and lows around 50. Next week is predicted to be more of the same. I am so grateful to be able to experience winter here in Yuma. I so love my daily dose of sun!!

Posted by RV Khronicles of Kevelyn at 10:47 AM 3 comments: Links to this post