Before leaving the area, we wanted to head north one more time and visit Goose Island State Park. Friday was a beautiful day so we headed to the ferry.

While waiting in line for the ferry, we again saw several dolphin. This guy was quite close to us, and he had something in his mouth. I’m not sure what he has, maybe a fish. 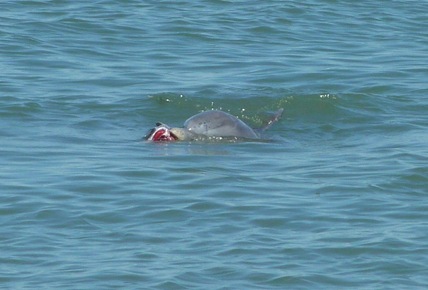 We stopped at the Goose Island State Park office to get our vehicle pass using the Texas State Park annual pass we purchased while in Mission. There was a line with several people checking in for campsites. A fight almost broke out over some of the waterfront sites. If you want a particular site that bad, make a reservation!

We drove through the park to get a lay of the land. We stopped by the waterfront sites and walked out onto the long fishing pier. If we ever come back to this area, we would definitely stay in these sites at this park. They have 50 amp electric service and water. Each site has a shelter over the picnic table. The sites are on a channel, so I think there wouldn’t be as much wind and salt spray as parks with sites on the Gulf of Mexico. 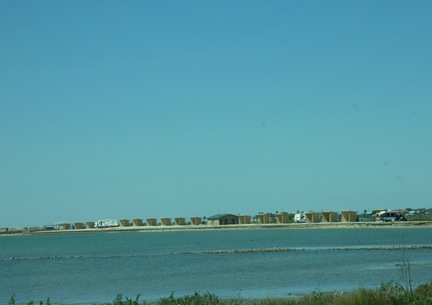 Our next stop was actually back out of the park several blocks away to see The Big Tree. It’s on park property, but not in the main section. According to the sign, this coastal live oak tree is  over 1,000 years old. It is 35 feet around the trunk, 44 feet tall and 89 feet across the crown. Wow! There was an interesting timeline on the sign highlighting events in history this tree would have witnessed at different stages of its life, from Native Americans to Spanish explorers to Civil War soldiers passing by. 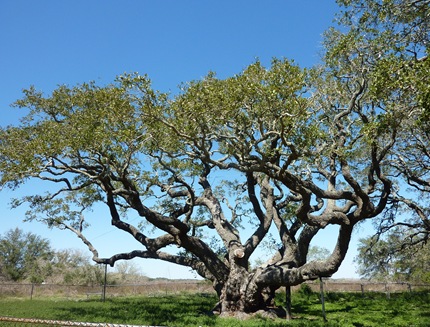 We had heard that there were some Whooping Cranes near The Big Tree so we drove around the area looking for them. Unfortunately, we didn’t see any.

We went back to the main part of the park and wandered around a bit. I enjoyed watching some white and brown pelicans competing for scraps from people cleaning their fish.

We have white pelicans on Beaver Dam Lake where we camphost in the summer, but they are always quite a ways out in the lake, and I’ve never seen them up close. They sure are beautiful birds! As you can see, they are considerably larger than the brown pelicans. 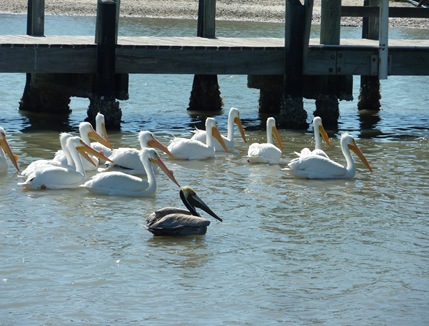 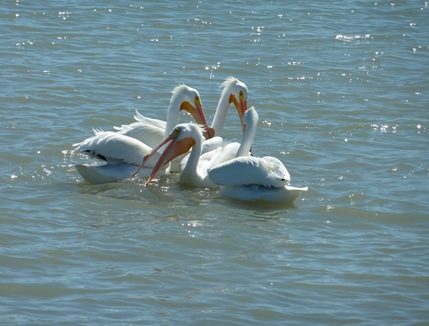 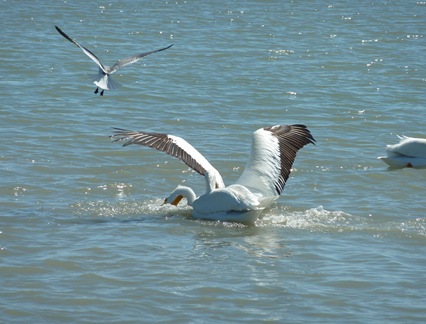 We drove to the wooded camping loop, and I spotted the van of our neighbors at the RV park we were at in Mission. They had told us they were coming to this park to be the bird hosts for the month of March.

We stopped to say hi, and I told them how we had looked for the Whooping Cranes but didn’t see any. They offered to drive back over to the area and see if they could help us find any.

Sure enough, they turned down Fourth Street and they spotted two Whooping Cranes in a field. We even saw some fly overhead. 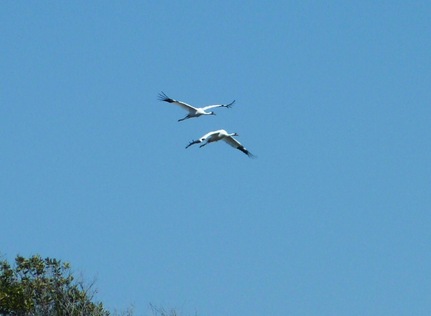 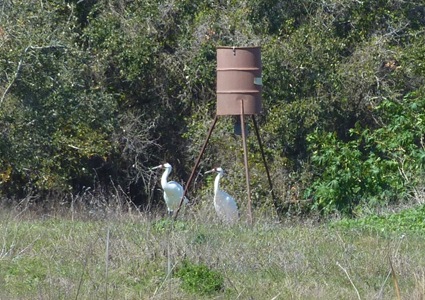 The metal container is a corn hopper that has been put out for them. The cranes eat blue crabs, but with the drought Texas is suffering, there are very few crabs for the cranes to eat.

These birds were at one time almost extinct. There are now thought to be between 400 to 600 in the world, and they are still on the endangered list. How cool to see them in the wild with only so few in existence.

A big thank you to Ed and his wife for taking the time to go with us. Ed even had his scope, so we got to see the cranes up close.

As we came through Aransas Pass on our way home, we saw quite a bit of smoke. There was obviously a good sized fire somewhere. We saw one fire truck and one police car heading in the direction of the fire.

We continued on to the ferry to head back home. We have seen many types of vehicles on these ferries, from semi trucks to all kinds of RVs and other cars, trucks and SUVs. While waiting in the line to board the ferry, we saw a very unexpected vehicle exit one of the incoming ferries. It was a fire truck from Port Aransas. As soon as it left the ferry, it turned on its siren and lights and took off.

Later we heard on the news that the fire in Aransas Pass was a large grass fire and several surrounding departments had been called for help. In fact, 60,000 acres ended up burning along with one mobile home. A nearby RV park and other area residents had to be evacuated. Between the drought and frequent high winds there have been many days with high fire warnings during our stay here.

We leave here on Monday to spend a few weeks exploring the Hill Country of Texas. We very much liked the city of Port Aransas, Marina Beach RV Park and the birds, dolphins and sea turtles we’ve seen. What we didn’t like so much was the weather. We had some very nice days, but the coast is just too windy. I doubt we’ll be back.

Posted by RV Khronicles of Kevelyn at 7:12 PM 2 comments: Links to this post