Yesterday we took a three hour bus tour of New Orleans. This was another Groupon deal. We’ve done four tours using Groupon coupons, and have been very satisfied. Each of them was with a company that was not one of the most popular, but they were all very well done, and we saved quite a bit of money.

The bus tour was with Southern Style Tours. Our driver, who was also the guide, was very knowledgeable. Its amazing to me that he could navigate these small streets in the mini bus and keep up a constant stream of information.

We toured the French Quarter, The Garden District, downtown, one of the many above ground cemeteries, City Park, and several of the wards that had the most damage after Hurricane Katrina.

Many homes are decorated for Mardi Gras. Most have banners, ribbons, etc. with the traditional purple, gold and green colors. This was definitely one of the most unusual ones we saw! 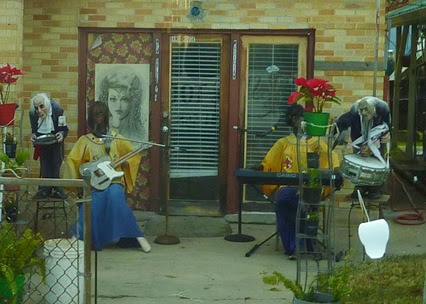 I didn’t take many pictures. It’s hard to get good shots out of a bus window; and to be honest, there wasn’t much I wanted to take a picture of. I just enjoyed sitting back and listening to all of the stories our guide shared with us.

Burial rituals in New Orleans are quite interesting. Because much of the city is at or below sea level, caskets are buried above ground in vaults. There is a whole complicated process of how the casket is placed in the vault for a year and one day, then taken back out so the remains can be cremated and returned to the vault to make room for the casket of the next member of the family that dies. Some families spend over a million dollars for their burial vaults. My thinking is why not just cremate them in the first place. However, we’ve learned in our travels that different cultures have very different ideas of how things are done. That’s what makes us all so unique, I guess.

We have been very surprised how many of the buildings have not been either rebuilt or demolished since Hurricane Katrina. As we have traveled around the city, we have seen many, many houses boarded up or falling apart. Our guide told us that there are over 25,000 houses still abandoned. There are also quite a few businesses and even public buildings such as schools still sitting empty. It’s been 8.5 years since the disaster. I would have thought these homes would have been demolished if the owner’s weren’t coming back. 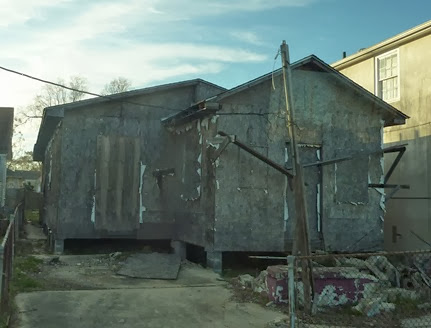 Part of the problem has been local politics. Just this week the mayor during the storm, Ray Nagin, has been convicted of twenty counts of fraud stemming from bribes he took with relief money. The news is full of stories about other trials still stemming from matters to do with the hurricane.

This sculpture in remembrance of Katrina is downtown across from the convention center. 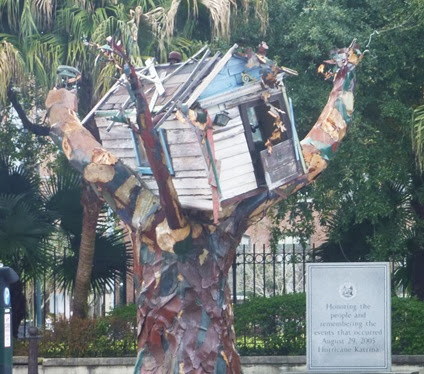 We’ve enjoyed learning about the history and seeing some of the beautiful architecture in the French Quarter. There is definitely a charm to the area, but mostly the city is old, run down and dirty filled with too many people and cars. Just not our cup of tea. It was an interesting visit, but I doubt very much we will ever come back.

Posted by RV Khronicles of Kevelyn at 3:50 PM No comments: Links to this post