A First For The Park

It was a pretty small affair. I would estimate there were maybe 60 to 70 people in attendance. They rented our Quonset hut for the day on Saturday and held the ceremony outside in the park.

On Friday evening they came and set up an arch and some chairs in the shade. What a beautiful location to have a wedding ceremony. You can’t see it from this angle, but the lake is behind the arch making for a beautiful view. 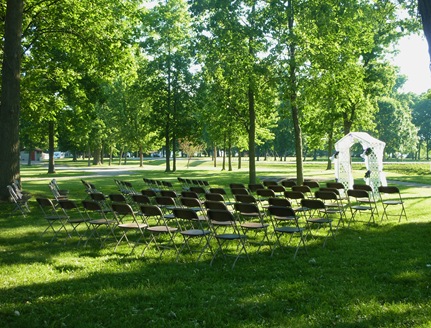 They also did some decorating in the hut on Friday evening. It’s not the most beautiful location for a reception, but the price is right. It costs $55 for the day to rent it and they were only charged for one day even though we let them in on Friday evening to set up and on Sunday morning to clean up. Can’t beat that price. 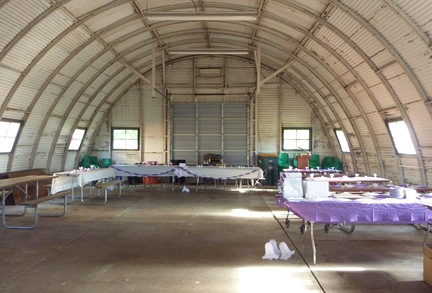 Saturday’s weather was fantastic. It got a little warm with highs near 90, but the dew point was low. There was a bit of a breeze to help keep you comfortable. We sat out in the shade and watched the festivities.

There were about 30 cars here. We don’t have parking for that many cars, but since it was so dry we let them park on the grass. Once the reception got underway, they opened the back garage door you can see above. They had a bunch of picnic tables outside and spent most of their time outside. Eating was done inside. 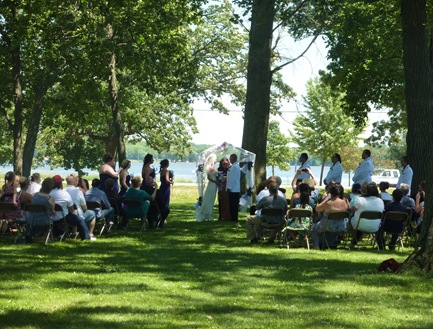 Do you see the lake behind them? A beautiful site for a beautiful wedding.

One of the attendees told us it would be an Indian wedding. We weren’t sure what to expect. I believe the groom was Native American. The music and the man who conducted the ceremony were Native American. Otherwise, it was pretty much a standard ceremony, although very short. 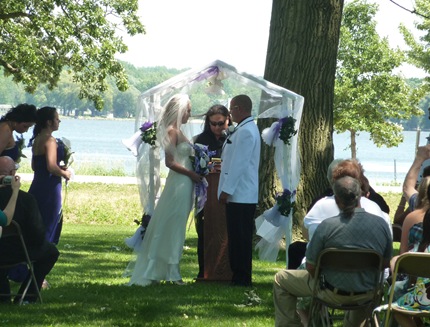 They had a sound system set up so there was music and dancing after they ate. The wedding was at 1 pm and then they went right on with the reception. Originally they had asked if they could use the building until 11 pm. Normally, the rental period ends at 8:30 pm. Kevin said sure, but with such an early start they were actually out of there by 8:30. Several of them had rented campsites, and those that remained enjoyed a campfire. This morning they’re out there cleaning up.

This event got me to thinking about how Americans spend money. I just happened to hear on the news last week that the average cost of a wedding is now $27,000. Yesterday showed that it can be done for much less money and still be a meaningful and wonderful event.

Neither of our boys are married yet, so we haven’t had the joy of a wedding for our children. I don’t know that I’d be happy with the Quonset hut for a reception, but I also don’t buy into the media and marketing people’s idea that the more you spend the happier you’ll be. Our lifestyle is an example of how that’s just not true.

So, kudos to these families for putting on a beautiful wedding for their children on a limited budget. I’m sure their memories will be just as wonderful as if they had had a huge, expensive event.

Posted by RV Khronicles of Kevelyn at 10:47 AM 7 comments: Links to this post