We’re on the Move

We left Buckeye this morning and are on our way to Deming, New Mexico.  We enjoyed our stay at Leaf Verde RV Park.  The rates were very reasonable, and it was a nice place to spend a month.  Our electric charge for the month was only $31.  Quite a bit different from the $115 in Yuma.  Granted it was colder at night in Yuma, but they still charged far too much for electric; almost double what we paid at Leaf Verde.  Just my two cents worth :)

I must admit that I am baseballed out.  We attended 9 or 10 games in a four week period.  I enjoy baseball, but Kevin is the true fan in the family.  I’m sure he enjoyed every minute of it!!

I also must say that I’m disappointed in the “desert bloom”.  Everyone kept telling me how beautiful the desert is in spring.  Maybe this is just not a good year for it or we’re in the wrong part of the desert.  I haven’t seen any blooming.  The only blooming I’ve seen is the oleander bushes at the resort.  Most resorts in the desert use oleanders as privacy hedges.  There is a large row of them along the edge of the park.  They are just starting to blossom.  They are very pretty, but not the desert bloom I was anticipating.  So far, New Mexico isn’t blooming either. 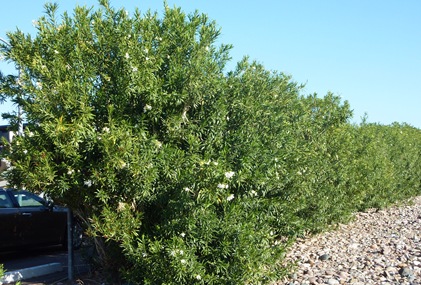 We didn’t do much this week.  On Monday we had tickets for a Brewers game.  Believe it or not, it actually started raining Monday morning, and it was only in the 50s.  Brrr!

I called the ballpark, and they said the game was still on.  Since we had tickets already and it was a bobblehead giveaway day, we drove over.  We got our bobbleheads and waited a little while.  When it started raining harder and they rolled out the  tarp, we decided to call it a day.  The game ended up being cancelled.  Our tickets can be exchanged for any Spring Training game in the 2012 or 2013 season.  Good deal.  Thanks, Brewers.

We just stopped at the New Mexico Welcome Center.  I am now loaded up with brochures.  I’m sure I’ll find plenty to keep us busy for the next three weeks before we make the final trek to Wisconsin.

I’m sure glad it’s not real windy today.  There are warning signs along this portion of Highway 10 regarding zero visibility due to dust storms.  They have signs that say “don’t stop in travel lanes”.  I’m thinking that’s very good advice :)

Our drive today is about six hours.  That’s longer than we normally like to do, but there really wasn’t anywhere between Buckeye and Deming that we wanted to stay.  We’ve found Passport America campgrounds to stay in for most of our trip back to Wisconsin. So, Kevin has a longer than normal driving day today :(  I know, you’re crying for us.

Posted by RV Khronicles of Kevelyn at 4:47 PM 2 comments: Links to this post