I’ve finally finished some of my quilting projects that I purchased last year at Quilt Expo in Madison.  I loved these flower panels, and made this lap quilt for myself.  The colors are even more vibrant than the picture shows. I love how it turned out. It has found a home hanging over the back of my recliner, ready to keep me warm. 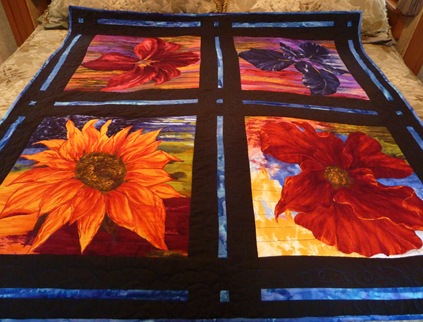 I used some techniques I learned at the free-motion quilting class I attended in June. I used a stencil I had purchased on clearance a few months ago. I drew lines using the stencil for the quilting along the borders. I used a quilt marker where the lines disappear when you iron over them. It worked great. Even though I had lines to follow, I used the free-motion foot on my machine. I wasn’t always able to follow the lines exactly, but I think it turned out pretty good for my first attempt. 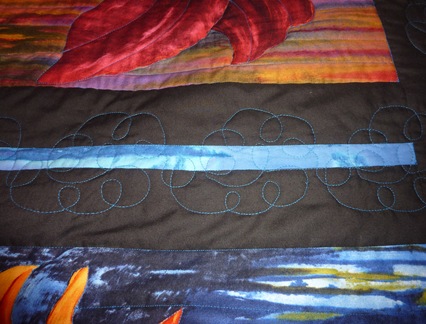 The other project I completed are some placemats my mom will be getting for Christmas. She doesn’t use a computer, so my showing you won’t ruin the surprise.  I’m very pleased with how they turned out. The pictures are of my mom and her friend, Richard; my brother and his wife; our two boys which are her only grandchildren; and Kevin and myself in the Rocky Mountains.
I used my printer to copy the pictures onto photo fabric. It was a fun project! The sample pictures on the pattern show buttons sewn along some of the edges. I think buttons would not work well for placemats; your plate wouldn’t be flat. So, I’m going to try to find some other trim to embellish the mats. Maybe some ribbon or bric-a-brac kinds of trim. 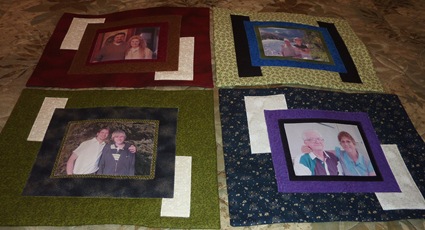 Our area was pretty dry this summer, and we were about 5 inches below average for rainfall. Well, we’ve been catching up. It has been raining off and on for three days. Last night and this morning it rained very hard, so I think we’re definitely getting caught up.  It really feels like fall.
I sure wish the weathermen would get their forecasts right more often. Eric was planning on residing his garage this fall. We had offered to help take off the old siding and then Eric and his roommate would put up the new stuff over the weekend.  After watching the weather early last week, the forecast was for sunny days all the way through the weekend.
So, on Thursday Kevin and I went to Eric’s house and took off all the old siding. Kevin did most of the work, I was the helper removing lots of nails from the old pieces. Unfortunately, an unexpected front came up from the south, and suddenly the forecast was for rain all weekend. Gosh darn it! They did get most of the siding done on Saturday in between some rain showers. It’ll all be okay, but I wish those forecasters would get it right!
On Thursday on our way to Eric’s, Kevin and I stopped at a lab to get drug tested for our job at Amazon. They sure do a very thorough check on their temporary workers. They require a high school transcript, a background check, and a drug test. It makes me kind of sad that employers have to be so careful when hiring workers. Not a very positive reflection on our society. The good news is we hopefully won’t have to worry about what kind of co-workers we’ll be dealing with.
Two weeks from today we head south!
Don’t wish upon a star – Reach for one!
Posted by RV Khronicles of Kevelyn at 6:54 AM 2 comments: Links to this post