Yesterday we visited Rock City, the last of the three attractions on Lookout Mountain. It's an unusual place mixing natural beauty with touristy type traps. They describe themselves as a geological and botanical wonder.

It began in the 1920s when Garnet and Frieda Carter began to develop a large walk-through garden on their private estate. They marked paths through the huge rock formations. Frieda gathered over 400 varieties of plant life to form gardens. In 1932 they opened their Rock City Gardens to the public.

We wandered through the maze of paths until we got to the highest lookout point. Along the way there were interesting rock formations and some tight squeezes through the rock walls. Here is a view of Lover's Leap. There is a waterfall coming down from the top into a pool. Legend has it that two Indians from warring tribes fell in love and eloped. When their families caught up to them, they threw the groom off the cliff. His distraught bride jumped after him. Gruesome story!! 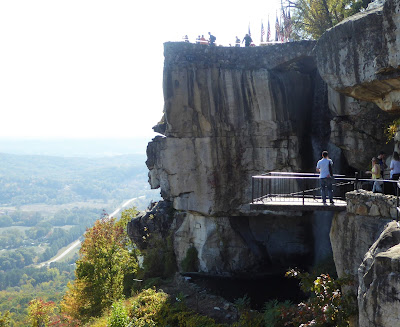 Seven states are supposedly visible from atop. It was a bit hazy, so I have no idea if we actually saw all seven of them, but I'm going with it. 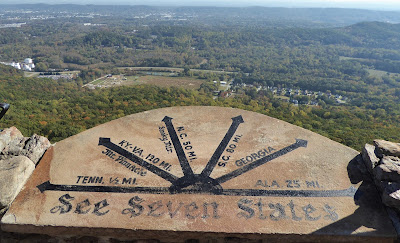 Flags from each of the states are also on display at the top. 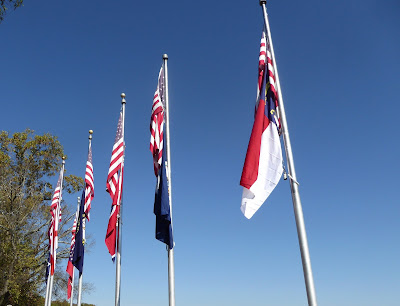 Views from the top were spectacular. This corn maze was visible; a different perspective than you usually get of a corn maze. 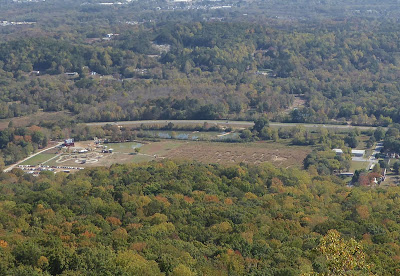 Frieda collected statues and gnomes which are on display throughout the gardens. I particularly liked this eagle statue with the fall leaves behind it. 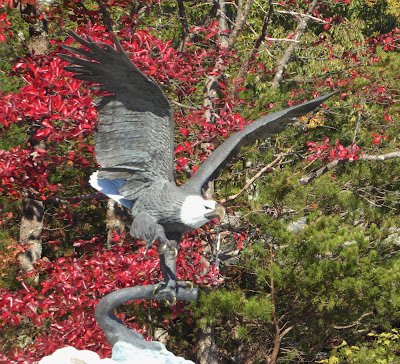 Each weekend in October they are celebrating "Rocktoberfest". We sat and enjoyed listening to a German band while Kevin tried their Octoberfest beer. One of the band members played a song using cow bells. Pretty awesome. 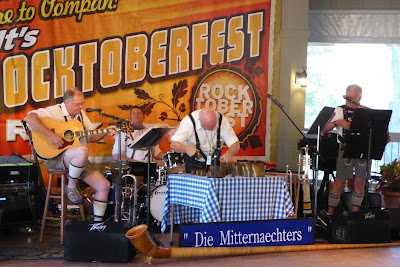 They also have a raptor show three times a day. I think this was the best part of the place. Several raptor birds were brought out and the presenters told us about them. A few of them even flew over the heads of the audience. All of the birds are not able to live in the wild for various reasons mostly having to do with human imprinting.

This is a barred owl. 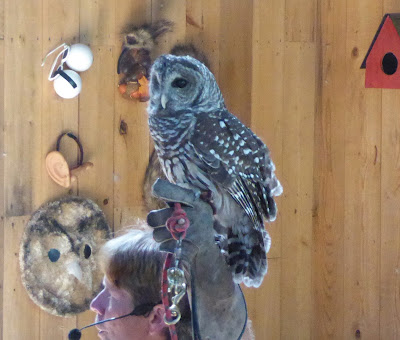 Next is a barn owl. The circular disk around their face acts like a satellite dish and makes them hear super well. 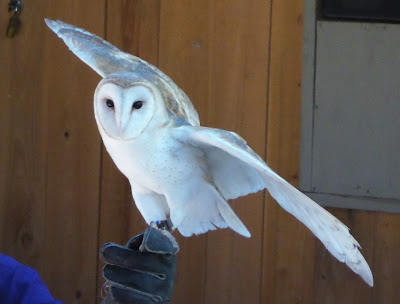 This eagle was shot when it was quite young, and its left wing had to be amputated. His handler is an avid hang glider and has fashioned a sling so the eagle "flies" with him. How cool is that. He's even written a book about their adventures. 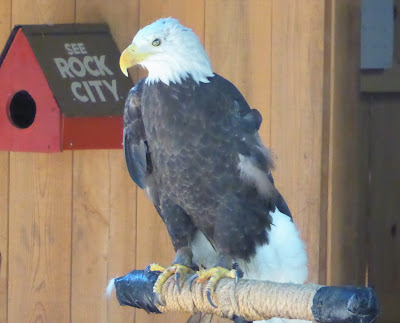 Of the three Lookout Mountain attractions, I think Rock City was my least favorite. It is a pretty area and the path through the rocks was pretty cool, but that was about it. Having the German band there made it more interesting, as well as the raptor show.

As you continue to follow the path towards the exit, you go through Fairyland Caverns. Inside are scenes depicting different fairy tales using figures and black light. I'm sure kids enjoy it.

The Carters were certainly ambitious and entrepreneurial. Garnet invented the first miniature golf course called Tom Thumb which became a franchise. He also started a unique promotional campaign to bring tourists to his gardens. At its peak the phrase "See Rock City" was painted on over 900 barns along highways leading into Chattanooga. It's amazing to me that this somewhat hokey attraction still draws huge crowds, including us :)

Aside from the attractions, Lookout Mountain has many grand and stately homes on top as well as some Bed and Breakfast hotels and even a Starbucks. It's a pretty place, but the road going to the top is very narrow and windy.

Don’t wish upon a star – Reach for one!
Posted by RV Khronicles of Kevelyn at 6:59 AM No comments: