Dinner and a Cold Front 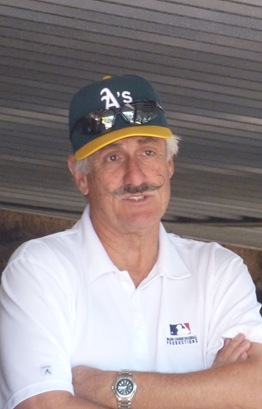 Our son Korey was the only one who identified the person correctly on my last blog posting. The picture is of Rollie Fingers, who was an amazing closing pitcher on the Milwaukee Brewers in the early 1980s. He was known for his handlebar mustache. Carol guessed correctly that he was wearing the wrong hat. I didn’t know that he had spent most of his career as an Oakland A. So, I was taken aback when I saw him wearing that hat. To me he was only a Milwaukee Brewer.

On Saturday Frank and Betty invited us to their rental condo for dinner. They’re staying in Sun City West in a very nice one bedroom condo. They fixed a delicious corned beef and cabbage dinner. We brought a bottle of wine and an apple pie for dessert.

I had meant to bring a corkscrew with us in case they didn’t have one but forgot it. The condo did not have a corkscrew, but Frank came through. He was able to push the cork down into the bottle using a screwdriver, and we managed to drink every last drop :)

There is an orange tree growing on their patio. The blossoms smelled so nice. I could actually smell it as we walked up to the front door. Betty sent us home with a big bag of oranges from the tree and some grapefruit that were being given away at their rec center. I’ve never seen such huge grapefruit. So far, I’ve eaten two oranges and they’re very good. 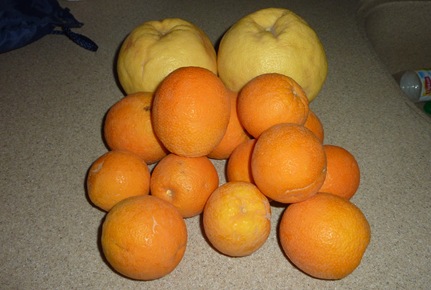 On Saturday night a cold front came through Arizona. Northern Arizona was under a winter storm warning. Flagstaff has gotten two feet of snow and many roads up there were closed yesterday.

We got an inch of rain which was very welcome in the Phoenix area. They haven’t had any measurable rain since December and were two inches below average for the year. Some areas also had hail, but luckily we didn’t get any of that. Yesterday and today highs are only expected to be in the high 50s. Brrrr!

I know the Midwest has been warmer than us for two days, and I’m happy for all of you. However, I’ll take two days colder and the rest of the winter warmer :)  By the end of the week we’ll be back in the 80s.

Kevin spent most of the weekend glued to the NCAA basketball tournament. Both of the Wisconsin teams won and are still in the hunt. I did some sewing and watched some shows on the computer. The wi-fi at the park is free. Sometimes I’m able to stream video and sometimes it’s too bogged down. Today we’re going to run some errands and stop at Camping World to pick up a few supplies.

Posted by RV Khronicles of Kevelyn at 9:58 AM 2 comments: Links to this post