Call it whatever you want, but Kevin had three pars in a row during our golf round today! And, on the first three holes, no less. Usually the first hole or two aren’t that great until you get into the groove. He also had his best score of the season, a 46!! He thinks it might be the best score he’s had on the front nine at Kestrel Ridge Golf Course, which is where we played today.

I had some great shots and some lousy shots, so what else is new. I did have some very good holes and then two really bad holes. Overall, I can see that I’m improving. It’s amazing how the more you play, the better you get. I guess it’s true that practice makes perfect.

It was a beautiful day. Columbus High School is near the golf course, and I could hear the marching band practicing on the football field. It brought back some very fond memories of when our boys were in the high school marching band.

Last week was the Dodge County Fair, and we had several sites occupied by people who told us they were going to the fair. Yesterday was Demo Derby day at the fair. Late in the afternoon, this vehicle came into the park. I didn’t ask how they placed, but it sure looks like they were involved in the demolition part of the derby! 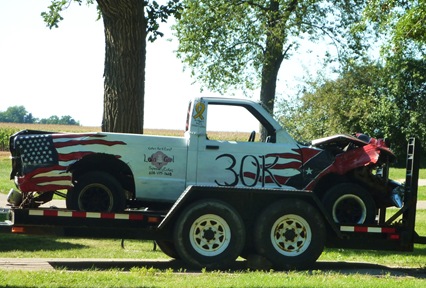 Posted by RV Khronicles of Kevelyn at 5:53 PM 2 comments: Links to this post