Most National Parks and Monuments we’ve visited since leaving Wisconsin have stated in their literature that Big Horn Sheep reside there. We have looked and looked, but have not spotted a single one. It’s become kind of a joke between us. We just laugh whenever we see any mention of the sheep.

Today we visited Santa Rosa and San Jacinto Mountains National Monument near Palm Desert, California. This area has only been a National Monument since 2000. Representative Mary Bono (widow of Sonny Bono) introduced legislation to establish the area and it was signed into law by Bill Clinton on October 24,2000.

We stopped at the very nice visitor center and an enthusiastic young woman gave me some great tips on what to see and where to hike. She got me very excited about actually seeing the elusive Big Horn Sheep.

There had been some sightings in the past week in Dead Indian Canyon. Certain areas are actually closed beginning January 1st to protect the sheep during lambing season.

So off we went on a 1-1/2 hour hike. We searched the cliffs until our necks were hurting from looking up. Not a sheep was in sight. I’m really beginning to think these people are imagining them :) 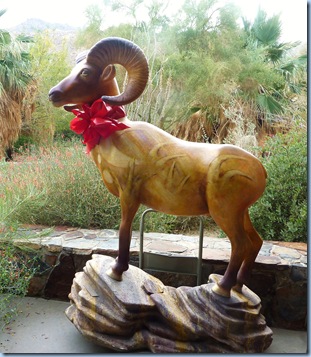 This was the closest we got to a sighting.

We did see other amazing sights on the hike. At the end of the canyon is a Palm Oasis. We didn’t know it was there and all of a sudden we saw palm trees in the distance. They’re at the very back of this canyon. 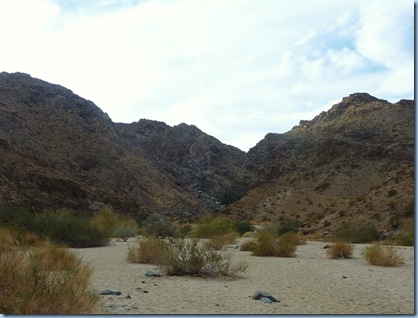 We didn’t hike to the very end of the canyon as it was getting dark, but we did get pretty close to the palms. 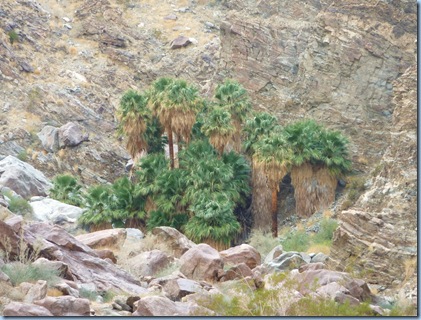 This cute little bird was happily whistling. I think it’s a male Phainopepla. 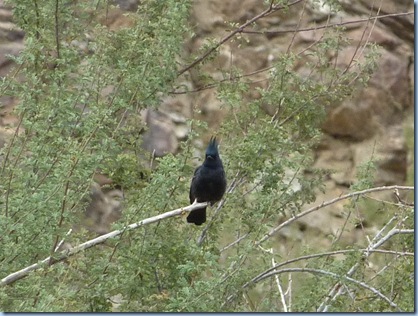 We drove up to an overlook along a very windy road. These are the Santa Rosa Mountains. 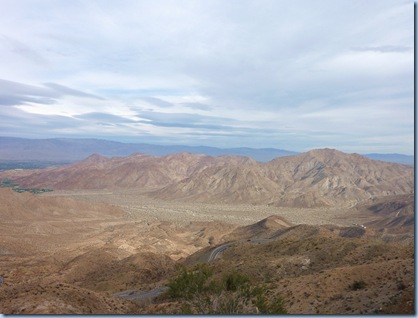 The wind really picked up early this morning and I was up about 5 a.m. in time to witness the most amazing sunrise I have ever seen. 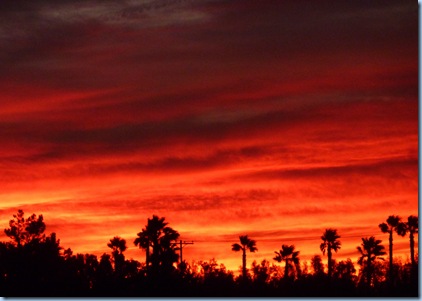 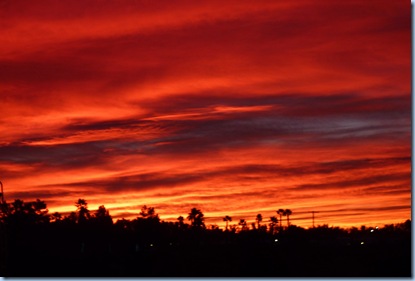 I need to rant just a little bit about Local 2485 of the AFSCME union. When I announced I was retiring from my job in the Waukesha School District, a co-worker told me there was a $200 union retirement benefit. I emailed the local union rep and she wasn’t sure if I qualified, but would check into it.

After 8 months of emails, phone messages, and letters to the rep, treasurer and president of the local; I never received a single response. Yesterday I left a message at the state office. One of their employees called me this morning and I explained that all I wanted was either a check or a copy of the policy stating what the qualifications were if they claim I didn’t qualify. He said he’d check into it. Within 10 minutes he called me back and said the policy is you have to be at least 55 and have 10 years of service with the district. I was only at that district for 7 years and was 52 when I left. Now what was so hard about that.

Based on my experiences and stories from some of my former co-workers, that union is the most useless organization I have ever been forced to be a part of!

I’m done ranting, thanks for listening :)

Posted by RV Khronicles of Kevelyn at 9:17 PM 6 comments: Links to this post