A Winery in Nevada

Who would have guessed that there would be a winery in the Mojave Desert in Nevada.  Yesterday we discovered the Pahrump Valley Winery.  It is a very nice building with beautiful grounds at the end of a road near the mountains.

They had a free tour and wine tasting.  They grow a couple of different type of grapes and import other grapes from California and Oregon.  All wine is made on the premises.

We found a blush that we both liked so we purchased two bottles.  One for Christmas dinner with the boys, and one for New Years Eve. 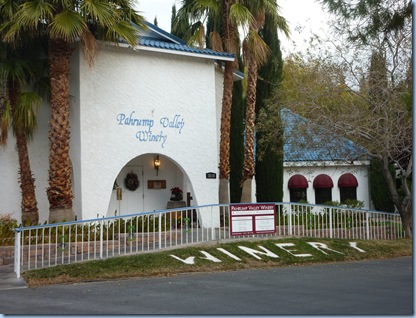 We rode our bikes for an hour yesterday.  We haven’t done much riding this year because we were either in very hilly areas or high traffic places.  We found some nice paved roads with little traffic near the campground.  There are so many unpaved roads in the west.  We are used to the Midwest where almost all roads are paved.

We checked out the Pahrump Valley Museum while in town.  Good thing it was free because it really wasn’t much of a museum.  There were a bunch of display cases with old stuff in them.  Things were not very well organized, and many of the items didn’t relate to this area.  I think they just take anything old someone will donate :)

The most interesting part of the museum was the elderly gentleman who greeted us as we came in.  He was very knowledgeable about the area.  He explained how the town really didn’t have much population until the 1990s.  At that time the housing market was booming all over Nevada.  According to him, people in Pahrump were too dumb to figure this out and were selling land and homes at a very cheap price.  Many retirees purchased property at that time.

He also told us how there are many developments planned, but everything came to a halt with the poor economy.  There are for sale signs everywhere.  We also noticed what look like whole subdivisions of roads, but not a single house in them.

I’m not too impressed with Pahrump.  To me the town appears rather dirty and rundown.  The landscape is brown, brown and more brown with some mountains in the distance.  I think I’m just missing green grass :)

Today we did a major stock-up on groceries.  We found a store called Smith’s with very good prices.  Since we’ve heard California is expensive, we figured we’d fill our cupboards.  I think we’ve got a month’s worth of food.  We shouldn’t have to shop much until the boys come.  Then it will be time to stock up on snacks :)

We also bought a 4 foot pre-lit Christmas tree at Walgreens today along with some ornaments.  Since we’re leaving tomorrow morning, I won’t set it up until we arrive at the next stop.  I have some special ornaments I saved, but I left them in a storage bin in our son’s basement.  I’ll bring them next year for sure.

We’ve rented a movie at Redbox each night for the last three nights.  We watched Robin Hood, The Sorcerer’s Apprentice and have Eclipse for tonight.  I love Redbox.  Kevin’s out getting pizza from Papa John’s for supper.

Although we enjoyed last month in the desert, we did miss being closer to civilization.  We’ve made up for it this week :)

The good thing about last month was our budget.  Since there weren’t many places to go to or shop at, we had our best month so far.  It’s a good thing since I’m sure we’ll be blowing the budget this month in California.