Yesterday was a beautiful day here on Galveston Island. Most of the day was sunny and highs were in the low 60s. We took advantage of the wonderful weather by doing some exploring.

First on the agenda was a trip on the free ferry from Galveston Island to the Bolivar Peninsula, which is part of the mainland. We saw a couple of large motorhomes on the ferries. The main reason for riding the ferry was just because I like riding on them, and I wanted to see some dolphins. I got out of the truck and stood at the front of the boat. I saw several dolphin on both trips, as well as lots of ships in Galveston Bay. I didn’t try to get any pictures of the dolphin. Sometimes, you just have to enjoy the moment :)  Here’s one of the ferries. 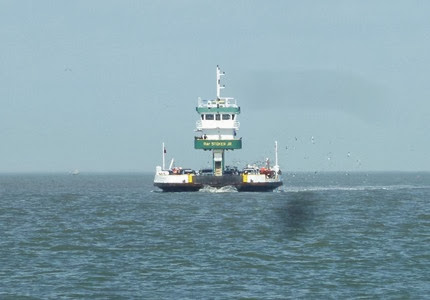 And a Carnival and a Disney cruise ship in port. 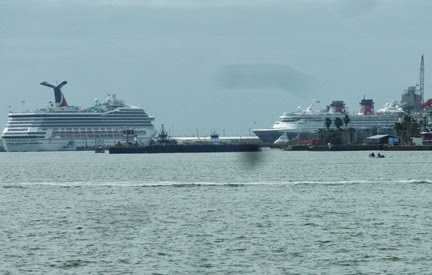 As you can see, that darn spot on my camera lens is still there. Thanks to a couple of readers who informed me the spot is probably dust on the inside of the lens. One reader suggested tapping the camera and seeing if I could dislodge the dust. I did that last night, and it seems to be gone. Keeping my fingers crossed.

We stopped at Fort Travis Seashore Park in Port Bolivar to see the remnants of Fort Travis. It was the first coastal fort built in Texas and named after William Travis, the commander at the Alamo. It was used for coastal defense during WWI and II, and later served as a refuge during hurricanes. There are a few bunkers left, but not much else to see. 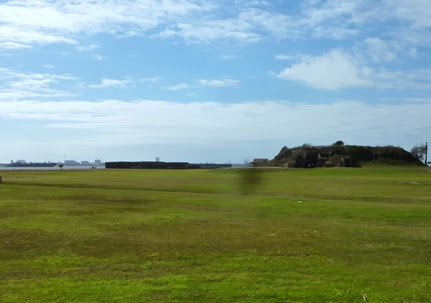 After the ferry ride, we headed to Strand Street to explore the old historic area of Galveston. Strand Street was considered the Wall Street of the south in its heyday. Many products were shipped through Galveston and business was booming. Some of the old buildings are still quite impressive. Now it’s a touristy area near the cruise ship docks.

The Galveston Custom House is the oldest civic building in Texas built in 1861.  It hosted the ceremony which ended the Civil War in Texas. Its fireproof cast iron structure has kept the building standing during fires, war and hurricanes. 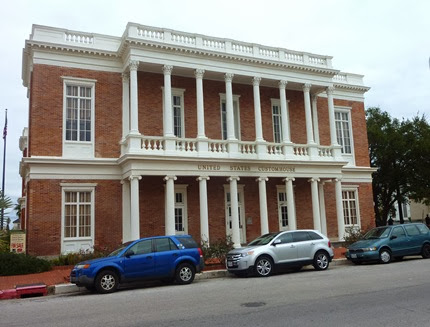 The Grand 1894 Opera House has been restored and is still hosting performers to this day. While we were here there were some comedians performing. We didn’t go inside, but it’s an impressive looking building. 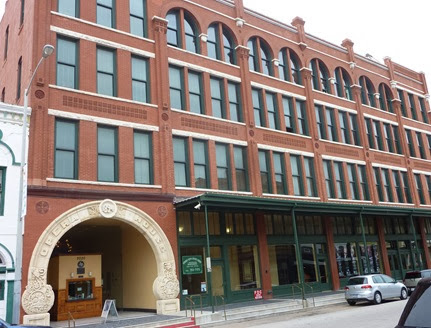 A few blocks from the downtown area is the historic residential area. There are many gorgeous Victorian style homes in this neighborhood. Some of them have been beautifully restored. I loved looking at them, but all I could think about was the money and time these homes would require.

On September 13, 2008 Hurricane Ike covered most of Galveston Island in a tidal surge. One of the terrible results was that the powerful winds and waves uprooted thousands of beautiful large Oak trees in these neighborhoods. Some homeowners have hired artists to carve sculptures from the remains of these trees. There is actually a self-guided walking tour. We spent about an hour walking the streets of the neighborhood admiring some of the sculptures and homes. This sculpture was in honor of the homeowner’s Great Dane. The tree had actually grown around the fence at the spot the paws grip the fence. Lots of the sculptures were decorated for Christmas.

The tree this Geisha came from was as tall as the electric wires that run over the street and touched the house. The top of the tree was carved into an angel sculpture that sits in the front yard of the house.

Here’s the Tin Man and Toto. 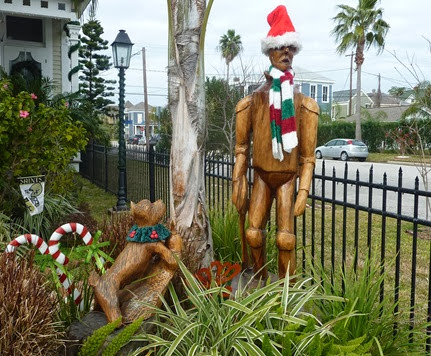 This mermaid had a scary looking face, but I liked the overall sculpture and the house behind it. 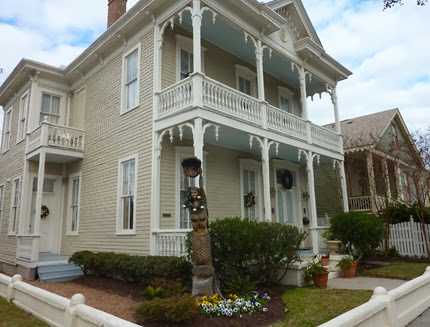 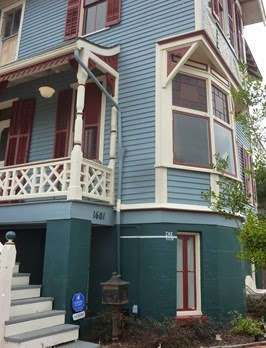 One of the houses had a line painted on it showing how high the water from Hurricane Ike reached. It’s the white line at the top of the bottom window. I sure hope they didn’t stay in the house during the storm.

This is called Bishop’s Palace. It was built in 1886 for a railroad magnate. These places must have been amazing to live in all those years ago! 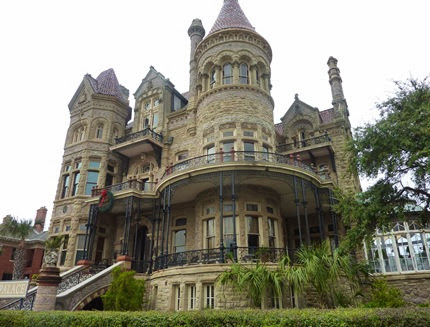 One last house to show. This is the Moody Mansion Museum. It was the home of one of Texas’ most powerful families. 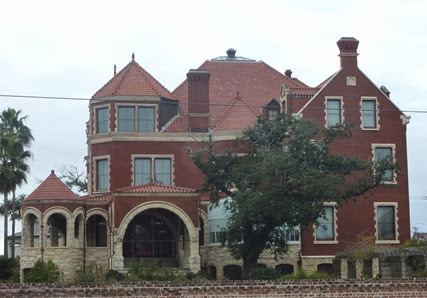 After arriving back at the RV park, I took advantage of their hot tub and soaked my tired feet, as well as the rest of me. The hot tub here is as big as many pools at other parks. It’s brand new and enclosed. There is one whole wall of windows covered with plastic overlooking the pond. I’m guessing that stays open during warmer weather. It was heavenly!

This morning temperatures were still in the 60s so I suggested a walk on the beach before the cold front came through. Shortly after we turned around after 30 minutes, the wind shifted to the north and got strong. It also started raining, so the walk back was not too nice. Oh well. The temperatures have dropped like a rock and it’s quite windy out there. Tomorrow is only supposed to be in the 40s. I know all of you up north aren’t feeling sorry for me one bit!

Thanks to blogger Judy for identifying the birds in my last post. They are Black-bellied Whistling Ducks. I found a brochure about the birds of the area, and they are listed as being common and year round residents.

Wow, this entry has become quite long enough!