We are leaving Yuma tomorrow morning, heading to Seattle where we will begin our Alaska adventure. Our trek will be at a leisurely pace, with ten nights total to get there. Our first stop will be Lake Havasu State Park. This is a place we've not been to yet. One of their claims to fame is The London Bridge. We will also be spending a few nights in Provo, Utah to explore another new place to us, the Salt Lake City area. We have lots of adventures planned for the next few months, so stay tuned.

Since the resort is practically a ghost town, we have brought the fifth wheel down to our park model, and parked it in the road in front of our place. You are actually allowed to do this for up to three days when loading or unloading. Since our fifth wheel is so large, we would not do it if our neighbors were here. All of those around us have left, so we can take up all the room we need.

We turn off the power and water while we are gone. So, all food has to be moved over. Also, since it gets so hot here in the summer, we are moving most of our clothes as well. It's kind of like moving, without having to move any of the furniture. In two days, we got everything packed, and the park model summerized.

Here are our two homes parked next to each other. They both are actually about the same size. The park model is somewhat bigger because it has the added on Arizona room. We're very happy with both of our homes! 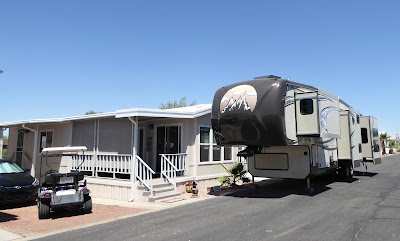 Brad came over and put the finishing touches on the kitchen cabinets. He added crown molding at the top, and decorative pieces of wood to give them a Southwest look. We also added the knobs. I am so happy with how they turned out. Brad is a master at his craft, and we will never be able to thank him enough for his gift of time and talent on this project. We paid for the materials, and I made a quilt, bed runner and pillows in exchange for his labor. It just doesn't seem enough. He told me he loves doing it, and misses it when he doesn't have a project to work on. That's how I feel about quilting, so I get it. Here is a sample of what they look like finished. 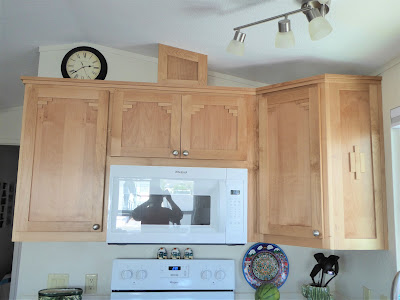 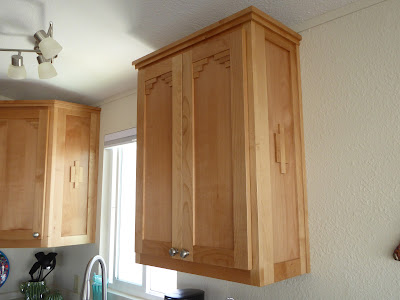 We've been out golfing several times in the last few weeks with Brad and Martha, and friends that are still here at the resort. One morning, the sprinklers came on just as we were getting to the ninth green. Kevin was already on the green, so he dodged them to finish putting. The rest of us were not on yet. We waited until one of the groundskeepers came and turned them off. They use reclaimed water from the treatment plant, and we didn't want to get wet with that water. Too funny! 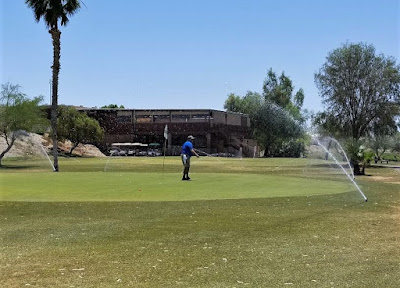 I'll try to blog more often in the coming weeks. We're very excited about the upcoming adventures. I'm also very much looking forward to seeing the kids again. It will be about 8 months since we saw them, and that's just too long!

Don’t wish upon a star – Reach for one!
Posted by RV Khronicles of Kevelyn at 10:56 AM 3 comments: