Invasion of the Flies

We had the strangest thing happen a few nights ago.  Kevin was grilling supper outside, and there were a bunch of flies around.  We didn’t think much of it since we’ve had flies bothering us since July.  Well, the flies just kept coming and coming.  The whole side of our camper was covered with them.

Kevin brought the supper in along with dozens of flies.  After that, we didn’t dare open the door.  They were everywhere including all over the outside of the window screens.  Take a look. 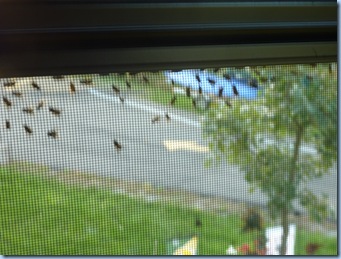 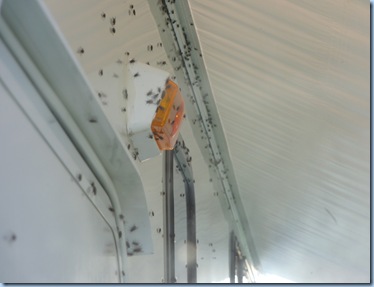 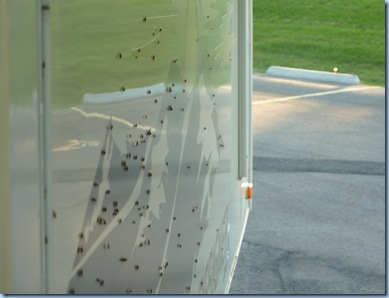 I took the pictures from inside.  I wasn’t going out there.  We figured the food must have attracted them, and they’d go away once it got dark.  But, they didn’t.  They were still there in the morning.  Kevin had to take a broom and brush them all off.  Many were dead; some were still alive.

We don’t know what to make of it.  Maybe it was their last hurrah since there haven’t been many flies since that night.  Maybe it is some sort of dying ritual.  All I know is it was really strange!

We’re leaving our camphosting position today.  We’re camping with our camping club this weekend, taking the camper in for repairs on Monday and then heading towards Colorado.  I’m excited for the next part of the adventure to begin!!!

I wish everyone a terrific weekend.

Posted by RV Khronicles of Kevelyn at 9:52 AM 5 comments: Links to this post