We began our exploration at the Joshua Tree Visitor Center.  A very nice park ranger gave us some suggestions of things to do.

The park actually includes areas in two different deserts.  The northern section is considered high desert in the Mojave Desert, and that’s where all of the Joshua trees are located.  We drove for many miles through forests of these trees.  It was certainly the strangest forest I’ve ever seen.

Joshua trees are part of the Yucca family.  We’ve seen them in other areas, but none as concentrated as in the park.

As with all the deserts we’ve seen, they are not just flat areas of sand.  There are many hills and mountains as well as large rock formations. 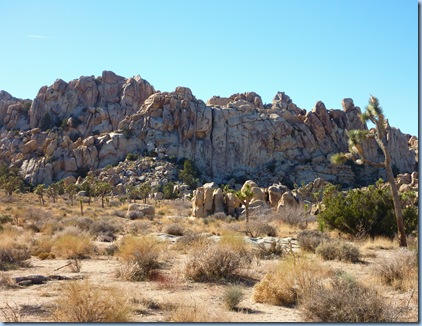 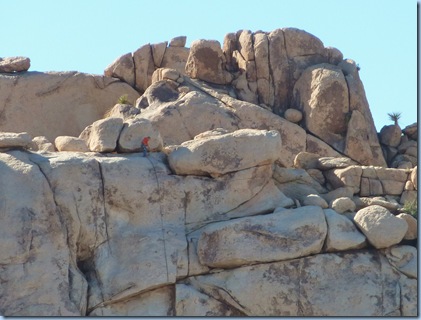 We hiked the 1 mile loop Barker Dam trail.  It takes you to a concrete dam ranchers built in the late 1800s.  The current average rainfall is about 6 inches a year.  Back then there was more rain, and the desert had great cattle grazing fields.  In the early 1900s the weather patterns began to change and the area could no longer support cattle.

Just about that time gold fever struck.  Many claims were staked, but most never hit it big.  There are still mines throughout the park.

The dam was not much to look at, but I did like this view of the snow-covered mountain in the distance. 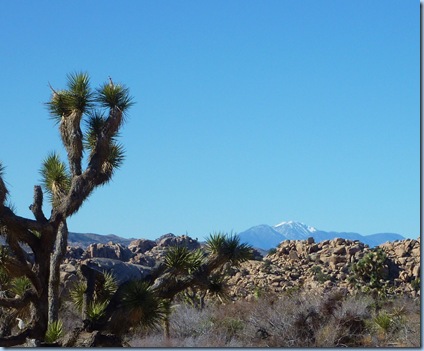 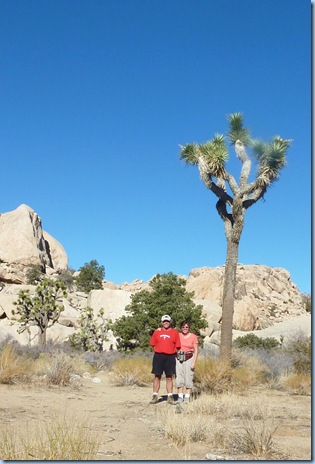 Here we are under one of the Joshua trees.  You can see how big they are.  I love the timer on my camera!

We participated in a 1.5 hour ranger tour of the Desert Queen Ranch.  It’s only accessible with a ranger, and the $5 tour price was well worth it.

In 1910 Bill Keys came to the ranch as the caretaker.  After two years, the owner died and Bill claimed the ranch and mine for unpaid wages.  He and his wife lived there until 1969 and raised 5 children.  They were very resourceful people.  They grew their own food, made a little money from the mine, got paid to process ore for other gold miners, and collected stuff from surrounding abandoned homesteads.

Here’s a sample of the stuff they had in their junkyard. 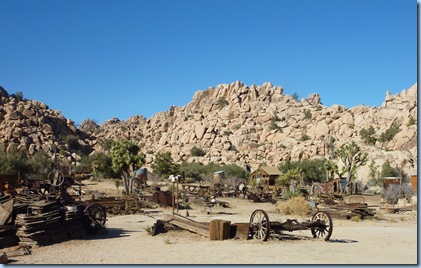 As they had more children, they added onto their house.  Here’s what it looked like when they died.  Next to it is a storage/tool shed. 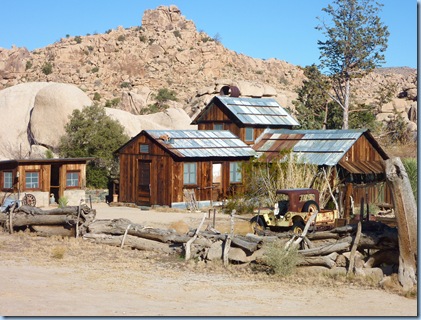 I love hearing the stories of these pioneer people.  I’m always so amazed at how hard they worked and how resourceful they were!

Next we drove to the Keys View overlook.  The ridge/ledge area in the center of the picture is part of the San Andreas fault.  According to the sign we read, this area moves two inches every year.  Wow!  In the distance are the Santa Rosa Mountains. 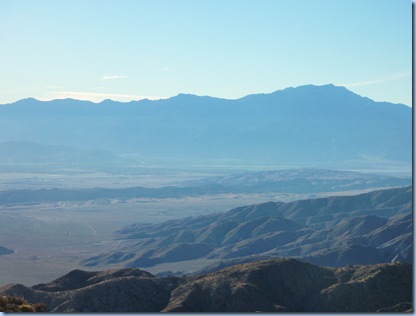 To the south is the Salton Sea.  Signal Mountain is near the US/Mexico border.  It’s too bad pollution causes such a haze. 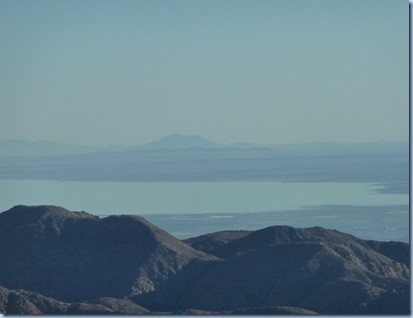 We continued following the main road to the southern half of the park.  This is where you enter the Colorado Desert.  What a difference.  This is considered low desert and reminded me a great deal of Death Valley.

We passed this area called Cholla Cactus Garden.  They look so fuzzy, but don’t touch! 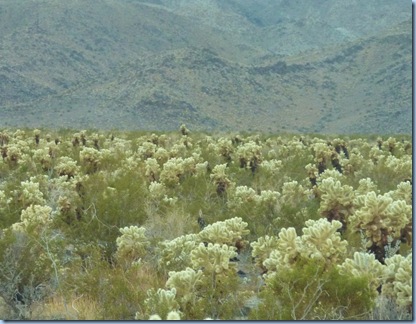 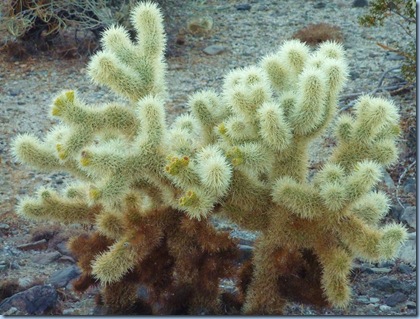 We arrived at the south end of the park just as it was getting dark.  Another wonderful day!

Today is the last day of the record breaking warm temperatures.  Tomorrow is expected to be in the 60s and rain is coming for the weekend.  I know none of you are feeling sorry for us :)  We sure have been blessed with fantastic weather.   I hope it’s nice when the boys come next week.