A Great Day At The Ball Park

Yesterday we attended the Milwaukee Brewers Spring Training Opening Day Game at Maryvale Park against the San Francisco Giants.  It was a beautiful day with temperatures in the mid 60s and sunny.  When the sun shines here in Arizona, it feels warmer than the temperature indicates, as long as the wind isn’t blowing too strong.

The ball park sells lawn seats for $8.  A few years ago when we were out here, we learned that you can sit on a grass hill all around the outfield and get a very good view of the game.  We brought our blanket and thoroughly enjoyed sitting in the sun and watching the game. 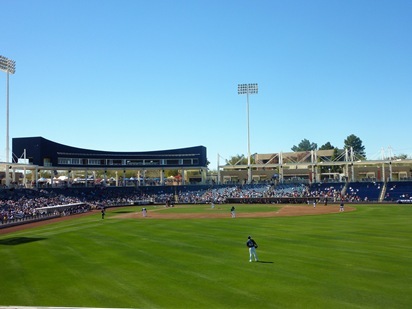 As you can see, there wasn’t a very big crowd.  We were actually surprised there weren’t more people for the opening game.  We’ve heard from other people, that no one objects if you go sit in the stands if you buy lawn seats.  Obviously, it would have to be an unsold seat :)  As it gets hotter, we may try sitting in some of the shaded seats if we get too hot.

For now we were happy to sit on the grass and enjoy the sun.  We sat behind right field hoping to catch a Prince Fielder home run.  No such luck this time.  This was a split squad game so half the team was playing at the White Sox facility.  Our squad lost.  Oh well, we’re going again tomorrow.  They play against the Cubs.  It should be fun!

Even the racing sausages were in attendance.  And my favorite, Bratwurst, won. 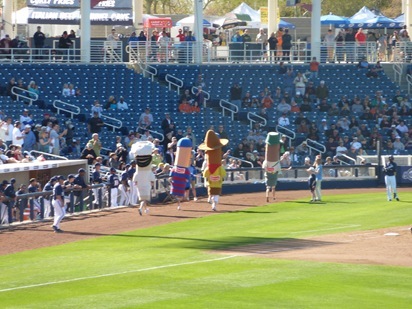 We had some coupons for a fast food restaurant named Weinerschnitzel.  We’d never heard of it so we gave it a try after the game.  They mostly serve chili dogs.  I had a polish sandwich, and Kevin had a chili dog, chili hamburger and chili fries  He shared some fries with me :)  The food was okay, but nothing to get excited about.  We won’t go back.  We actually prefer to eat at home.  I rarely have a meal at a restaurant that I think was better than what we make at home.  And it’s usually much more expensive!

Today we road our bikes to Wal-Mart.  It’s about a 3 mile round trip.  I have a carrying pouch on the back of my bike so we were able to buy a few items.  Such an exciting day.

Merikay asked about KW hours.  Here’s what we’ve learned.  Most campgrounds charge extra for electricity if you rent by the month.  In Yuma we paid 16 cents per KW hour.  Here we’re paying 9 cents.  Obviously, rates differ greatly.  If we run everything on electric including an electric heater, we use about 30 KW hours a day.  If we run the furnace and water heater on gas, we use about 12 KW hours a day.  Depending on the price of propane, it’s usually cheaper to run heating elements on propane.  Someone told us the formula to figure it out is that one gallon of propane is equal to 22 KW hours of electricity.  So, based on that we’re currently running our water heater on electric, but using the furnace for morning heat because it is more efficient than an electric heater.  Hopefully, that explains things.  It’s probably clear as mud :)

Posted by RV Khronicles of Kevelyn at 5:29 PM 3 comments: Links to this post