After leaving Arizona, we made our way to Lincoln, Nebraska to visit with our son and his wife, Korey and Cathryn. We hadn't seen them for about six months, so were very happy to get some much needed hugs and time together.

While we were there, Korey and Cathryn attended an awards program where she was given a medal for her role in saving a woman who had been in a severe car accident. We're very proud of her!!

We stayed in Nebraska for six days, and it was extremely windy for almost the entire time. We enjoyed some dinners together and played some games. On Sunday, the winds died down enough to play a round a golf. It turned out to be a great day. 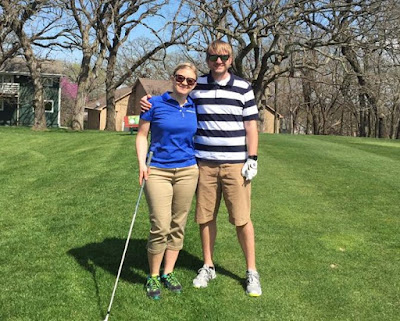 We arrived back in Wisconsin on April 13th. As soon as we had the RV parked, we headed to the parks office to pick up our paperwork for the annual employment drug screen. We made our contribution at Beaver Dam Hospital on Wednesday afternoon, and weren't able to start work until the following Tuesday. Seems like a long time to get those results.

Since we were off for the first weekend, we took advantage by going to fish fry with some friends on Friday night, Kevin played cards with his card group on Saturday night, and we spent the day with Eric on Sunday. Such a great weekend catching up with friends and family.

There must have been some very strong winds, as well as an ice storm over the winter. We had LOTS of branches and sticks to pick up around the park. The grass was already quite long, and we had almost a full campground last weekend. Kevin was able to get the sites mowed for our campers.

Five of the sites were occupied by members of the Jaybirds camping club we used to belong to before we went full time. It was great to have them join us for a weekend. A few of the guys went golfing on a beautiful Saturday afternoon. We enjoyed lots of fellowship and, of course, some good food. Here's part of the group at our Saturday potluck dinner. 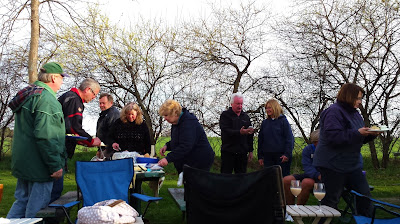 This week winter is trying to make a comeback. Highs are expected to be in the high 40s to low 50s with clouds and some rain. At least it isn't supposed to get down to freezing at night. Time to get some sewing done.

Don’t wish upon a star – Reach for one!
Posted by RV Khronicles of Kevelyn at 8:51 AM 2 comments: